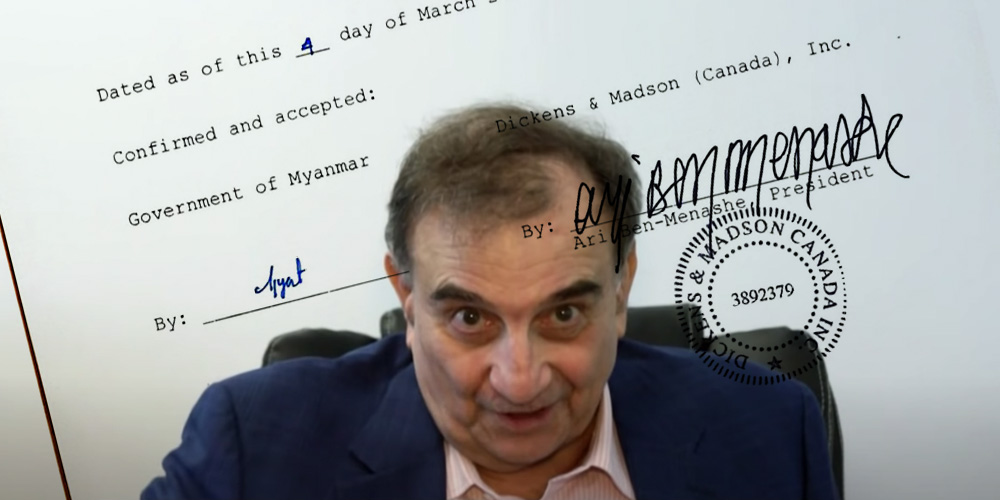 Deadly Coup In Myanmar Is This Man’s Payday

There aren’t many people in the world like Ari Ben-Menashe.

“I think it’s fair to say that it’s very unusual for people who do this kind of work to be so public about it,” says Julian Pecquet, the founder and editor of Foreign Lobby Report.

Earlier this month, Pecquet broke the news that the Montreal-based Ben-Menashe had been hired to lobby the United States and other governments on behalf of the military leaders who recently staged a coup in Myanmar. He got the story because Ben-Menashe had proactively reached out about it.

“Why do you think he’s so forthcoming?” host Jesse Brown asks on today’s episode of CANADALAND. “Do you think he likes the publicity?”

“I do, yes,” Pecquet says, chuckling.

Ben-Menashe, who runs the firm Dickens & Madson, has been termed “the warlords’ favourite lobbyist.” Less charitably, he might be called the Forrest Gump of statecraft, living a life that has improbably intersected with more than a few of the most infamous foreign-policy incidents and controversial regimes of the past four decades.

And you can just call him up. So we did.

This week’s CANADALAND features an interview with Ben-Menashe — about his wild Wikipedia profile, his peculiar line of work, and how he can possibly justify representing the military regime in Myanmar. When military leaders hire PR agents, you get a crash course in the rhetorical strategies employed to defend the indefensible.

“No, no, we are not PR agents!” he protests at one point. “We’re trying to put the facts out publicly.”

In a March 8 filing with the U.S. Department of Justice, however, his firm explicitly described part of its work for Myanmar in those terms. In addition to lobbying, Dickens & Madson would “provide media and public relations services to further the country’s goals and activities.”

According to the disclosure under the Foreign Agents Registration Act, Myanmar is to pay Ben-Menashe’s firm $2 million USD — “when legally permissible by controlling jurisdictions.”

A wrinkle in the arrangement is that the military leaders now in command of Myanmar are the subject of sanctions by the United States and Canada. These include Defence Minister Mya Tun Oo, who according to the registration is Ben-Menashe’s principal point of contact. But Ben-Menashe is of the view that as long as his firm doesn’t receive payment until such time as that would be legal, then he would not be running afoul of the sanctions he is lobbying to have lifted.

In an email, Global Affairs Canada says they are “aware of reports concerning a Montreal-based company potentially in contravention of the Special Economic Measures (Burma) Regulations.”

They note that the sanctions “prohibit any person in Canada or Canadian outside Canada from engaging in any activity related to any property, wherever situated, held by or on behalf of a listed person, or from providing any financial or related service or entering into or facilitating any transaction in relation to such an activity. It is also prohibited to make any goods available to a listed person or provide any financial or related service to them or for their benefit.”

(Global Affairs did not address a question concerning Ben-Menashe’s statement to Reuters that he could obtain a license from the government to accept the payment.)

One thing we wanted to find out was how he feels about QAnon adherents having specifically cited the coup in Myanmar as an example of what they’d like to see unfold in the U.S., with the military swooping in to depose an elected leader and detain their political opponents.

NEW: Some QAnon believers and Trump supporters are now cheering on the military coup in Myanmar, hoping it will happen here. pic.twitter.com/nfPapJaZRF

He seemed offended by the question: not just by the invocation of QAnon, but by the idea that a coup took place in Myanmar at all.

“There was no military coup in Myanmar. Please,” he says. “Please don’t try to demonize the generals. This is exactly the type of things you journalists have been doing. ‘Oh, the QAnon.’ What was one has to do with the other? If QAnon says some rubbish, do we have to accept it? Okay? Please. These guys didn’t do a military coup. They, they… took over.”

“What do you call it?” asks Brown, looking forward to learning Ben-Menashe’s preferred euphemism.

He eventually settles on “government changeover.”

Original Ben-Menashe screencap from a video on a YouTube channel whose name translates as “Tunisia National Youth Movement.”

Updated on Monday, March 15, at 9:08 a.m. EDT, to expand the discussion of Ben-Menashe’s foreign-agent registration and to revise the headline.