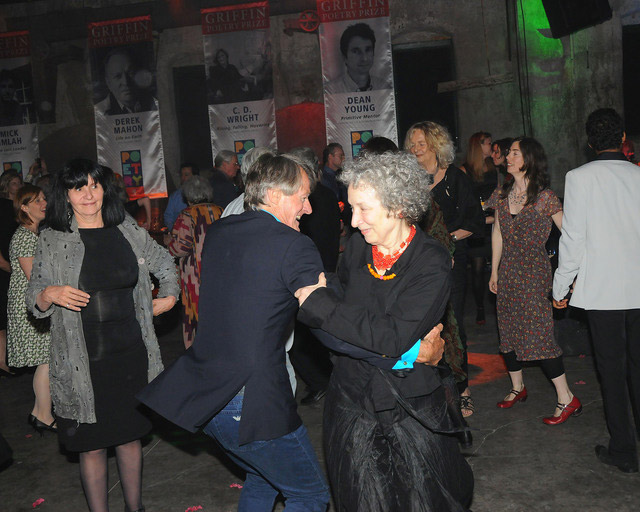 Griffin Poetry Prize founder and bankroller Scott Griffin is no longer associated with General Kinetics Engineering Corporation, the manufacturer of shock absorbers for armoured vehicles destined for Saudi Arabia as part of Canada’s $14-billion arms deal with the country, a spokesperson for the Griffin Poetry Prize has confirmed. 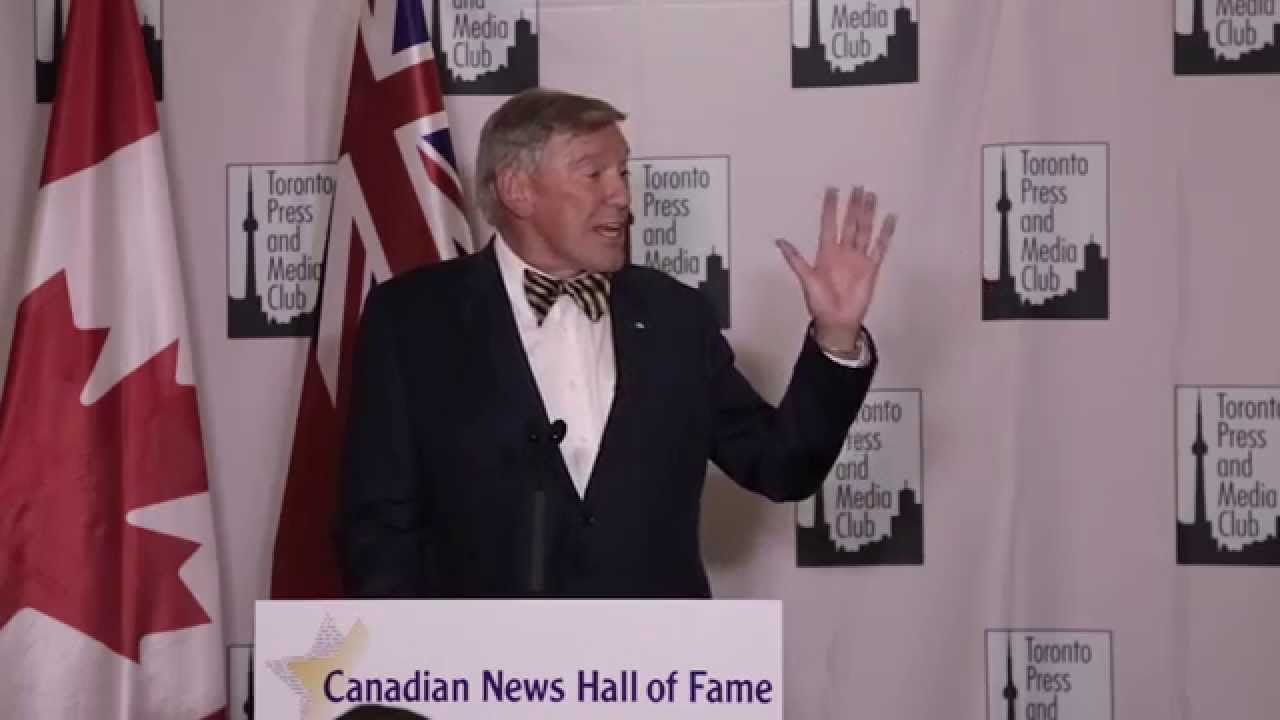 The Canadian News Hall of Fame has no hall, no wall, and many people in it are not that famous. A CANADALAND investigation reveals that we are at least 60% sure it actually exists.
You might not be able to visit it (and really, let’s take a sober moment and imagine the visitor count if it existed), but for a cool $250 you can attend a gala and watch the organization welcome two more veteran media journalists into its fold.

Where do you even start with the ‘canadian news hall of fame.’ pic.twitter.com/XTvnNOIBV1
— Josh Visser (@joshvisser) November 10, 2015
At least, we’re pretty sure you can. A look into the Canadian News Hall of Fame, inspired by the above poster, brought up more questions than it answered. Where is the hall of fame? Does it have a website? Who are the men running it? And why is one of the email addresses quaich@bell.ca? Is the Toronto Press and Media club even real? We tried to get to the bottom of it.
It turns out that next Tuesday, CBC’s Peter Mansbridge and Postmedia’s Paul Godfrey will be inducted into the Canadian News Hall of Fame at its annual gala in downtown Toronto. If the 160-person, sold-out event is anything like years’ previous, it promises to be a real party. Last year’s event, sponsored by the Toronto Star, honoured Torstar chair John Honderich and CTV chief political correspondent Craig Oliver, and had the newly elected Premier Kathleen Wynne as a celebrated guest. This year’s main sponsors are Postmedia and RioCan.

Paul Godfrey “soon to be installed in the Canadian News Hall of Fame for his contribution to Canadian journalism” — LOL, as the kids say
— Jeet Heer (@HeerJeet) November 10, 2015

Mr. Godfrey, soon to be installed in the Canadian News Hall of Fame for his contribution to Canadian journalism’ Why? Who votes for this?
— gnomeoffender (@gnomeoffender) November 9, 2015
Our efforts to find out more about the organization first led us to its website with the hope of learning how the winners are chosen. It gives an error message (a Facebook post from last year says a new site is under construction), but longtime organizer and president of The Toronto Press and Media Club, Ed Patrick, said in an email that the selection process is simple. The group invites nominations and those nominations are distributed to a list of selectors where they are ranked and awarded points. The two nominees with the highest number of points are selected for induction that year.
“It has always been done in this fashion,” he said.
“The selectors are mainly retired journalists and members of the News Hall of Fame. Current selectors include: Murray Burt, Trina McQueen, Lloyd Robertson, Andy Walsh, Boris Spremo, Les Pyette, Craig Oliver and John Honderich,” said Patrick. “At one time we had selectors from almost every province, but as they passed on they were not replaced by a suitable candidate in their province.”

About time! RT @CTVNationalNews: Craig Oliver Inducted into Canadian News Hall of Fame http://t.co/mo8pTfumlU pic.twitter.com/km252cyQMF”
— Taylor Curley (@tay_curley) October 16, 2014
The Canadian News Hall of Fame has been a thing since 1965 and has honoured over 100 important Canadian journalists and media contributors in that time, although it took a break from handing out plaques in the early aughts — at the same time as it grappled with hard times in the organization and its founding club, The Toronto Press Club (now known as the Toronto Press and Media Club).
In 2011, the organization’s founder and president, Ed Patrick, who is also in charge of a malt whiskey appreciation society, the Quaich, faced backlash from outside journalists over how the Hall of Fame was being run. The drama included an article in the Toronto Star, which, according to a release on Patrick’s website from October of last year, led to Patrick launching libel action against the Star and winning a retraction and apology in 2014. The dispute was over the facts of the article itself. According to the press release, it was “full of mistakes.”
Here’s what Patrick tweeted after his libel victory:

Celebrating winning an apology from Stacey Chopak in a libel action. Moral: Don’t believe everything you read in the newspapers!
— Ed Patrick (@CanadaQuaich) October 8, 2014
Shortly after celebrating his libel action against the Star, Patrick was celebrating at the Canadian News Hall of Fame 2014 Gala sponsored by the very same paper. The awards had been back on since 2012, even though there still wasn’t a wall of fame.
The lack of a way to view the plaques still irks veteran journalist John Miller, author of The Journalism Doctor blog and writer of a 2011 post questioning the future of the Canadian News Hall of Fame. Miller was a member of the ad hoc committee of journalists that tried to shake things up at the organization that same year.
“We were not members of the press club, just journalists concerned that the hall of fame was packed away in someone’s closet and hadn’t installed anyone for years,” said Miller in an email Tuesday.
“[I do not] have any confidence that members of the public will ever be able to view plaques or visit the Canadian News Hall of Fame, thereby rendering it useless,” he said.
He said his group tried to get the organization to “be more active and accountable to the journalistic community,” but the group stopped meeting after a “hostile” reception by Patrick and his colleagues.
Miller also questioned the legitimacy of the awards. “It is not clear how new members are chosen. I have no evidence that convinces me that these awards are legitimate at the present time. None of the organizers appear to have any journalistic credentials that qualify them to choose new members,” he said.
But “at least they are adding people again,” said Miller.
Patrick dismissed Miller’s criticism, noting “John Miller was part of the group that wanted to take over the News Hall of Fame. They were mightily pissed off when the TPC declined to hand it over to them.”
Patrick said the organization is raising money through the gala so it can eventually have a physical space to showcase the Canadian News Hall of Fame plaques and other historical artifacts. He refutes the suggestion that the organization was ever in disarray and said the group would continue to operate the News Hall of Fame until it found a sponsor and a suitable location for the hall.
“At one time, INCO Ltd. was the sole sponsor of the Hall and paid all the costs of running it,” said Patrick. “When the Ontario Club folded, we lost our press club room, which housed the hall plaques. These have been in storage ever since, while we hunted for a new location. Ideally, it should be housed in a Downtown Toronto location where journalism students and the public at large would have access to it. The City of Toronto and Ryerson University were unable to offer us space for it. We continue to search for a sponsor and a suitable location. White Knights are few and far between these days.”
2015 News Hall of Fame Leaflet

Community News Election Stories You May Have Missed

CANADALAND read through community newspaper coverage so you don’t have to. Here’s what we found.