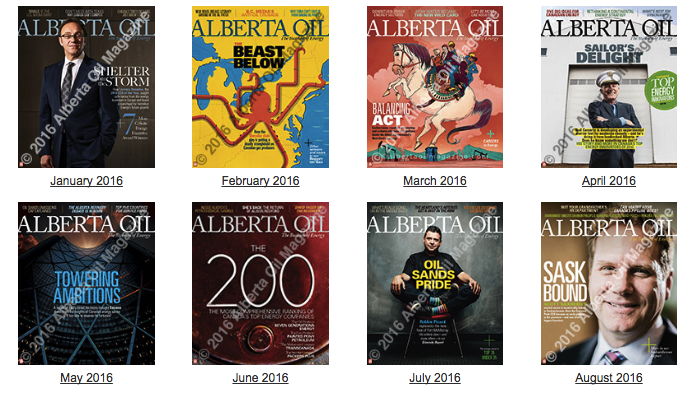 When freelancer Jessica Lockhart’s unpaid invoices for Alberta Venture hit nearly $5,000, she hired a lawyer. The Toronto-based writer’s work started appearing in Alberta Venture and Alberta Oil, Venture Publishing’s flagship magazines, in late 2012. The editors were strong, she was given an opportunity to write features, and she could explore interesting topics. The catch? Her editor told her she shouldn’t expect payment for six months post publication.
“I wasn’t paid for any of this work within the agreed to ‘six months of publication,’” Lockhart said. Her invoice for the first batch of stories she wrote was finally paid out after a year — and only after she bluffed, threatening legal action.
She continued writing for the magazines. And again she wasn’t paid. “By February 2015, I was owed $4,900, with some of the invoices having been issued a year prior,” she said. “I sent dozens of nagging emails and left voicemails, with no response.”
Lockhart didn’t know what to do. She didn’t want to damage her relationship with the editors, or her broader professional reputation by causing a fuss.
“You can’t risk complaining about anything, because it effectively means risking your career.”
Finally, she hired a labour lawyer who sent a letter to Venture, in February 2015, informing them of Lockhart’s intent to pursue legal action. This time, she heard nothing. In April, Lockhart and her lawyer sent another letter indicating the exact dates they were planning on submitting small claims paperwork. Only then was she paid. She’s not the only writer who was owed thousands for her work.

“Thousands” is the default when it comes to what freelancers are owed by Venture. Their flagship product, btw, is a business magazine.
— Michael Hingston (@mhingston) August 16, 2016

Venture is a publishing company based in Edmonton. It owns the flagship Alberta Venture, a business magazine; the later-acquired Alberta Oil; and the now-defunct Unlimited, a business mag aimed at twenty- and thirty-somethings. (Full disclosure: I have written for all of these magazines in the past and have been owed money.) They also publish magazines for corporate or association clients.
These magazines, and their stories and graphics and design, won awards. The editors were talented, and devoted to quality and innovative storytelling. And then, slowly, around 2008, the writers stopped getting paid.
In June 2008, at height of the oil boom, Venture bought Alberta Oil magazine. With Alberta being a boom-bust economy, oil went bust, advertising dried up, and Venture was weighed down by considerable payments for the magazine. Meanwhile, VP’s corporate clients were also hurting and letting their invoices slide. One former editor pointed out that if these clients were to pay their bills, some of which are in the six figures, Venture wouldn’t be in trouble at all.
James Wilt has been working as a freelance writer since March 2015. He lined up a few stories for Alberta Venture, little pieces at first. Like Lockhart, he enjoyed working with the editors and saw the clips as important for his nascent career. Soon he was writing feature stories. And he, like Lockhart and so many others, wasn’t being paid in any remotely timely manner.
“They produce nice-looking stuff, and if you’re a young writer… they end up fucking you over,” he said. “I make $15,000 to $18,000 a year. When I have five or six thousand dollars outstanding, that’s a third of my annual income.”
More than a few contacted for this article refused to go on record out of loyalty to Venture Publishing’s CEO and president Ruth Kelly. Kelly is trying to make her business flourish in the unwieldy economic reality of Alberta’s resource-based economy. Last fall, the Edmonton Journal named her one of the “Power 30” in Alberta’s new, NDP-inflected political landscape. She’s been consistently lauded for her work: in 2013, Alberta Women Entrepreneurs awarded Kelly the “Celebration of Achievement” award.
But writers complained about being paid 6–8 months post publication after regular emails and phone calls. Some resorted to threatening small claims court. One person mentioned a sit-in someone staged. Almost all preferred not to go on record, professing loyalty to the magazines, editors, and the opportunity to write complex and nuanced stories about their home province.
Kelly herself is blunt. “We have always paid our writers,” she said. “The work they do is worthy of compensation. Is there a longer lag time [to payment] than any of us would like? Absolutely. But we have never not paid a freelancer in 19 years.”
She points out she runs an independent media outlet, one devoted to perspectives oftentimes unsung in mainstream media — and that the larger media companies hardly behave scrupulously towards freelancers.
“An independent company like ours is not eligible for the kind of support that a Roger’s or a Transcon or a St. John’s media is eligible for,” Kelly said, referring to the government subsidies those companies get.
“The current economic conditions are one thing that [affects] advertising payments. … Everyone is struggling. I talk to businesses every day. And I haven’t talked to anyone who isn’t struggling. I hear of people closing doors, laying people off, or looking for new markets because cash flow has been reduced to nothing. And those are our clients. Then layer on the changing media landscape and it’s a particularly fraught time.” She has confidence that, thanks to the diversity of VP’s products, they’ll survive.
One writer who has frequently written for Venture Publishing said, “Local publishing in Alberta is so small that I think [Venture Publishing] is quite a pillar. It might be a cracked pillar, a faulty pillar, but they’re such an important part. If you remove them from the equation, it could be disastrous for the livelihood of freelancers.
“That said, not being paid for 6-15 months post publication is pretty dire for freelancers too.”
***