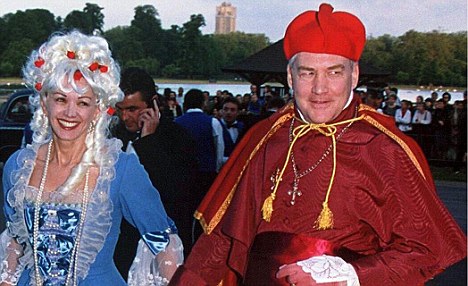 Barbara Amiel wrote one of the most appalling and bizarrely worded instructional columns on black uplift ever produced at the ends of white fingertips.
By Andray Domise
Share

Last month, Michelle Obama delivered a graduation speech for Tuskegee University, an historically black university whose namesake is fraught with the accomplishments of brave airmen, and the practical horror of scientific racism. To the class, she offered the following:

You don’t have to be President of the United States to start addressing things like poverty, and education, and lack of opportunity.  Graduates, today — today, you can mentor a young person and make sure he or she takes the right path.  Today, you can volunteer at an after-school program or food pantry…But just like all those folks who came before us, you’ve got to do something to lay the groundwork for future generations.

She also said this:

(Over) the years, folks have used plenty of interesting words to describe me.  One said I exhibited “a little bit of uppity-ism.“  Another noted that I was one of my husband’s “cronies of color.”  Cable news once charmingly referred to me as “Obama’s Baby Mama.”

Apparently these messages of responsibility to self and heritage, overcoming long odds, and legacy-building were not enough. Barbara Amiel was somehow rankled on behalf of baby mamas by Michelle Obama’s anecdote, and proceeded to write one of the most appalling and bizarrely worded instructional columns on black uplift ever produced at the ends of white fingertips (while it was published in print over a week ago, Macleans is yet to put the article up online). 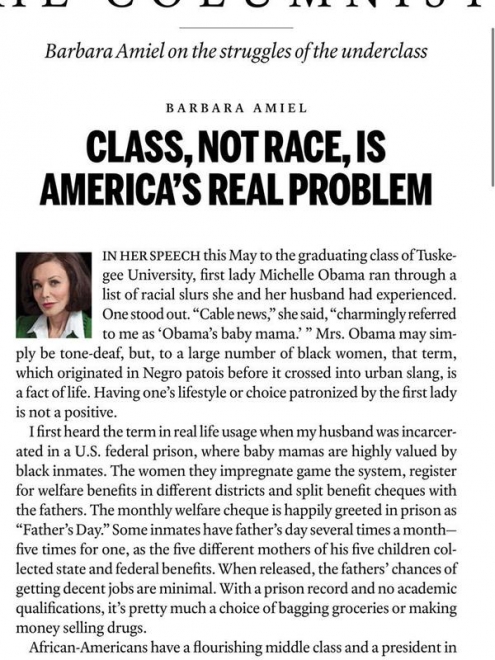 The amount of unpacking it would take to explain what’s wrong with this column could fill a textbook on critical race studies. One could talk about the combination of ignorance and gall it takes for a rich white plutocrat to imagine herself in the shoes of a Tuskegee graduate being addressed by a black First Lady – the first in American history – and deign to call her “out of touch.” One could talk about what kind of person conjures up the phrase “negro patois” without immediately filing it in the “to shred” corner of her imagination, much less submitting it for publishing in Canada’s weekly magazine of note. One could also marvel at the idea that, while white news pundits labeled First Lady Obama a “baby mama” to denigrate and infantilize black motherhood, Amiel believes Obama is in the wrong to take offense at the label.

All of that aside, what strikes me about this column is the overwhelming wrongness of it. Not “wrongness” in the sense that I disagree with Amiel, but the demonstrable falseness contained in almost every sentence in this column. She mentions Obama’s failure to pass sentencing reforms, without mentioning Republican obstinacy in Congress. She mentions Bill de Blasio’s failure to help improve law enforcement and affordable housing for black New Yorkers, but omits police officers literally turning their backs on him at the funerals of officers Wenjian Lu and Rafael Ramos because of de Blasio speaking to his experience raising a multiracial family. She also says this:

“African-Americans have a flourishing middle class and a president in the White House. But at the bottom of the heap is an inert black underclass.”

Indeed, there is an African-American president in the White House, and a black underclass exists. But the black middle class certainly isn’t flourishing. The 2008 housing crisis ravaged black America disproportionately, and it has yet to recover. Black Americans, for the most part, experience poverty at a magnitude that white Americans do not share, and possibly never understand. The wealth and income disparities, fueled by over a century of post-Reconstruction economic plunder and political disenfranchisement have created a gulf that’s remained all but insurmountable. The median white household is worth 13 times that of the median black household in America, and almost every black family in the country is one step removed from the projects.

But these aren’t details that Barbara Amiel is forced to grapple with, nor do I suspect is she interested. As is usual with white columnists that have a bone to pick with black uprising, she goes on to explain at length why the issues that haunt and oppress black America – police brutality, mass incarceration, economic disparity – are functions of class, not race. And that black Americans, who fall into the trap of calling their circumstances a product of racism, are short-sighted. The point is not to address the issues that black Americans are forced to deal with, but to pressgang black America into the service of white Americans in the same tax bracket.

This is not new. The “Class, Not Race” argument has experienced a resurgence since Trayvon Martin’s lifeblood poured into Floridian soil, and stronger still since Michael Brown’s body was left to rot in the Missourian sun. But the twisted logic employed to disprove racism as a factor in America’s racial stratification is as old as the union itself. It is not an argument, but a ruse. Black labour has value, but black agency – especially where it can identify the cause of its oppression – does not. There is no honest conversation about black America that can exist without racism, white supremacy, and legally sanctioned theft included in that conversation.

One of Canada’s longstanding traditions is the substitution of ficticious black lives and history, conjured from the imagination or exaggerated from brief anecdotes, for the ones that actually live and breathe and exist. In Amiel’s imagination, we’re to accept her philosophy of black struggle over the descendant of slaves and sharecroppers. We’re to believe in the spectre of black pathology. Of men who hatch ingenious plans with several women to impregnate them, go to jail, and then to receive a cut of  welfare cheques while locked up. We’re to accept that a larger number of white Americans shot by police is proof that black lives do matter. As if the word “proportion” and “percentage” is meaningless, and that data like this means nothing.

But the most appalling part of this essay is what Amiel expects the reader to believe. That black Americans, for hundreds of years subjected to white American’s worst cruelties have no idea what they’re talking about when they discuss racism in policing. That America’s justice system, with its long and ugly history of racist enforcement and outcomes, is equally as oppressive to white Americans. That the word of her husband, a kleptocrat, convicted felon, and known liar could possibly be taken at face value. This isn’t a column on the struggles of America’s underclass. It’s a written demonstration that Barbara Amiel takes her readers for fools.