2021 was a year like no other, except for several of those that immediately preceded it. And as Twitter chugged along on its slow drift from relevance, it continued to reflect that great, gradual unravelling.

Here now is our annual roundup of the best and worst that crossed into our orbit, presented in chronological and no other order:

One show I wish were still on the air is @WilliamShatner's former talk show, Shatner's Raw Nerve. The caliber of conversation is memorable more than a decade later, as is the signature S-shaped chair that necessitated intimacy in the interviews. pic.twitter.com/p3sBZ4loWe

A Rebel fan just asked to take a selfie while we were being actively teargassed.
That's what we call a super-fan

So @JustinTrudeau’s senior advisor just called for people to be thrown out a window to their death. Now, will the PM denounce this incitement to violence? Does this violate any kind of community standard for Twitter. pic.twitter.com/BUhA7EUILY

Which countries might Alberta consider joining, now that Canada has turned its back on us? Here are 4 potential options: Singapore, Netherlands, South Korea, and Israel. All need oil, all need land. Weigh in with your votes, folks. 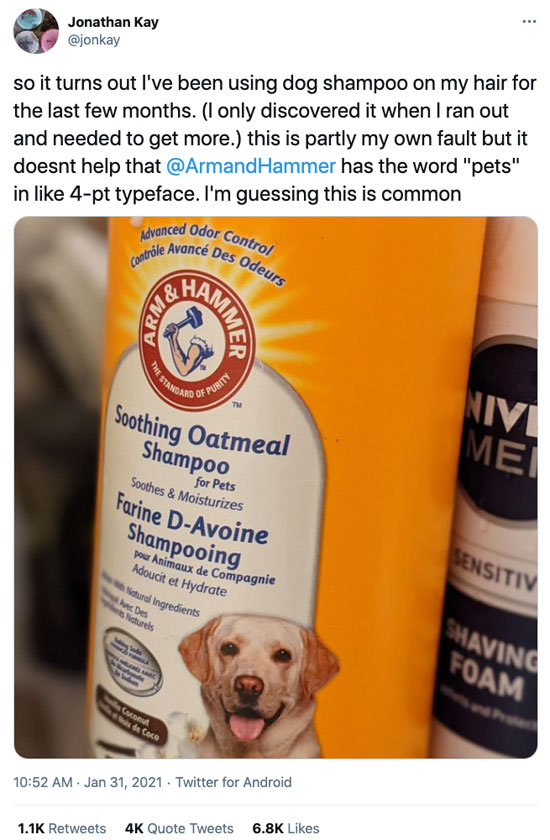 I’m not trolling you. This was objectively stupid. I honestly have no clue who you are beyond this stupid tweet.

For real though, what did you expect the reaction to be? Tons of people being like “yeah I also use dog shampoo by accident! Who doesn’t?” 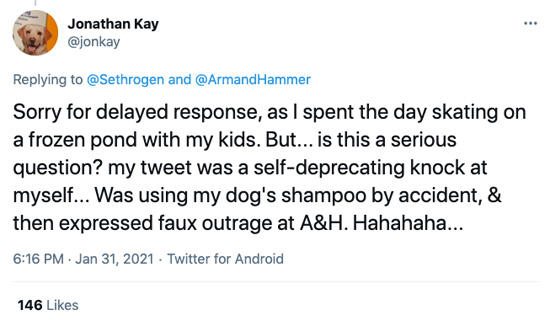 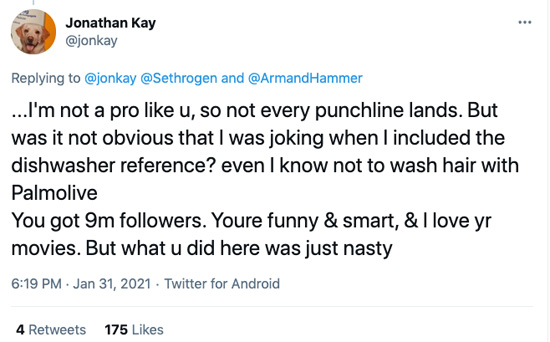 Seth, don't trust @jessebrown, who envy's @jonkay's greater success. Jon is a top journalist, well-known for his quirky sense of humour. I think you should write this train of events into yr next movie script. Jon should play the pet shampoo guy. I should mention I am Jon's mum. https://t.co/W68pWpGIpq

WHAT AN AMAZING #SuperBowlLV!! Congratulations to the (*Bruce, make sure to put the winning team's name here)

Thanks to everyone who stayed home & watched the game w/members of their household. We know this wasn't the usual way to enjoy the game, & we thank you for your efforts. pic.twitter.com/gKD53I2bB9

Surprise your sweetie on Valentine's Day with a video of this guy asking what cover song is better than the original https://t.co/ORA7JGXOlp

this what we're doing in 2021? pic.twitter.com/jwcNrGHoBE 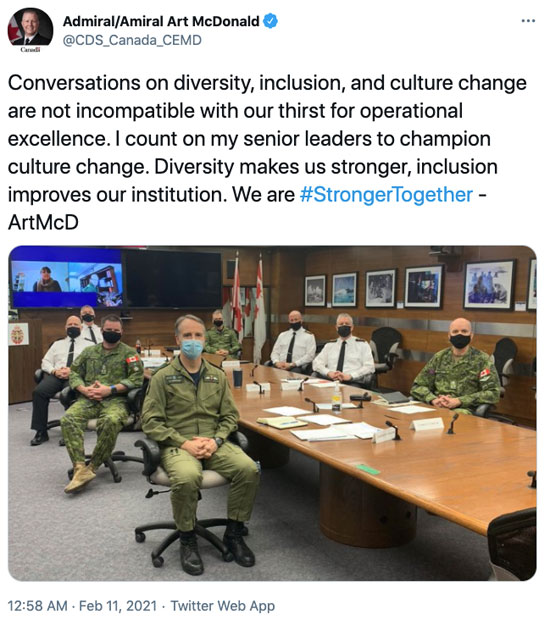 An essay about Anne Frank and lockdown has been removed because it did not meet our standards. We apologize for this error. 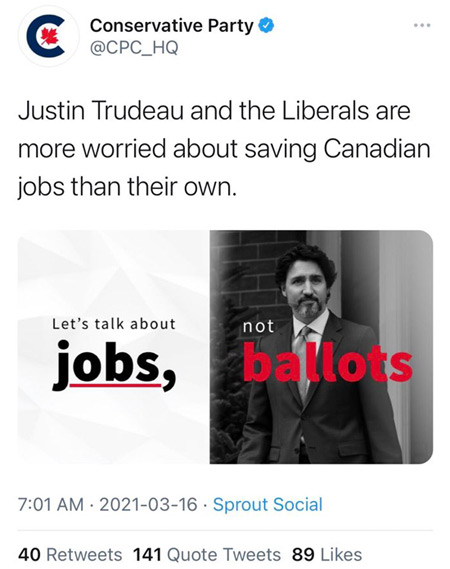 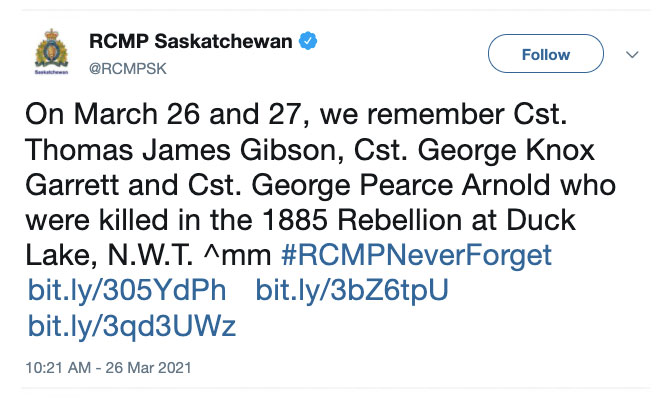 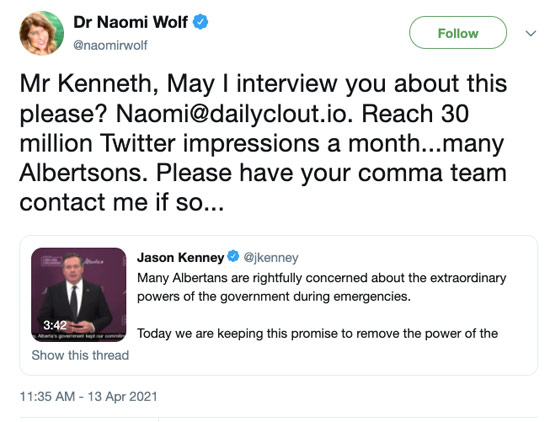 This is the gang that comes after you if you say you tried watching Schitt’s Creek but couldn’t get into it pic.twitter.com/SCHpf0QOwE 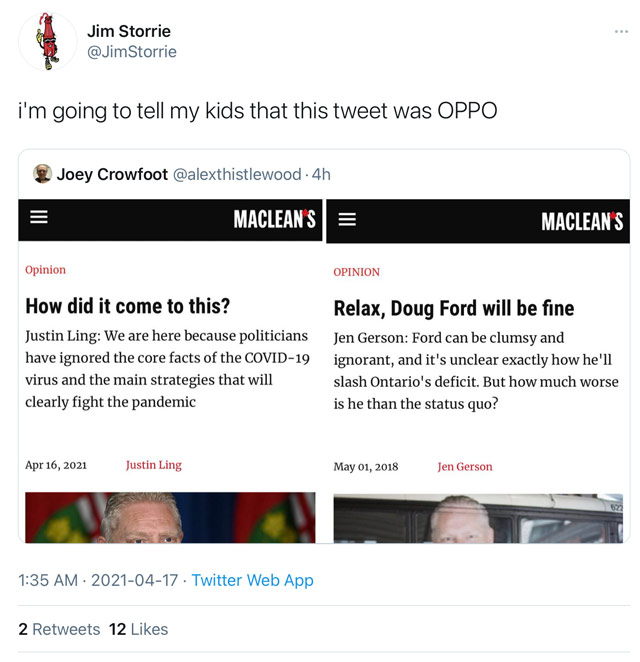 You better quit making up these store names! Home Sense? Loblaw’s? Canadian Tire?! And I’m sorry but “Shopper’s…Drug… Mart” sounds like I had to start an improv scene and wasn’t ready.

No Amazon Prime Day for Canada due to Justin Trudeau’s third wave.

Only India and Canada will miss the massive 2-day sales event, with Amazon citing worsening COVID waves in both countries. #cdnpoli #COVID19 https://t.co/XJa6M9r5j7 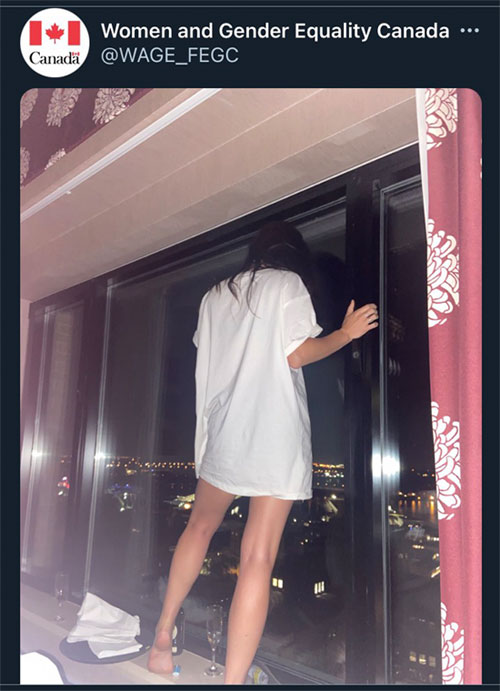 Sometimes I get to spend my evenings monitoring staid Parliamentary proceedings out of the corner of my eye…. and then sometimes, things like this happen. #c10 pic.twitter.com/Ajzp2u0jqr

*looking at you, Cleveland.
https://t.co/PxggNSqLqN

Canadian covid policy parallels the story of Oedipus Rex A perverted destructive relationship between govt (mother) & son (society). Finally resolved by the son (society) murdering the father (constitution) engaging in incest & gouging out his eyes due to shame & guilt #onpoli

I'm a single issue voter and that issue is who can stand the most human and normal.

There is something about Justin Trudeau that infuriates weak men, and men who seem unsettled in their masculinity. It is a psycho-sexual thing, a fury of envy. It is especially strong among men who don't have what it takes to partner with beautiful, strong women. 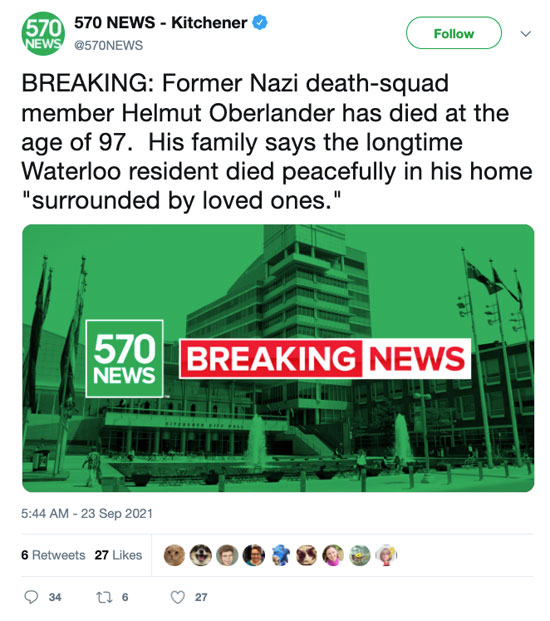 I know this is uncharitable but who seriously who shows up a night at the airport to greet two fellow Canadians who have been horribly imprisoned@for 1000 days with their sleeves rolled up? It’s so affected and tired. #TwoMichaels #cdnpol pic.twitter.com/X4txLqReku

Lethbridge police justifying their purchase of a tank. pic.twitter.com/vRe48IRbcx 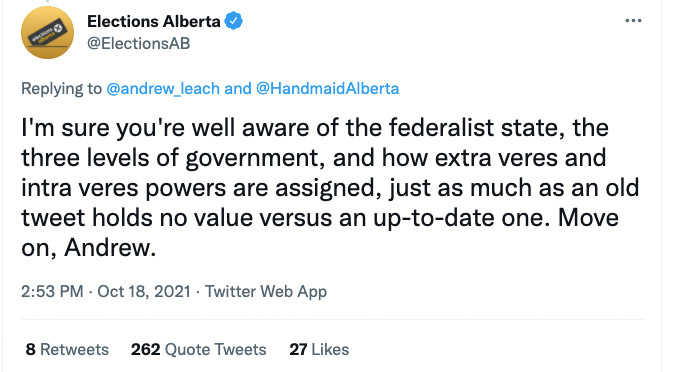 Canada AM has more cabinet representation than Alberta. 😂 https://t.co/hBl9whCkqu

John Tory the son of John Tory who used to work at Torys is advising Ed Rogers the son of Ted Rogers about the future of Rogers which is a pretty good summary of how Canadian business works.

Some are concerned that COP26 will mean an aggressive push toward the total phase-out of fossil fuels. https://t.co/QCX5PpAPgO

Today marks three years since I filed an ATIPP request with the Yukon government, for which I got records the @YukonOmbIpcPidc found were incorrectly redacted. YG refuses to give me the unredacted docs so I still have no idea what they say, but happy birthday, A-7453❤️ #cdnfoi pic.twitter.com/GatOrrTzJk

Why do so many of us CBC reporters speak like this lol 😭 it has taken me years to try and knock this voice out of me and I still do it when I’m nervous like WHY?? pic.twitter.com/A2dSjffZxS

Do you know something about Wiarton Willie? Or any of the dead Willies?
Get in touch. My DMs are open or DM for Signal, WhatsApp, etc. or email LMC@cp.org #onpoli
Please RT

Dear @PnPCBC: These are four pictures of four different queens. They are not the same. They are not interchangeable.
Do better. pic.twitter.com/0InZrDPSzg