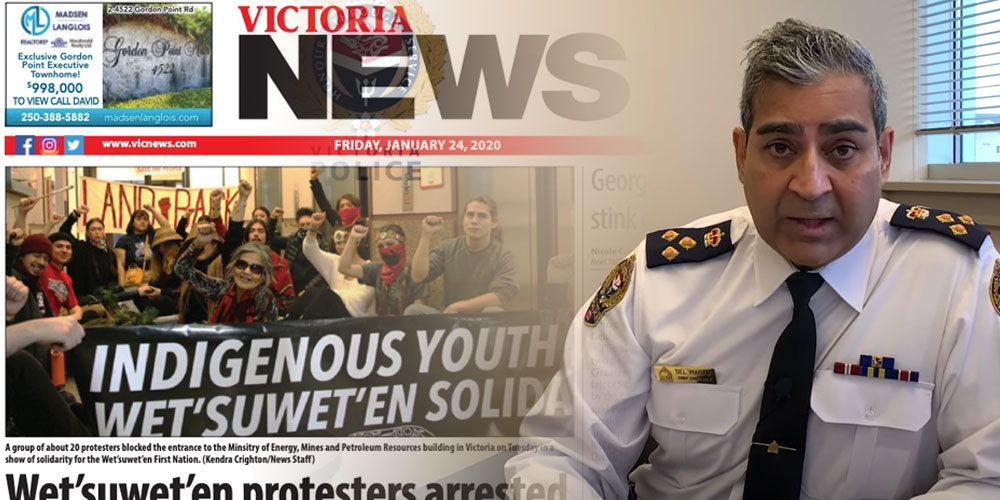 "You were encouraged to talk to the least amount of people as possible" when reporting a story, says a former Black Press journalist
News Brief By CANADALAND
Share

On February 1, 2020, the Victoria News published an interview with Gina Mowatt, a Gitxsan grad student who, in solidarity with Unist’ot’en land defenders, had recently taken part in a sit-in at the offices of B.C.’s energy ministry. Running 695 words, the online article placed significant weight on Mowatt’s account of how Victoria police had been overly aggressive in how they broke up the sit-in and took her and other participants into custody. Although some of the allegations were significant, the article offered no indication of what efforts, if any, had been made to verify them or seek comment.

Six days later, the article was quietly revised. Despite retaining the headline — “Wet’suwet’en supporter ‘heartbroken and terrified’ during arrest at Victoria sit-in” — it was suddenly 300 words shorter, with the details of Mowatt’s allegations removed and a video statement from police chief Del Manak added in. (The earlier version is still here.)

This week’s CANADALAND features a report from Alex de Boer about just what the heck happened there — and what it can tell us about Victoria News‘ parent company, Black Press.

Among those Alex speaks to in the episode are two former journalists for the Surrey-based chain whose holdings largely consist of community publications in BC, Alberta, and Washington state. We agreed to withhold the sources’ names (and obscure their voices) to protect their future employment prospects, since, as one says, “We were told that if we got on Black Press’ bad side, it would be hard to find a job in BC.”

On the show, they offer insights into specific machinations they say led to the post-publication dilution of the Gina Mowatt story. But they also explain the kind of news environment in which all of the above makes sense.

Here’s a bit of that (with the sources differentiated here as “A” and “B”):

Alex: Can you paint a picture of what a typical workday was like for you as a reporter for Black Press?

A: Yeah, so you come in and you probably have about a half an hour to find whatever stories you plan on working on that day, and then there’s usually a morning news meeting. We had to file four to five stories a day, so you’d probably want to get your first story filed by about 10 a.m., in order to keep on that fast pace.

And if you’re writing four to five stories a day, that gives you roughly an hour and a half to write each piece. So what kind of stories are you able to produce in that window of time?

A: Stories with one or no sources, usually. We got a lot of quick turnaround, so it would just be a news release that was emailed to us, and we would just rewrite it, basically.

B: You were encouraged to talk to the least amount of people as possible.…Every single police presser that we got was just literally written verbatim. There were no calls made. There were no quotes to be gotten. Like, you know, if it was a [Victoria Police Department] presser, that was gospel and you wrote it.

A: It was definitely a positive relationship that I think Black Press strove to keep intact. Like, it just seemed like the company always did a little bit extra, went a little bit further to make sure that these organizations, that these bodies in power, were happy with the work that was coming out about them.

Listen to this week’s CANADALAND, “What Is Black Press, And Did Victoria Police Re-Write Its News Story?”

Top image includes the cover of the January 24, 2020, print edition of Victoria News, along with a screencap from Victoria Police Chief Del Manak’s video.