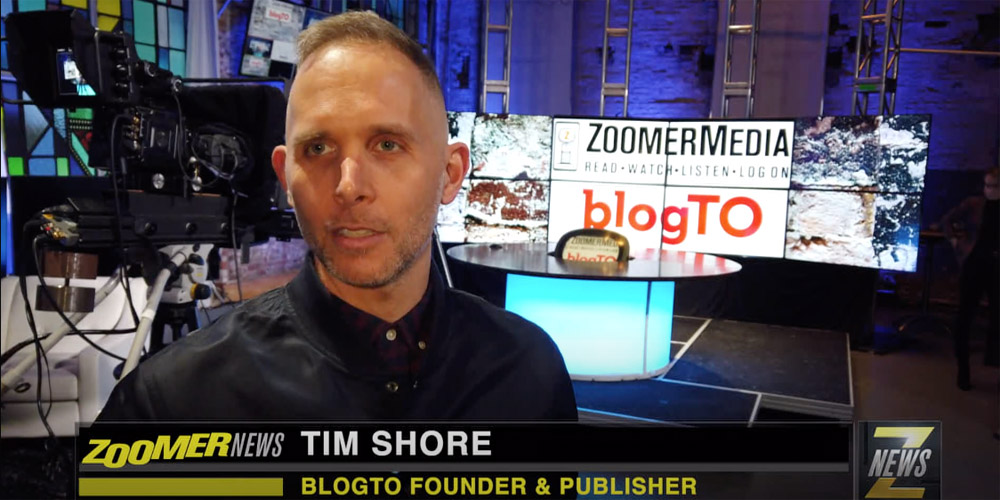 Tim Shore rejects the suggestion that blogTO engages in “clickbait.”

In a 2020 Reddit AMA, the outlet’s founder cited a definition once proffered by The New York Times, which limits the term to headlines that misrepresent an article’s contents. However, Shore said, headlines “shouldn’t give the entire contents of the article away so people feel they can just skim headlines and not actually read anything.”

Hence some of the those currently found on blogTO’s homepage: “Toronto cafe known for pretty brunch permanently closing“; “Toronto just got weird-looking coffee cups and people are already complaining“; and “A sinkhole that looks like a portal to Hell just opened up in downtown Toronto.”

In January, Shore sold the site to Moses Znaimer’s ZoomerMedia for $15 million.

On this week’s CANADALAND, Shore sits down with host Jesse Brown to explain the lucrative business of click-chasing, volume-based web publishing:

Jesse Brown: How the hell is your company worth $15 million? Like, what is the annual revenue of blogTO?

Tim Shore: So I mean, I can’t get into financials, obviously, because ZoomerMedia is a public company, so I’m not at liberty to really speak about that anymore. What I can tell you is that, prior to acquisition — at least I hope I can say this — blogTO was a profitable company, growing in terms of revenue as well as audience, year over year.

Brown: Tell me how you make money.

Shore: So the biggest misconception — and there’s a lot of them about blogTO — is that the content is paid for. If you go to the website, none of the content is paid for. It’s all editorial. People somehow assume that if we write about a local business, a restaurant, whatever, that they’ve paid us for that. That is not the case. Certainly, if we were to do anything that is sponsored — and we do a lot of sponsored stuff on social media — it’s all marked and clearly flagged as sponsored content.

Shore: Well, they’re not always great, but they’re gettin’ something.

Brown: Advertisers have never liked like hard news: death and misery and social issues. That’s why newspapers had travel sections, food sections, automotive sections. It was a safe place for advertising. When I look at blogTO and dozens of sites — you’re part of an industry that’s popped up — the general tone is happy and like a celebration of Toronto. And I think that that’s a very advertiser-friendly format.

Shore: But you have to also appreciate that content that is either strongly positive, or possibly the opposite, is more algorithm-friendly. So you’re gonna be seeing more of that in your social feeds.

Brown: It’s not just what advertisers want, it’s what people respond to.

Shore: It’s what people respond to.

Brown: You’re trying to entice people to click on the headline with the exact combination of words that is gonna get the most clicks that accurately reflects what they’re gonna get on the other end of that click.

Brown: And you’re pretty damn precise about it. Do you do A/B testing?

Shore: We do a lot of testing. We are very analytically driven. Analytics really drives a lot of our editorial decisions, unfortunately, as well as the way that we package content.

Brown: Why is it unfortunate?

Shore: Well, because I think there’s stories that we haven’t figured out a way to get readers to engage with, that we don’t pursue because the analytics are really poor.

Brown: What kind of stories are those?

Shore: I mean, like writing about local theatre productions, for example. We’d love to do more of that. People don’t read it.

Brown: It seems to me that the story of blogTO is one where you were locked in this dead-heat competition with Torontoist, and then you kind of pulled ahead. And it feels to me like they went, “Let’s really focus on civic journalism.” And that’s how they fucked themselves.

Shore: I don’t know if that’s how they effed themselves, but yeah, we had a different content strategy than Torontoist. I think the notion of local journalism, when people talk about local media, they make the mistake of always referring to civic journalism, city hall, political discussions. That is a very small fraction of what people living in a city are interested in. And in fact, a lot of people are not interested in that. They want to know what’s happening in their neighbourhood. They want to know what that weird thing is, you know, that someone is building down the street. They want to know where to eat and what events to go to. There’s a huge range of content that people living in a city care about. And the idea that it all revolves around city hall is totally, you know, a mistruth.

Brown: Is this just a volume business of, like, the more traffic, the more money?

Shore: We try to monetize the audience. The eyeballs. So it is a game where you got to build traffic. Last year, we delivered 350 million pageviews. That’s about 30 million a month. And so we’re trying to monetize each of those pages. Regardless of what the CPMs are [i.e., the ad rates, measured as a cost per 1,000 impressions], it’s all about volume. The more impressions you can deliver, the more revenue you’re gonna be generating.

Brown: What would be a good CPM for blogTO content?

Brown: So for every 1,000 people who see something, the advertiser is gonna pay you $16. I used to blog for Maclean’s, and we would do a little happy dance if a post hit 10,000 views. How many people does a really good post on blogTO hit?

Shore: Our top-performing posts on a weekly basis will be in the hundreds of thousands.

Shore: Every week. Yeah. Those will be our top posts. And I would say, internally, anything less than 20,000 is generally considered not a success.

Brown: This is like a long-term science experiment, inquiring into “What do people want to read about?” There’s actually an answer to that question. And since you started the site in 2004, you’ve been essentially refining and refining…

Brown: You know what Toronto wants to read about.

Shore: And so, you know, if people are wondering why we’re still writing about Drake, stop reading the Drake articles. We’re writing about him because every time we write about him, it generally does well.

Brown: Have you ever created content knowing that you’re lining up a certain sponsor?

Shore: Local publications have figured out by now that there are certain topics that advertisers like to be around. And a lot of them are seasonal. You know, when summer comes along, there’s a whole advertising base that wants to be around patio-related content or road trips that you can go on.

But I want to make sure that your audience understands the difference between selling an advertising package to an advertiser on, let’s say, real estate content, versus something that would be considered branded editorial or paid content. Over the years, we have gotten a massive influx of demand for that kind of content that we just flatly rejected. In many cases, those advertisers just went to one of our competitors and bought it from them, because they sell it. So about a couple months ago, we tested the waters with doing a small selection of these, mostly for cannabis advertisers.

Brown: I always figured, and I think a lot of people figure, that the ads on the website are how you make your money. Is that true?

Shore: We do make money from the website. But in fact, it’s not our main revenue source. It was, back in the day. But, you know, media has evolved, blogTO has evolved, and our audience has evolved.

Shore: These days, if you’re not following blogTO on social media and seeing all the original content that we’re creating across various social media platforms, you’re really not seeing the whole story. I know people like to focus a lot on the articles that we create, but we’ve got a social media and video team that is out in the city every day, creating original content for Instagram and TikTok. We’re active on Twitter. We’re about to launch two new shows on Snap. We’re obviously on Facebook. There’s a lot we’re doing on social media that people need to pay attention to.

Brown: How do those ads work?

Shore: The interesting thing about social media is that the platforms were largely developed with sponsored placements baked in, and therefore the audience that is using those social platforms is used to seeing these sponsored posts. And as a user, if you’re scrolling through your Instagram feed, you’ll see photos and videos clearly marked as sponsored. So we have a very large following on many social media platforms. We’ve been able to monetize that successfully through ongoing sponsored posts for various brands and advertisers.

Shore: We’re really looking forward to the relationship. I mean, the thing with Moses is he’s such an iconic figure in the Canadian media landscape [having co-founded Citytv, MuchMusic, etc.], and he’s so passionate about local journalism and local media, which is why we feel that this is such a great fit.

Brown: And he made you a millionaire.

Shore: Well, you know, it’s… it’s interesting, you know… it’s actually, I would say… hopefully… What am I trying to say here?

Brown: I don’t know. You should just say “Thanks.”

Shore: Yeah. Thanks, Moses. I mean, it’s tricky to figure out these days what a site or brand like blogTO might be worth: whether they underpaid, overpaid, whether both parties got good value. If we do what we’re planning on doing and we continue to grow the brand, then it should be worth a lot more one day — in which case, 15 million is gonna seem like a pretty cheap price.

Screencap of Shore at the ZoomerPlex from ZoomerMedia’s own ZNews coverage of its acquisition of blogTO.