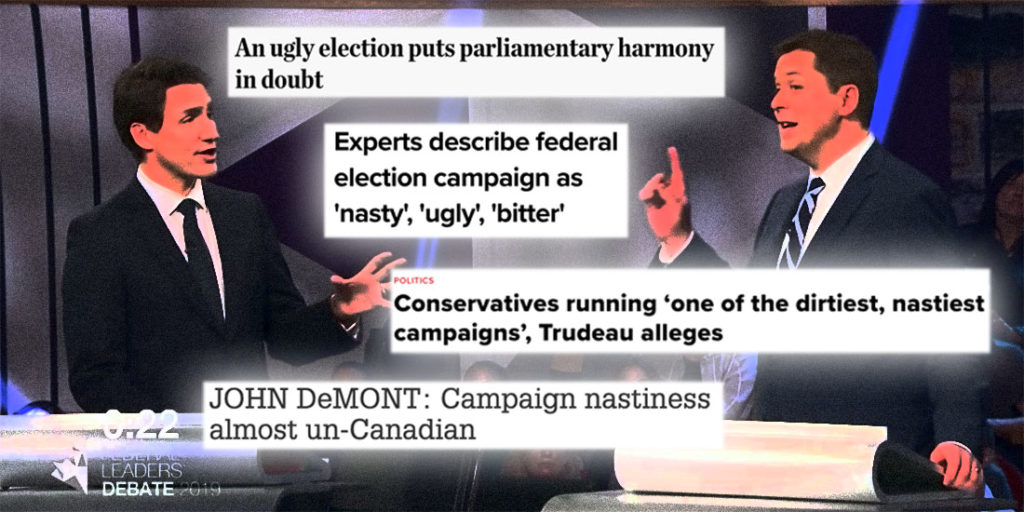 What We Deserve To Know About People In Power

“Nasty.” Listening to politicians and journalists, you’d believe that’s the one word that summarized the election.

Lisa Raitt lamented in early October that “most of the media reporting has to do with personal matters,” in response to a question from CBC’s Carol Off about why the campaign had been so “nasty.” The following week, Prime Minister Justin Trudeau blamed the Conservatives for “one of the dirtiest, nastiest campaigns” ever seen in Canada.

Canadian media followed in step, from the local to the national. The Hill Times decried the election’s “downright nasty, dirty tone.” So did academics and “experts.” International media took up the cry. Verdict rendered: the election was “nasty,” “dirty,” “ugly” — insert your negative adjective here.

But calling the campaign the nastiest ever is laughable. Yes, social media, especially in an election, can be a sewage pit of toxicity for politicians and journalists. (It’s particularly bad for women in either job; just ask Liberal MP Catherine McKenna and the CBC’s Rosemary Barton.) Yet to characterize this campaign as especially nasty requires glossing over a number of un-nasty things that happened and ignoring Canada’s long history of much worse elections.

Frankly, given Quebec’s racist Bill 21, a surprise blackface reveal, and a new far-right party, it’s surprising the election was as civil as it was. Three days before the writ dropped, a Toronto Sun editorial implored readers not to harass McKenna and Liberal adviser Gerald Butts. When Conservative supporters began a chant of “Lock him up” (in reference to Trudeau) at an Ontario rally, an embarrassed leader Andrew Scheer tried to steer them toward “Vote him out.” Campaign advertising was remarkably restrained, as Scott Reid, former director of communications for Paul Martin, noted with frustration on The Herle Burly podcast; he thought the Liberal Party should have released more bare-knuckled attack ads.

This is not to excuse the parties’ objectionable tactics. The Conservatives stoked disinformation about a non-existent Trudeau affair. They also ran Chinese-language ads alleging the Liberals intended to legalize hard drugs. (A particularly vivid ad with the image of a hand using a razor blade to divide lines of cocaine was taken down by Facebook for violating its advertising policies.) In turn, the Liberals ran their own Chinese-language campaign alleging the Conservatives would keep “assault weapons” (a term with no legal definition in Canada) on the streets. Maxime Bernier, for some reason allowed to participate in official leaders’ debates, used his opening remarks to call the other leaders “globalists,” which can be an antisemitic slur.

This was all very unpleasant, but none of it was nearly bad enough to make it Canada’s nastiest campaign, as Jonathan Gatehouse ably fact-checked. Canada’s history is filled with campaigns that were just as dirty and dirtier. In 2006, the Liberal Party insinuated Stephen Harper would enact martial law. In 1993, the Conservatives mocked Jean Chrétien’s partial facial paralysis in their “Think Twice” ads. In 1945, the Conservatives ran ads with antisemitic caricatures of the national secretary of the Co-operative Commonwealth Federation, a predecessor to the NDP, far outstripping even Bernier’s anti-immigration advertising. In 1917, during the First World War, Robert Borden’s Unionist government basically accused Liberal leader Wilfrid Laurier of being an agent of the German Kaiser.

So if we’ve been through worse before, why did everyone think this election was so “nasty”?

Politicians’ and journalists’ over-reliance on social media as a true reflection of public opinion plays a part; there’s no question social media magnifies negativity and makes abuse easier. And Trudeau was, undoubtedly, at the centre of some truly appalling disinformation about a non-existent affair, though this was hardly the “fake news” deluge so many feared in the lead-up to the election.

But there’s a uniquely Canadian dynamic that contributes to pearl-clutching about a supposedly “nasty” political discourse. Canadian media has a long history of maintaining a code of silence around politicians’ personal lives. As Andrew Cohen wrote in 2014, “In Canada, journalists hear lots about politicians — drinking, philandering, marital discord, sexual orientation. They report almost nothing (though Rob Ford might disagree).”

When I worked as a page in the House of Commons in 2006, I couldn’t believe what I learned. Numerous Conservative cabinet ministers were gay, another had impregnated a much younger staffer, that MP had dated a page — it went on and on and on. Everything I heard was common knowledge within Ottawa’s political and media circles and unknown to the general public.

The reasons for Canadian media’s omerta are disputed. Canadians’ distaste for tabloid-style celebrity news, strong journalism ethics, and journalists’ and sources’ “cozy” relationships are all cited as reasons for the media’s discretion.

But whatever the reasons, Canadian politicians are accustomed to a media culture in which their personal lives are mostly considered off-limits, unlike in the U.S. or the U.K. And while it’s nice that we don’t have the Canadian equivalent of a TMZ, it’s not so nice that TMZ ends up scooping Canadian media on arguably newsworthy stories.

But the code of silence is starting to crack. Social media has allowed conversations without gatekeeping, for better and for worse. Changing social and political norms have shifted perceptions of what we need to know about people in power. Podcasts have pioneered a new form where the usual journalism norms around style and subjects don’t necessarily apply. These forces are starting to come together in notable ways; sleeper-election-hit podcast The Herle Burly drops tidbits on what working with and for party leaders is like, while Canadaland’s COMMONS deems the personal lives of Canada’s rich and powerful to be directly relevant to Canada’s politics.

Not all journalists — or politicians — have kept up with these new attitudes, and still believe anything from a politician’s so-called “personal life” should be considered out of bounds. Anything else is rude, and as we can all agree, in a country where apologizing is an Olympic sport, there is no greater shame than to be anything less than polite.

Given Canadian politicians aren’t used to questions about their personal lives, it’s possible they can’t tell the difference between unwarranted personal attacks and justifiable reporting on their personal actions

Witness columnist John DeMont’s Chronicle Herald column titled “Campaign nastiness almost un-Canadian,” in which he writes, “It’s all about personality, from the damning stuff like Justin Trudeau’s love of painting his face and Andrew Scheer’s fudged work history, to the trivial matters like Elizabeth May’s disposable coffee cup. The tone everywhere is bitter, the language rancorous. Where, you ask yourself, is the civility that used to characterize politics in this country?”

Unpacking that DeMont passage would take its own article, but I’ll limit myself to stating the obvious: calling attention to Trudeau’s blackface does not mean Canadian politics has become bitter or uncivil. Nor does reporting on Scheer’s creative representation of his work history. Why wouldn’t a journalist want to report on these issues and let voters decide what is relevant to how they cast their vote?

(Okay, I couldn’t limit myself to that. Why doesn’t DeMont use the word “blackface”? Calling it a “love of painting his face” suggests Trudeau used to dress up as a clown, or paint butterflies on his cheeks at block parties. FFS.)

Andrew Coyne has argued that “no … neat separation is possible between private and public lives, either in principle or in practice.” I imagine more Canadians would agree with that today than when he wrote those words in 2010. I don’t know if any more politicians would.

Given Canadian politicians aren’t used to questions about their personal lives, it’s possible they can’t tell the difference between unwarranted personal attacks and justifiable reporting on their personal actions. Sexist Twitter mobs attacking McKenna’s appearance is not the same as Trudeau facing backlash for blackface. One is nasty; the other is the cost of wearing blackface to a party and then running for office.

It’s notable that Jagmeet Singh, the most subject to disgusting, personal racist attacks during the campaign, didn’t complain about the election’s “nasty” tone. This could be for any number of reasons: a desire to stay above the fray, a fear of being branded a whiner, or just a disinterest in the discussion altogether. But it could also be that as a person of colour, Singh hasn’t been as insulated by the bubble of cozy gentility as other politicians, and so wasn’t as surprised to see it popped.

Was this election shockingly ugly, nasty, dirty? No. It would only be shocking to a politician who has never before had to face questions about their racist actions, dual citizenship, or habit of keeping company with white supremacists. Or a journalist who is used to declining to report on anything remotely personal about politicians. Or anyone who can’t recall any elections other than this one.

Sure, it had unpleasant moments. What election campaign doesn’t? But #elxn43’s nastiest moment — learning the prime minister’s history of blackface — had nothing to do with angry social media mobs, political smear tactics, or fake news. Bringing nasty actions to light doesn’t make a campaign nasty. It makes it informed.

Allison Jane Smith is a freelance writer (and not to be confused with the co-host of Canadaland’s Wag the Doug podcast). Find her on Twitter at @asmithb.