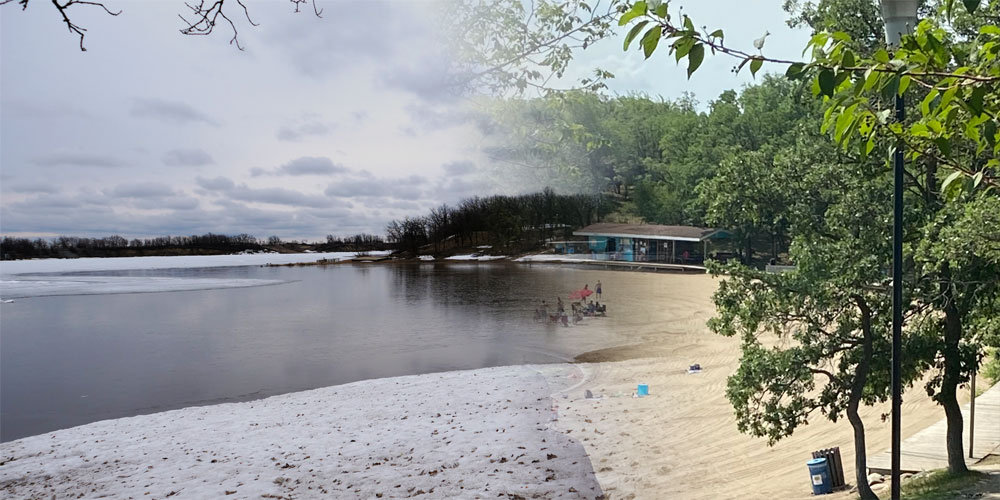 How climate change is screwing up water in the Prairies

A professor of geography and environmental studies at the University of Regina, Sauchyn is also the director of its Prairie Adaptation Research Collaborative (PARC), which studies the effects of climate change in Alberta, Saskatchewan, and Manitoba. And he says they have a term for such rapid oscillations from extreme dry to wet and back again: “whiplash.”

“This whiplash is the kind of condition that we expect in a warmer climate,” he says. “Now, I’m not saying that the drought of last summer and the flooding of the spring is caused by climate change — these are perfectly natural conditions. But there’s pretty good science to suggest that the severity of the drought and the severity of the flooding is, to some extent, increased as a result of a warmer climate.”

Canada has a vast and varied geography, and climate change affects different parts of it differently. But in the Prairies, water is the overriding theme — too much, not enough, and/or saturated with poop.

On this week’s CANADALAND, senior producer Sarah Lawrynuik dives into the messy confluence of prairie hydrology, climate change, and the inadequate infrastructure that makes the effects both worse:

From the show, here are a few examples of how water extremes manifest on the Prairies:

Last July, when huge swaths of the southern Prairies were in the midst of an extreme drought, the beach at Lake Minnewasta in Morden, Manitoba, was enormous — with enough space for hundreds of people and multiple volleyball courts.

But because the “lake” is actually a small, human-made reservoir, that meant the city’s main source of potable water was virtually gone. And it remained empty, until the snow started melting in only these past few weeks.

The past two or three weeks have also brought heavy snowstorms and torrential rains to the region, such that, in a matter of days, the main worry has shifted from drought to flooding.

The contents of floodwater can be as concerning as the quantity. Smaller towns and cities across the country rarely have wastewater treatment plants and rely instead on lagoons. When there’s too much precipitation in a place like Morden, the raw sewage in those lagoons overflows into nearby waterways.

Plans for a wastewater-treatment plant for Morden and two neighbouring communities have been in the works for more than a decade, but in the meantime, those population centres have kept growing, exacerbating the problem.

“All it took was for a cloudy day, and that killed the fish,” says Bill Buhay, a geography professor at the University of Winnipeg, who since 2009 has been monitoring the pollutants in Deadhorse Creek.

He’d seen that the sewage from Morden’s lagoon had been depleting the creek’s oxygen but not to a level that was critical — until his team went to take a sample on a day that happened to be overcast and found the whole top of the river “full of dead fish.” They quickly realized that, via photosynthesis, the creek’s plant life had been making just enough oxygen to keep the fish alive but hadn’t been able to do so on days without sunlight.

“All it took, really, was a really cloudy day for a couple of days, and the macrophytes weren’t making up that excess oxygen, and it killed everything,” he says. “That’s how vulnerable that situation is, right?”

In Winnipeg, which does have treatment plants, wastewater has also become a concern. Because when there’s a storm or high water flow in the spring — such as right now — those treatment plants can’t keep up.

For just such occasions, the Winnipeg Free Press has a Twitter bot:

That means that, in a three-day period during Winnipeg’s last storm, 60 million litres of raw sewage was released directly into the Red River, which flows into Lake Winnipeg.

More frequent and intense storms are one of the more well-understood impacts of a warming climate. But a city like Calgary also has to keep on top of the impacts that a changing climate is having on the mountains next door.

“With the very steep mountain catchment we have upstream, a single event can take us from drought to flood,” says Frank Frigo, the City of Calgary’s acting manager of watershed planning.

Winter snow acts as a natural storage mechanism, whose gradual melting regulates downstream flow, stretching out the supply of water through the summer. The models forecast that more precipitation will fall in the mountains in winter, creating a pair of parallel issues.

For one, more of that precipitation is likely to come in the form of rain, rather than as snow, meaning it won’t store as well. For another, the spring snow melt is coming earlier in the year, meaning that the heaviest flows might not reach Calgary and the surrounding farm areas in the months they need it most.

“Unfortunately, in our case, we haven’t seen a lot of evidence that these shifts mean an increase in drought risk and a decrease in flood — it’s more like an increase at both ends of the spectrum,” Frigo says.

Even with hydrological and climate models, it’s difficult to understand just how bad things could get in the Prairies.

“The worst-case scenario for the Prairie Provinces will be when a prolonged drought — a drought lasting years — reoccurs in a warmer climate,” PARC’s Sauchyn says. “And we haven’t had such a doll for quite a while.”

He points out that people tend to think of the drought of the 1930s as the worst it could get. But PARC maintains a Tree-Ring Lab, and after studying thousands of samples of wood dating back to the year 542, they’ve established a record of the region’s annual water levels covering the last millennium and a half.

“They show that there are droughts that last many, many years,” he says. “They just haven’t occurred since the Prairies were settled by Europeans. But they will reoccur.”

And when they do, he says, “They will occur in a climate that’s much warmer than in the past.”

He expects the consequence of these sustained, multiyear droughts to be “devastating.”