The high-profile trial of Mike Duffy, one of the country's best-known former journalists, has put a spotlight on two other political journalists. Exhibits filed this week in the trial of suspended Senator Duffy - the former broadcast journalist at CTV and CBC -- show that both Ezra Levant and Mark Bourrie accepted work contracts from Duffy the politician.
News Brief By David Akin
Share

The high-profile trial of Mike Duffy, one of the country’s best-known former journalists, has put a spotlight on two other political journalists.

Exhibits filed this week in the trial of suspended Senator Duffy – the former broadcast journalist at CTV and CBC — show that both Ezra Levant and Mark Bourrie accepted work contracts from Duffy the politician.

The Bourrie revelation is particularly ironic given that the Parliamentary Press Gallery journalist is the author of the recently published Kill the Messengers: Stephen Harper’s Assault On Your Right To Know, a polemic which argues in part that the Ottawa press gallery has a too-cozy relationship with the politicians its members cover.

The court record shows that, in 2010, Bourrie was issued a $500 cheque by one of Duffy’s contractors for what appeared to be “Web site analysis.”

Bourrie, in an e-mail exchange Tuesday, said he could not discuss the matter as he may be a potential witness. Neither Duffy’s lawyer nor Crown attorney Mark Holmes would say Wednesday whether or not Bourrie is on the witness list.

UPDATE: Mark Bourrie has posted an entry about his relationship with Mike Duffy on his personal blog.

Bourrie was referred to by name in court Tuesday by Duffy’s lawyer, Donald Bayne, as one of those who was paid by a Duffy contractor. Bourrie faces no charges.

But Christopher Waddell, a former Parliament Hill journalist who is an associate professor in the school of journalism at Carleton University, said it was “inappropriate”, nonetheless, for Bourrie to accept paid work from Duffy.

“You can’t as a journalist put yourself in a position where you undermine that relationship by giving your audience any reason to suspect your reporting and views on a issue are anything but your considered judgment of what is most important in a story for the audience to know based on your knowledge and experience,” Waddell said. “If you have a financial relationship with a politician that would lead your audience to question your impartiality when writing or reporting about that politician or perhaps his or her party or the institution they represent.”

The Parliamentary Press Gallery is a self-regulating corporation responsible for accrediting professional journalists for work on Parliament Hill. Gallery staff confirmed Wednesday that Bourrie was a Gallery member in 2010 at the time he took Duffy’s money and remains a member as of Wednesday, listed on the Gallery’s web site as a freelancer.

The court record put forward Monday by Duffy’s prosecutors also includes an e-mail exchange between Duffy and Bourrie from 2013 warning Bourrie and his wife that Senate investigators may seek information from the pair about work the two had done for him. Bourrie would not answer questions about that e-mail.

The e-mail also shows that Duffy was despondent that Parliamentary Press Gallery journalists — “so many Gallery kids” Duffy wrote in the e-mail– were not responding to his side of the then growing senate expense scandal story.

Presumably to cheer up what Bourrie has described as a friend of 20 years, Bourrie sent an e-mail to Duffy saying “Big hug, Duff.” 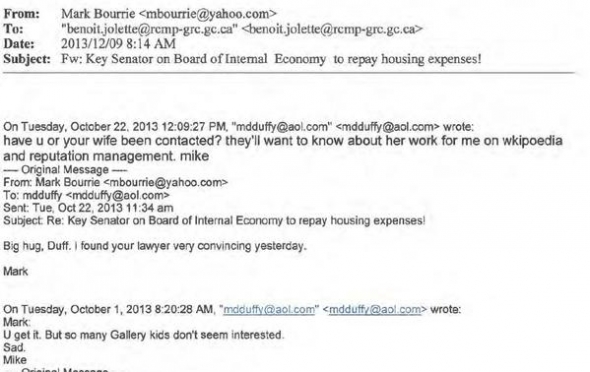 Levant, who has never been a member of the Parliamentary Press Gallery and has a long history of journalism and activism in support of conservative causes, accepted freelance speechwriting work from Duffy. The court record has two cheques to Levant for speeches totalling just over $4,000.

In an e-mail in the court record, Levant writes to Duffy that he was worried that the speech he wrote for the senator was not good enough. “I felt like I didn’t do a good job for you,” Levant wrote in a March 2011 message. 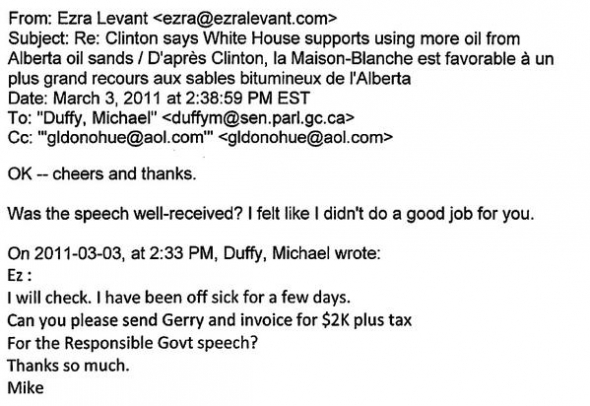 Levant, who is likely to be a witness in the Duffy trial, provided several details about his work for Duffy, including a follow-up e-mail to that March, 2011 message that is not yet part of the court record in which Duffy addresses Levant’s concerns: “It went very well, and I find it a comfort to have you as my consultant in these matters.”

Levant accepted those Duffy assignments after the closing of the Western Standard, where Levant was publisher. During that period in his life, Levant said he was engaged in a number of projects including freelance speechwriting, writing books, writing a newspaper column for Sun Media, and being a registered federal lobbyist.

Levant said that, on the direction of his supervisors at the now-defunct Sun News Network, he ceased all his work as a speechwriter and lobbyist before he became a prime-time television host.

“I can’t take more speechwriting jobs now that the show is starting, though — they’ve been clear about that,” Levant wrote to Duffy in a March 3, 2011 e-mail obtained by CANADALAND that has yet to be published and which could be part of the court record later in Duffy’s trial. 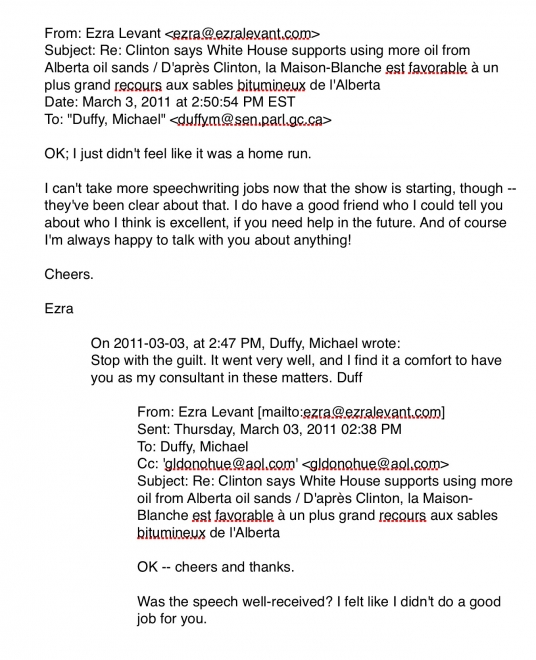 “I disclosed that letter to the RCMP. I sent them every single document and e-mail I had in relation to my dealings with Duffy — 35 documents,” Levant said in a separate e-mail Tuesday.
David Akin is a member of the Parliamentary Press Gallery and has been for over a decade. He is a former national bureau chief for Sun Media and a former colleague of both Mark Bourrie and Ezra Levant. His contact information, disclosure statement, and biography is at www.davidakin.com
Editor’s note: Though Mark Bourrie declined to comment prior to publication, after this story was published he said he recused himself from writing about Mike Duffy or the Senate. In fact, according to the index of Bourrie’s book Kill the Messengers, which was released in 2015, Duffy is mentioned six times.
Share
Sign up for our newsletter
Latest Stories