On October 30, 2014 Vice Canada and Rogers Communications announced a $100-million, three-year partnership. On November 17, 2014 Vice Canada published an article by freelancer Carly Lewis, “Inside the CBC’s Sexual Harassment Problems.” It was pitched and commissioned as a piece about incidents of sexism and harassment throughout Canadian media, and originally contained examples of alleged sexism at Rogers publishing and CTV. But by the time it was published, it dealt only with problems at the CBC.
News Brief By Jane Lytvynenko
Share

DISCLOSURE: The author of this article has written for Vice Canada. Twice. She has no professional conflict with any of the people mentioned in this piece.

On October 30, 2014 Vice Canada and Rogers Communications announced a $100-million, three-year partnership. On November 17, 2014 Vice Canada published an article by freelancer Carly Lewis, “Inside the CBC’s Sexual Harassment Problems.” It was pitched and commissioned as a piece about incidents of sexism and harassment throughout Canadian media, and originally contained examples of alleged sexism at Rogers publishing and CTV. But by the time it was published, it dealt only with problems at the CBC.

.@kevinjn this piece was supposed to be about cdn media, not just CBC. top editor removed vice-affiliated references https://t.co/d0V4nP4fko

The Rogers deal is a lucrative one for Vice, funding a brand new Toronto-based production studio to create shows for VICELAND, the upcoming 24-hour cable channel. It has also allowed Vice to expand its Canadian news presence, an effort resulting in high-profile town hall interviews with Thomas Mulcair and Justin Trudeau during the federal election. These events were sponsored by Fido, the Rogers-owned cellphone brand aimed at young customers. The Daily Vice — a rundown of top news and stories of the day — is also a Fido feature and was originally available only to Fido subscribers.

In an interview with CANADALAND, Vice Canada’s head of content Patrick McGuire was asked about the impact Rogers has on Vice’s content.

“Rogers has 100% zero bearing on the content,” added Michael Kronish, Vice’s executive vice president of TV. But as with any big ad purchase or investment, there can be internal anxiety about keeping the relationship positive. For instance, Carly Lewis’ article on sexual harassment in Canadian media.

In the wake of last year’s Jian Ghomeshi scandal, Lewis approached Vice with a story pitch about how sexism in Canadian media is an industry-wide problem, not one exclusive to the CBC. Vice bought the pitch and Lewis researched and filed the story, which contained examples of sexism at Rogers, CTV, and the CBC. She then received the following two emails, both from the same Vice employee: 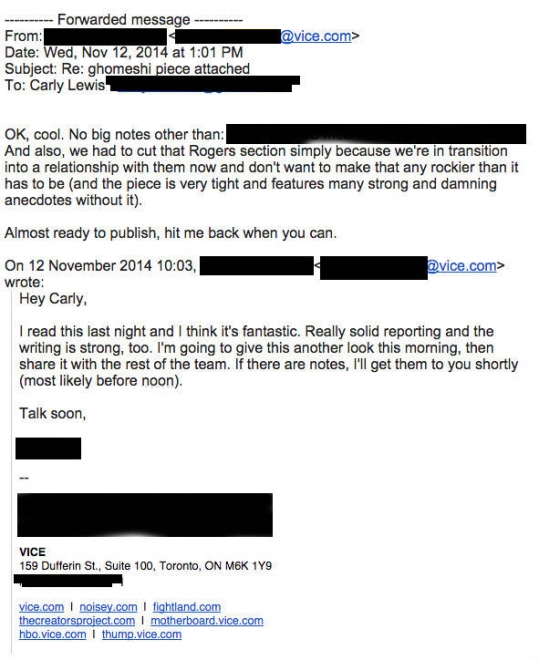 When confronted with the emails, Vice’s Patrick McGuire responded that the Vice employee who worked with Lewis on her piece was not her editor.

“This is not an opinion that was coming from me or any editor,” he said.

Both Lewis and the former Vice employee himself — who spoke to CANADALAND on condition of anonymity — said that though his official title was not “editor,” his job involved editorial duties like assigning and receiving stories, and working with writers on changes as an editor would. Lewis and the former employee both said he acted as the handling editor of her piece, Lewis provided email exchanges between the two as proof.

When McGuire learned that Lewis was told about the need to protect the Vice-Rogers relationship, he reprimanded his employee and took over editing the piece. He also removed the Rogers reference, along with a reference to an alleged incident at CTV. But he did so, he tells CANADALAND, for different reasons.

“I remember that story,” said McGuire. “It was a flimsy example. It was a story mainly about the CBC and she had one fairly unfounded example about Rogers. If it was any other company we would not have included it because it was not very well reported, so… That’s all it is.”

The former Vice employee who made the original decision to cut the Rogers reference questioned McGuire’s explanation.

“I wondered if the real reason was that Patrick didn’t want to rock the boat,” he told CANADALAND, adding that the first call to cut out non-CBC stories was based on his own assumption that the Rogers relationship had to be protected, not on any directive from Rogers or McGuire.

In subsequent emails, McGuire told Lewis the reporting on CTV and Rogers did not have enough sources to publish those allegations.

Lewis questions the reasoning. She told CANADALAND that all examples of media industry sexism and harassment in that article were based on only one source — the woman making each abuse allegation. That level of sourcing was enough for McGuire to publish examples of sexism pertaining to the CBC. McGuire told CANADALAND this is because there were several of them.

McGuire also told Lewis at the time that he was interested in further investigation of the Rogers and CTV allegations. But the former Vice employee said, “As far as I know there was not an ounce of further investigation.” Lewis confirmed she was never approached about a follow-up on those two stories despite continuing to write for Vice and eventually working for them briefly this February. She left Vice mere weeks later.

McGuire challenged Lewis’ credibility to CANADALAND, describing her as someone who has “obviously been scorned.”

This is not the first time that internal Vice emails have raised questions about the company’s editorial independence. In 2014, a former Vice editor posted an email from a senior editor who said that any story involving a large brand had to be “run up a flagpole.”