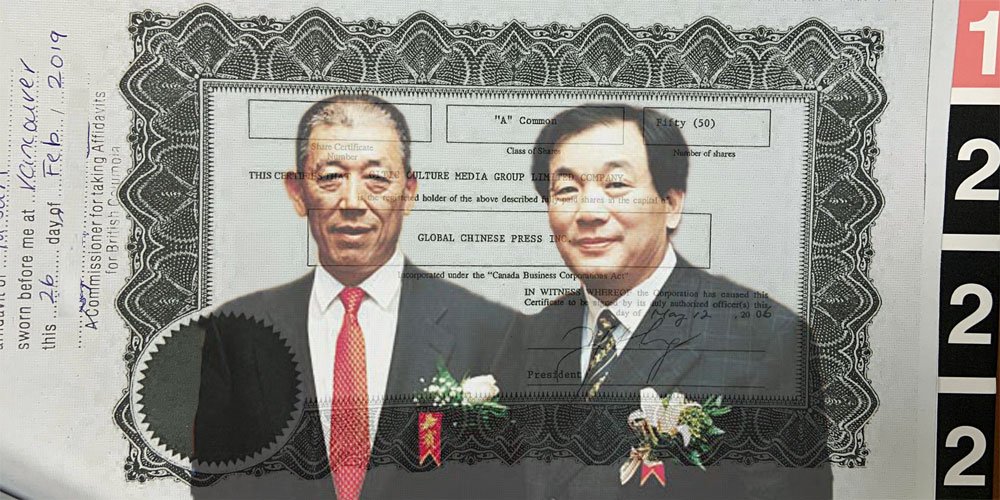 It’s rare, host Jesse Brown observes on this week’s CANADALAND, “to get to talk about Beijing meth houses in a story about Canadian media.”

Today’s episode is an interview with Ian Young, the Vancouver correspondent for Hong Kong’s South China Morning Post, about an investigation of his that largely went under the radar in this country when it was published last October. Using “crates of documents filed with the British Columbia Supreme Court,” Young pulled back the curtains on a long-running battle for control over a Vancouver-based newspaper, the Global Chinese Press — and how the media mogul who engineered its purchase by a Chinese state-owned company met an unexpected and untimely end.

“At the end of the day,” Young says, “there was this very, very prominent figure who wound up dead in a Chinese prison and has basically been erased from the record. It’s very hard to find anything about Li Bolun.”

But it all went HORRIBLY wrong. Li claimed the shares for himself & tried to immigrate to Vancouver. And if there's one biz partner you don't want to piss off, it's the CCP. Li was jailed for financial fraud in 2010. Then arrested again in 2015, supposedly in a Beijing METH HOUSE

Here’s the start of Brown’s interview with Young, somewhat edited and condensed, to give you a taste:

Who was Li Bolun?

Li Bolun was an amazing character, but you won’t read about him much. And if you Google him, you won’t find much about him, either. Li Bolun was the president of the entertainment arm of Citic, the Chinese government’s premier investment company. Now, this is a corporate behemoth. It has more than a trillion U.S. dollars in assets; Citic is a huge deal. And as the head of the entertainment arm of Citic, Li Bolun was also a huge deal. He first shot into the mainland Chinese spotlight back in 1996, when he was a sporting and entertainment impresario. He brought soccer star Maradona and the Argentine superteam, Boca Juniors, to China. At the time, this was the biggest sporting event in Chinese history, and that made a huge impact. And from there on, he was brought onto the board of Citic.

I’ve found out some amazing things about Mr. Li, who met a very untimely demise in 2016. And that’s all brought about and seen in court documents here in Vancouver that relate to a battle over a Canadian newspaper.

You write that he essentially pitched the idea of Citic even having a media and entertainment arm. That it was sort of his endeavour.

That’s right. This is way back in 2000. He got in sweet with Wang Jun, one of the most powerful figures in China at the time. Wang was the chairman of Citic and Poly Group, which is the corporate entity linked to the People’s Liberation Army. And Citic Culture, which is this entertainment group, was born in 2001 because of that. Li was made a director of Citic, and basically he was being touted as the most powerful man in Chinese entertainment. He was likened in Chinese state media to Sumner Redstone, to Rupert Murdoch. He was an immensely powerful figure.

Why would the Chinese equivalent of Rupert Murdoch or Sumner Redstone have anything to do with a Chinese Canadian newspaper in Vancouver?

Well, this is where it gets interesting. What I found out was there’s this newspaper called Global Chinese Press. It’s quite a prominent publication in Chinese circles here. It’s distributed for free, but it’s seen in Chinese malls across the country. And to that extent, it’s very well written, it’s a quite influential newspaper. And what happened was that very, very quietly, Citic and Li Bolun bought control of Global Chinese Press. Now, that’s an amazingly controversial thing, that the Communist Party’s corporate entity bought a prominent newspaper here in Canada, and this had never before been reported.

What happened next, though, was quite dramatic: those shares — which were actually printed in the name of Citic — ended up in the hands of Li Bolun himself.

Li Bolun was subsequently arrested and convicted of fraud in China, in an apparently unrelated matter. He’d engaged in lengthy legal action in Canada to secure these shares. He’d immigrated to Canada on the back of this purchase of shares, but then he was arrested again in China — in a meth house, apparently. And he died in prison a year later, supposedly of some drug-related ailment.

You reported that a corporate arm of the Chinese government bought a controlling interest in a popular Chinese Canadian newspaper. So my mind went towards this being smoking-gun evidence that the Chinese government is very directly trying to propagandize in Canada. But when I read all the details of your story, I actually began to doubt that premise.

There are strong reasons to look a lot more closely at this purchase, because Li Bolun’s lawyers and his widow, who has gone on to inherit these shares, have maintained all along that Li Bolun and now his widow are the legitimate owner of these shares. And it needs to be said very clearly that Canadian courts, so far, have repeatedly concluded that that is the case.

But at the same time, the widow’s lawyers have acknowledged that Li Bolun was acting on behalf of Citic when he originally entered this deal to purchase these shares. And Citic itself doesn’t appear to want anything to do with this legal action. It is not laying claim to these shares. It does not now want anything to do with this newspaper. And the lawsuits that have emerged are actually between Li Bolun’s widow, who now controls Global Chinese Press, and the previous owners — the founder, who said she thought she was going into business with Citic and, it turns out, appears to have gone into business with Li Bolun, unbeknownst to her, she says.

Listen to this week’s CANADALAND, “That Time China Bought A Vancouver Newspaper.”

Top image — consisting of Citic Culture’s certificate of shares in Global Chinese Press Inc. and a photo of Li Bolun (right) with Wang Jun — from pictures tweeted by Young.