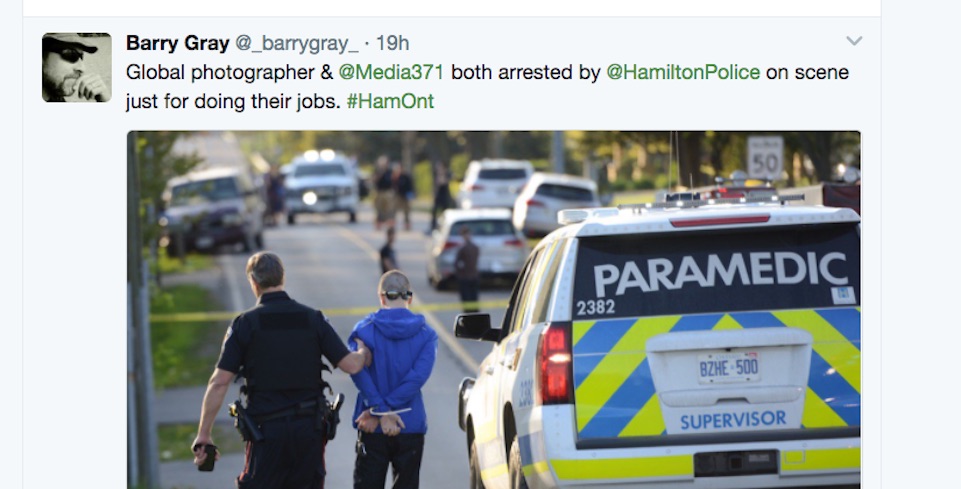 Both were tackled by police, say eyewitnesses
News Brief By Jaren Kerr
Share

On May 16, two photojournalists were arrested at the scene of a fatal car crash in Waterdown, Ontario, where a 10-year-old girl was struck and killed.

Jeremy Cohn of Global News, and David Ritchie, a freelancer, were detained by Hamilton police. Ritchie has been charged with resisting and obstructing police, while reports say Cohn was released without charge after about an hour and a half.

A video posted to Twitter by film technician Clint Guitard shows Cohn being handcuffed. Eyewitness reports say that police used excessive force, and that both journalists were tackled to the ground. Canadian Journalists for Free Expression (CJFE) describes the use of force as “extreme.”

“I just walked out of the gas station and saw the cop tackle the guy,” Guitard tells us in a message. “I thought the guy was a suspect, so I started filming. I had no idea what was going on.”

Barry Gray, a photojournalist at the Hamilton Spectator, witnessed the arrests and says he “heard [a] commotion and looked up to see [Cohn] being wrestled to ground and arrested.”

And things are getting tense here. @Media371 and this Global photographer both arrested by @HamiltonPolice. #HamOnt pic.twitter.com/uBqrK3H00m

Gray, who knows Ritchie personally, calls him a “respectful pro, well thought of by police and first responders.”

“I was shocked it happened from Hamilton cops,” says Gray. “Media has an okay relationship with them.”

Global photographer & @Media371 both arrested by @HamiltonPolice on scene just for doing their jobs. #HamOnt pic.twitter.com/9pE2Y7mShY

According to CJFE’s bulletin, “accounts indicate that the journalists did not cross a police line at the scene before they were detained.”

Rishma Govani, a spokesperson for Global News, says in an email, “We take the safety and security of all our employees very seriously and are investigating into the incident that occurred yesterday. We have yet to hear back from the police department.”

In a statement released Wednesday afternoon, Hamilton police chief Eric Girt said that he takes “the arrest of any member of the media seriously. As a result, I am reviewing this incident in the context of what transpired yesterday.”

CJFE’s statement says they are “deeply concerned” and call for “an immediate public inquiry into the circumstances which lead to the forceful detention and arrest of members of the media.”

Thanks for the support, I have great relationships with many first responders. This was an isolated issue and I will be seeking resolution.

Update (5/18/2017, 11:30 a.m.): Freelance photojournalist Andrew Collins witnessed the incident and tells CANADALAND in a series of messages that while standing on private property outside of the police lines, “I was grabbed by the officer, pushed back, and advised that I was lucky he didn’t have any more handcuffs or I would have been arrested, too.”

He also states that neither Ritchie nor Cohn crossed police lines. Asked what they were doing prior to their arrests, he says they were “just standing with their cameras.”