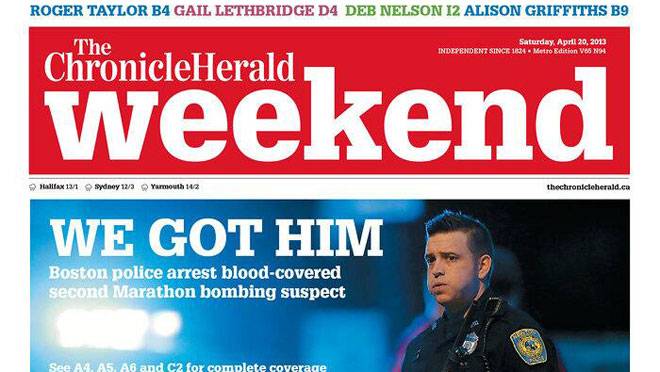 “I had to take the job:” Young Journalists Threatened by Newspaper Union for Scab Work

In the face of a lockout, the Chronicle Herald has been looking for recent journalism school graduates to fill the positions of their workers. The union has threatened to expose those freelancers.
By Jane Lytvynenko
Share

In the face of a lockout, the Chronicle Herald has been looking for recent journalism school graduates to fill the positions of their workers. The union has threatened to expose those freelancers.

Labour negotiations between the Herald and the Halifax Typographical Union broke down after two days. Ingrid Bulmer, the union’s chapter president, said the paper was not interested in negotiating with HTU, leading to a potential lockout. Currently the two sides are in the two-week cooling off period. If they don’t consolidate, the lockout will begin on January 23 at 12:01 a.m. According to HTU’s release, management wants to cut salaries and hours, reduce benefits, change the way layoffs work, and remove the gender parity clause from the contract.

During the lockout, the Herald is looking to hire scabs — temporary workers who will replace the ones locked out. In an email obtained by the CBC, Herald’s vice president of news Brian Ward offered freelancers work. Recent graduates of The University of King’s College journalism school have also been approached, CANADALAND has confirmed. The Herald  has not responded to our requests for comment.

The union has promised to reveal the names of anyone they know is scabbing.

Kelly Toughill, director of King’s school of journalism, said there’s a lot to consider for young people who have been approached for this temporary work. Crossing the picket line could mean contempt from future co-workers, but it could also be an opportunity to earn some experience for anyone early in their career.

One recent grad who signed a freelance contract with the Herald before the dispute began said he “did not fully understand what I was getting myself into,” but “really had no other option.”

In an email, he said he’s held temporary journalism jobs in the city since graduating last May “with a ton of debt” but hasn’t been able to find employment since the fall. “What was I supposed to do? I had to take the job. It was my last resort,” he wrote.

He fully realized the situation he was in after the union threatened to release the workers’ identities online.

@sack_vegas I’m making a list and checking it twice and will make it public, along with how to find them on Reddit, LinkedIn, etc.

Another former Herald employee, who is early in his career, has also been asked whether he’d be interested in more work in the event of the lockout. His first instinct was to accept it, but he then took a step back and rethought the offer. Both have had friends who were approached.

“It’s difficult, for young and up and coming journalists the hardest part is giving up and opportunity to do meaningful work and have something in your portfolio,” he said. “You’re always taught that in this shrinking, competitive industry you have to take every opportunity you can.”

Bulmer confirmed the union would expose those working as scabs at the Herald. “It’s a bit of a shaming idea,” she said. “If you decide that you’re going to take jobs that would normally be ours while we’re locked out by the company we want to let other journalists and other companies know that this is the type of work you’re willing to do.”

“It sounds like it’s cruel and mean and vindictive but in the long run it’s helping them.”

She hopes this would make young people reconsider the type of work they’re willing to do. “It sounds like it’s cruel and mean and vindictive but in the long run it’s helping them,” she said. The union has also written a post to discourage anyone thinking of scabbing.

Meanwhile, the union has been reaching out to the community for support, encouraging readers to suspend their subscriptions and launching a Twitter campaign #iwrotethis in response to the Herald removing all bylines from a paper when HTU called for a byline strike. Bulmer said they will also be reaching out to advertising partners once the lockout is confirmed on January 23.

When journalists put their bylines on their work, it means something. Today, the CH took our names away #canlab pic.twitter.com/wiMcfAtQaa