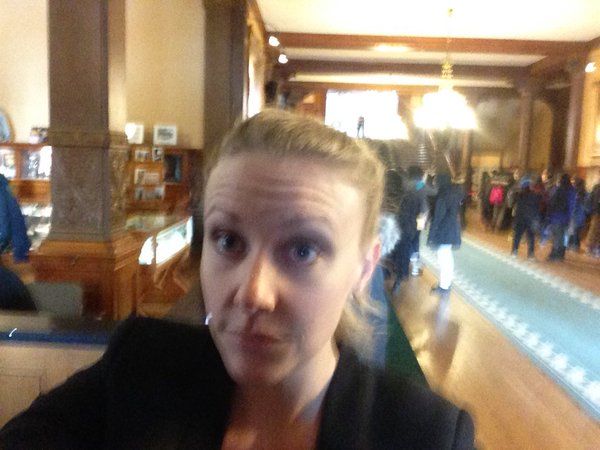 After appearing on CANADALAND to speak about being denied access to the Ontario legislature, reporter Allison Smith was once again not allowed to watch Question Period — until she tweeted about being barred from the legislature.
By Jane Lytvynenko
Share

UPDATE: Last week, a day after CANADALAND’s episode featuring Allison Smith, the Queen’s Park press gallery announced a meeting to be held on Thursday. During that meeting they allowed Smith to have guest pass access to the legislature. They will have another meeting in the near future to determine whether Smith should receive membership. We will update the story once the decision is reached.

After appearing on CANADALAND to speak about being denied access to the Ontario legislature, independent reporter Allison Smith was once again not allowed to watch Question Period — until she tweeted about being barred from the legislature.

Update. I am in. Security card was told no. Then they sent an escort to take me the gallery and gave me guest pass. Okay.

Guard was definitely told “No” by gallery clerk, bc he repeated it into the phone three times, in confusion.

Smith runs a specialized website called Queen’s Park Today which covers the Ontario legislature. She has been denied access by the Queen’s Park press gallery for four years.

“Their reasoning for not allowing me membership has varied, from ‘you do not qualify,’ to saying that online-only publications do not qualify, to saying they are updating their constitution so I can’t see it, to the fact that I operate sole-proprietorship,” she told CANADALAND in an email.

“They also said they consider me a ‘blogger,’ not a journalist, which is completely inaccurate, and suggested I may have ties to lobby firms or other conflicts of interest (also completely untrue).”

After she got a radio show with CIUT, a University of Toronto community radio station, she was told she can access Question Period on Mondays using a guest pass. But today she once again faced difficulties getting into the legislature.

She said a security guard didn’t let her in because her name wasn’t on the list. “Generally the security just gives you a pass and you walk up to the gallery to get a second sticker on you pass,” she said. “But my name must have been flagged today.”

After she tweeted about not being allowed in, a cameraman from City TV who said he was sent by Randy Rath, the press gallery president, told her she could come in. It’s unclear why she was once again denied access, she said she received no explanation.

We asked Rath why Smith couldn’t get in this morning but he said, “it is not correct to say the Press Gallery denied her access today.”

“As president, I had told the Gallery clerk last week that she was approved to have access for a day pass today and from your description of what happened, obviously the Gallery clerk misunderstood,” he said in an email. “The confusion was sorted out quickly, and not because she tweeted about it. She got access to the Legislature.”

Since being granted access for her CIUT show Smith already attended Question Period two other times. We asked Rath what was different this time around and will update this article when we hear back.

Smith appeared on today’s CANADALAND show and spoke about the difficulties she and other online-only journalists face when it comes to accessing the Ontario legislature. You can listen to the full episode and read the statement from the press gallery here.