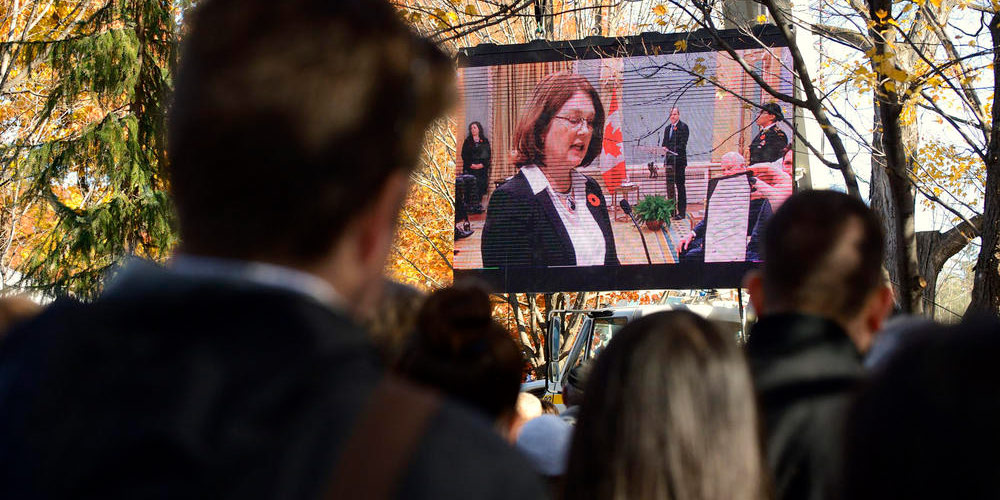 Jane Philpott: Parliament Is “The Most Dysfunctional Place I’ve Ever Worked In My Life”

Standing in front of Rideau Hall, on a crisp November day in 2015, freshly-elected Prime Minister Justin Trudeau made a big promise.

“Government by cabinet is back,” he told a throng of assembled reporters.

His recently unveiled cabinet was stacked with representation: from all of Canada’s regions, from immigrants and people of colour, from people with disabilities, from Indigenous people, and from women — “Because it’s 2015,” Trudeau remarked.

Nearly four years on, it’s hard to remember exactly what that sense of optimism felt like. And not even Jody Wilson-Raybould and Jane Philpott can point to where things went off the rails, exactly.

“The leadership style changed over time,” Philpott says, in a conversation with myself and Jen Gerson recorded for this week’s episode of OPPO, out Tuesday.

“There was a level of consciousness from some people around that table that there was going to be an election — and to ensure that what was done was done to hold on to power,” she says.

Over an hour last week, the two women offered some behind-the-scenes looks at major policy questions they confronted and painted a picture of a government increasingly more concerned with re-election than with the “evidence-based policy” it once promised.

However you feel about the two women — and there is a range of opinions — both have a unique perspective on government. Both were rookie parliamentarians when they were elected in 2015, and both were elevated to cabinet straight away: Philpott, to health; Wilson-Raybould, to justice. Philpott would go on to serve as minister for Indigenous Services and president of the Treasury Board. Wilson-Raybould would be demoted to Veterans Affairs in January.

It was earlier this year that things went off the rails.

News broke that the prime minister and his team had been pressuring Wilson-Raybould to cut a deal for Quebec engineering giant SNC-Lavalin, which was facing criminal prosecution for bribing the inner circle of Libyan dictator Muammar al-Qaddafi. First, she resigned from cabinet; Philpott followed not long after.

Since then, their political legacies have been intertwined. Both were fired from the Liberal caucus in April, and both recently announced they would be running as independents in the upcoming election.

Sitting down with OPPO in Ottawa, the two went through some of their big files over their time in government.

When she became health minister, Philpott was already facing a growing crisis. Scores were dying from a flood of extremely potent opioids. But when she took office, Ottawa wasn’t even tracking the number of overdoses and deaths.

The tracking finally began in 2016. Between then and September 2018, more than 10,000 Canadians died of accidental drug poisonings. Getting that number down was part of Philpott’s job.

“I feel like we were able to make really good progress,” she says.

Philpott made it easier for harm-reduction workers to open safe-consumption sites, expanded access to opioid-blocking drug naloxone, and set up a program to allow doctors to prescribe heroin to those suffering from addiction.

“I think it would be fair to say that the further you push, the more anxious staff get,” she says.

When it came to prescription heroin, she had to fight her own government to get it done. “That was surprisingly difficult to convince political staff that that had to happen — but I knew that it had to happen,” she says.

But, she says, “I had hoped to push things even further in an evidence-based way.”

Philpott visited Portugal and Switzerland, two countries which have experimented with drug decriminalization to measured success.

Yet Trudeau made it clear, in public, that drug decriminalization wasn’t going to happen (even though it’s a position that has been endorsed by his own party).

“Decriminalization is not popular when you poll it,” she says.

Over her time as minister of justice, Wilson-Raybould had some wins.

She instituted clear rules on prosecuting HIV non-disclosure and a directive on prosecuting Indigenous peoples, recognizing their over-representation in the justice system and the inter-generational harm that can have on Indigenous communities. And she helped usher in the legalization of cannabis and physician-assisted dying.

But, as we’ve covered on OPPO in the past, her tenure was less than stellar. Despite promising big things for criminal-justice reform, the big reform package she introduced amounted mostly to tinkering — including some policies that may actually worsen entrenched problems.

One of the biggest broken promises from the Liberals’ 2015 campaign was their pledge to review, and ultimately scrap, unnecessary mandatory-minimum sentences. They have done no such thing.

She wouldn’t go too far into the government deliberations that happened while she was justice minister (both women may be out of cabinet, but are still bound by cabinet confidence, which forbids them from revealing conversations that occured around the table). But the fact that the mandatory minimums are still on the books, despite her opposition, speaks for itself.

The boys in short pants

Both women are running, as independents, with a pledge to do politics differently. And they’re in a select group of people who know how politics actually work. And it’s not always pretty.

“I experienced a centralization of power wherein individuals who were unelected…were having a great deal to do with the direction of policy decisions and choices that the government made,” Wilson-Raybould says.

Philpott argues that there needs to be an honest exchange between people in power and voters. One that doesn’t let polling dictate policy.

“Politicians, I think, need to figure out how to have those conversations with Canadians in a way that will allow us to introduce evidence-based policy in a politically palatable way,” she says.

Part of the problem, Philpott contends, is that Ottawa is, in a very real way, broken.

“The Parliamentary system…is the most dysfunctional place I’ve ever worked in my life,” she says. In her typical understated way, Philpott notes there is “significant room for improvement.”

She acknowledges there’s “skepticism” that she and Wilson-Raybould can really affect change, but she adds that, if they can get re-elected, it could usher in a new level of cooperation amongst independently-minded MPs of all political stripes. “Until we challenge the system…it’ll never get better.”

Thinking back to the promise Trudeau made on that fall day in 2015 — to build a government which “looks like Canada” — Wilson-Raybould laughs.

“Be careful what you ask for, because you might actually get it.”