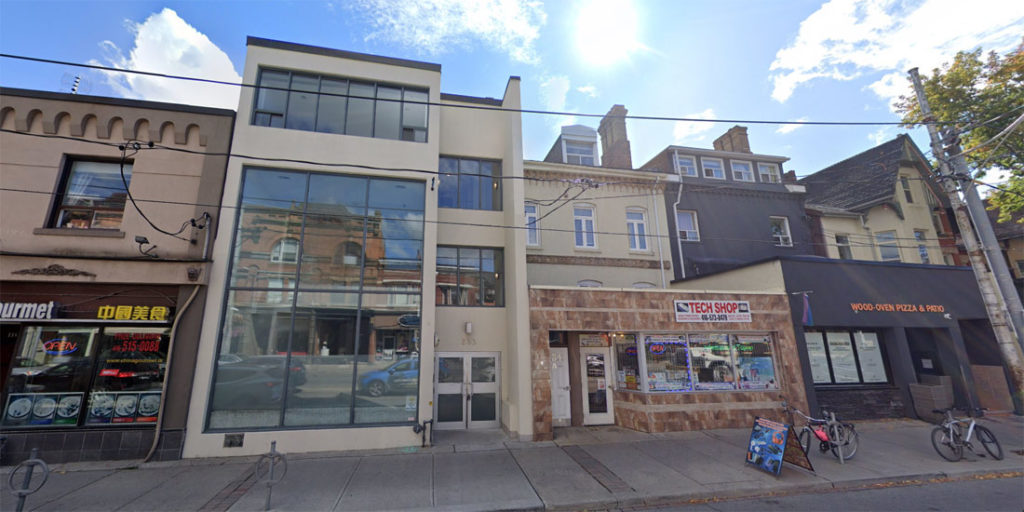 The City of Toronto is expected to spend up to almost $10 million over 15 years to lease and renovate a property owned by the parents of Craig and Marc Kielburger, the co-founders of the WE organization. Despite speculation by residents of Toronto’s Cabbagetown neighbourhood, who have pointed to Mayor John Tory’s long relationship with the Kielburgers, a spokesperson for the mayor says he had no involvement in the decision, which was made by City staff without Council approval.

The property is currently assessed at just under $2.3 million for tax purposes.

According to WE Charity, a real estate agent hired by the City approached Fred and Theresa Kielburger regarding 233 Carlton Street, which they own through a numbered company. A representative then handled the deal on the Kielburgers’ behalf.

The building is set to become the new home of the Adelaide Resource Centre for Women, a 24-hour drop-in centre, expected to open in the third quarter of 2021.

It previously served as WE’s first headquarters and has been part of a sometimes significant real estate portfolio owned by Fred and Theresa Kielburger. An August 2018 search showed seven Toronto residential properties registered in the names of one or both, estimated to be worth approximately $24 million at the time, according to listing.ca. A search late last week showed just three properties in their names, estimated at a quarter of that.

“These now-retired teachers have been able to generously support the good works of their sons because of their history of buying, self-renovating, and selling 18 properties in the Toronto area over a 40-year period of rising Toronto property prices,” WE told Canadaland last year.

WE says that Marc Kielburger, representing his parents, also spoke to City staff about the 12,754-square-foot building, “seeking greater clarification on the proposed use of the site.”

Reached by phone, Brenda Ha tells Canadaland that she works with the Kielburger parents “on occasion” through her personal and corporate concierge company, Check Box Services, and confirmed her role in negotiating the lease agreement for 233 Carlton.

The City tells Canadaland that the majority of the negotiations were conducted with Ha but that there were “one or two direct telephone conversations with Marc Kielburger prior to signing the lease to discuss the type of program that would be offered and the community engagement process that we would follow.”

The agreement was completed last summer before neighbourhood residents could be consulted. Kristyn Wong-Tam, the councillor for the area, says she was also not informed in advance. Because the total value of the contract was less than $10 million, the decision was delegated to City staff and did not go to City Council for approval [pdf].

The City said they and Marc Kielburger “also discussed the installation of an elevator and if that would be done by the landlord or leaseholder.” The City will take on all the renovations, and plans to spend $3.7 million on them before the centre opens.

That is separate from the nearly $6.1 million the City plans to spend for the 10-year lease, if it also exercises an optional five-year extension. The lease started on January 1. The City said renovations have not started yet.

“It’s not far off market [rate], although I would want to be able to look at the inside to… see if it’s a high-quality space,” says Matt Wood, a real estate agent based in Cabbagetown, who specializes in commercial properties. “It’s pretty middle-of-the-road of the Toronto lease market.”

While Ontario’s Municipal Property Assessment Corporation values 233 Carlton at just $2.26 million for tax purposes, the City says the property was not offered being offered for sale.

Mayor John Tory, whose office says he was not involved in the lease, has a relationship with the WE co-founders. He was a witness at Craig Kielburger’s 2016 wedding, and called Marc a “friend” in a 2014 tweet, a few weeks before he was elected mayor. Tory has also appeared at WE Day and on stage when WE opened its Global Learning Centre, a standout building in Toronto’s Corktown neighbourhood that WE opened in 2017.

Thrilled to sign the register at the wedding of Leysa Cerswell and Craig Kielburger in Scarborough. pic.twitter.com/l4xHoPe29R

Both WE and the Mayor’s Office say that Tory has never been paid to attend or speak at a WE event.

Asked about the nature of Tory’s relationship with Marc and Craig, Don Peat, the mayor’s communications director, says he “was a volunteer in support of the Kielburgers’ charitable endeavours” before being elected.

“That involvement ceased when he became Mayor, though he has, as Mayor, attended a number of events directly or indirectly related to those charitable and community endeavours,” Peat says.

WE says the brothers and the mayor have “a relationship built on their mutual commitment to public service, but there is no social or otherwise personal relationship.”

However, in 2008, Tory took a trip to Kenya with his extended family, and spent several days with Marc and Craig there. Peat says Tory “fully paid the costs” for the trip. At the time, he was leader of the Progressive Conservative Party of Ontario.

He was accompanied in Kenya by his sister, Jennifer Tory. A major supporter of WE, she called the experience in Kenya her favourite vacation in a 2012 video for RBC, where she is the bank’s chief administrative officer.

“Not only did we do a safari, but we spent four days with Marc and Craig Kielburger and Free The Children,” Jennifer said in the video, referring to WE Charity by its name at the time.

Jennifer Tory has served as national co-chair of WE Day, and a now-deleted page on WE’s website listed her as a “Founding Family Champion.” RBC is one of WE Charity’s “Founding Partners,” but on Thursday The Globe and Mail reported that the bank is now reconsidering its relationship.

The Mayor’s Office says John Tory has no relationship with Fred or Theresa Kielburger, was not involved in the decision to select 233 Carlton, and “had no knowledge about current or previous ownership of the building.”

The building is owned by 1622774 Ontario Ltd., which lists Fred and Theresa Kielburger as administrators.

The same numbered company also owned a property at 329 Queen Street East before selling it to the ME to WE Foundation for $2.6 million in early 2019. WE told the National Post that Fred and Theresa Kielburger had purchased the property at the foundation’s request — because the “organization did not have sufficient funds at the time” — and then sold it to the foundation for the same price they had paid.

From June 2004 to September 2018, the parents allowed WE Charity to use 233 Carlton rent-free. According to a signed statement WE provided from a Sotheby’s realtor last year, that represented an in-kind value of nearly $4.7 million. WE told Canadaland in 2019 that the ME to WE social enterprise, WE Charity’s for-profit sister company, covered the property taxes and mortgage interest in the form of an annual donation each August, for $97,200.

Next door sits 231 Carlton, currently owned by 7619804 Canada Corporation, also registered to Fred and Theresa Kielburger. From August 2010 to September 2018, WE used the building rent-free, which WE says represented $702,900 in foregone rental income. The building is now occupied, in part, by a store that repairs laptops and sells electronics.

WE says Fred and Theresa did not receive a tax receipt for either agreement.

WE told Canadaland in 2019 that “the net value of ME to WE real estate assets is zero, as the value of all assets [is] 100% fully leveraged through low interest repayable loans to three generous outside individuals/groups who support the concept of social entrepreneurship and ME to WE.”

Victor Li, the CFO for WE Charity and ME to WE, assisted the Kielburger parents in setting up both numbered companies. His signature is on the articles of incorporation for 7619804 Canada Corporation, and he signed off on its most recent annual return.

Both companies “were established by Fred and Theresa Kielburger specifically to own, respectively, 233 Carlton St. and 231 Carlton St.,” Li said in a statement provided by WE in 2019.

“Because the properties were purchased solely to support WE Charity, I simply assisted in their incorporation.”

A few weeks before the City leased 233 Carlton, Council agreed to acquire a nearby building, 218 Carlton, for use as affordable housing. It was transferred to the City for $2 as part of a community-benefits arrangement with the developer of a condo tower more than a kilometre away on Charles Street. The property at 218 Carlton was previously used as an office by WE Charity, which had recently sold it to a numbered company set up by the developer for $2.75 million.