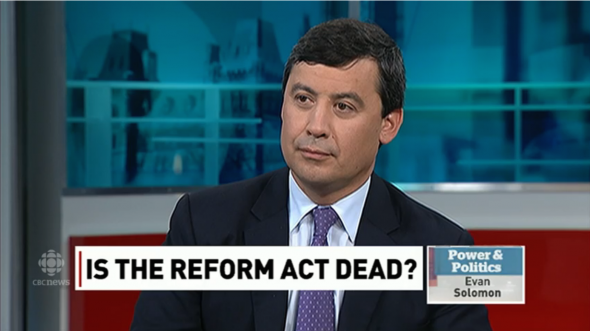 Michael Chong’s Reform Act is Easy to Hate. So Why Does the Media Love it?

How well are be being served by our political media if they can’t be bothered to get both sides of a story if that other side is coming from the Senate? It is a legitimate parliamentary body, even if they’re not elected, and it's not going away, so maybe it behoves us to actually give it proper coverage.
News Brief By Dale Smith
Share

Conservative MP Michael Chong’s Reform Act is a flawed piece of legislation with a tortured history that is nevertheless getting a free pass and a comforting hug from the political press.

First introduced at the end of 2013, it was watered down with amendments to the point of uselessness, but the vast majority of MPs ended up voting for it anyway because it sounds sufficiently feel-good – it has “reform” in the title after all, and the vast majority of the nation’s columnists think it’s swell because it’s an attempt to limit the powers of the prime minister. It also passed because it’s a political syllogism – something must be done, and this is something, therefore we must do this.

The problem, however, is that the way the bill is drafted, it will actually do more harm than good to our parliamentary institutions (as I’ve written elsewhere). Well, that and the entire premise of the bill is flawed: MPs don’t actually need to be more “empowered” as the bill purports to do (and would in fact do the opposite), as MPs have all the power they need already – they just lack the will and intestinal fortitude to exercise it.

With the bill now before the Senate, Chong began a media campaign to complain of foot-dragging. What has been neglected in coverage is that senators are aware of the problems of the bill and are reluctant to pass it. We have not seen any acknowledgement by either Chong or the media that it’s the Senate’s job to catch bad bills that the House of Commons passes and do something about it, whether that something is to amend it or kill it outright, as they have the constitutional power and obligation to do.

So what coverage have we seen? Mostly a one-sided take from Chong, assuring everyone that everything is fine in the bill, that Senators shouldn’t hold up something that just affects the House of Commons (he’s wrong – there is a provision in the bill that does affect senators that they are very concerned about), and his admonishment that because the Commons passed it overwhelmingly that they should just rubber-stamp it. There has been virtually no critical coverage of the bill, or hearing from the critics to it.

This one-sided coverage was most pronounced on the broadcast segments done by both Power & Politics and The West Block, where both shows had Chong on to air his grievances about the Senate, going so far as to threaten that there will be a “crisis of confidence” in the institution if they don’t pass his bill, but neither show could be bothered to have a senator on to respond to Chong, or to address their concerns. I confirmed this with fact with senators who have publicly spoken out against the bill, who said that no attempt was made to reach out to them.

The West Block did have Tom Clark read out a statement by “The Senate” (not specifying whether it was Senate Communications or the Leader of the Government in the Senate’s office – and yes, there is a difference) that the length of time was not unusual, and that they have no mechanism to prioritize a private member’s bill through the system. Chong rejected that out of hand, never mind that he’s completely wrong and that is the way the Senate rules work. In the write-up of the story on their website, they also cited wrong information about how many sitting days the Senate has left in which to consider the bill, linking to a calendar page without the knowledge that it’s a mere guideline and excludes committee sittings (where the bill still needs to go), or any kind of understanding that the Senate rises when their work is done, not on a set date. They routinely sit into July, long after MPs have gone home.

What concerns me, aside from the blatant one-sidedness, is that a media narrative has developed that the Senate is “illegitimate,” so it’s okay to use them as a punching bag even when they’re doing their job – finding flaws in bills and either amending or striking them down. It’s part of that awful dichotomy that we perpetuate, both lambasting the Senate for being a rubber stamp, while at the same time howling with outrage when they exert some modicum of independence – kind of like MPs who break ranks, as Chong’s bill is supposed to encourage (but actually won’t). How well are be being served by our political media if they can’t be bothered to get both sides of a story if that other side is coming from the Senate? It is a legitimate parliamentary body, even if they’re not elected, and it’s not going away, so maybe it behoves us to actually give it proper coverage.