Rogers publication Medical Journal recently recognized four medical doctors for their religious faith. Three of them were Christians with sterling accomplishments. One was a Muslim... and is the leader of Al Qaeda.
By Amina Jabbar
Share

UPDATE: The Medical Journal has apologized for the article in question, stating “we got this wrong.”

Editor’s Note: The following is an open letter written by Dr. Amina Jabbar to Rogers Digital Media and the editors of their publication, The Medical Post. It is written in response to this article in their current issue: 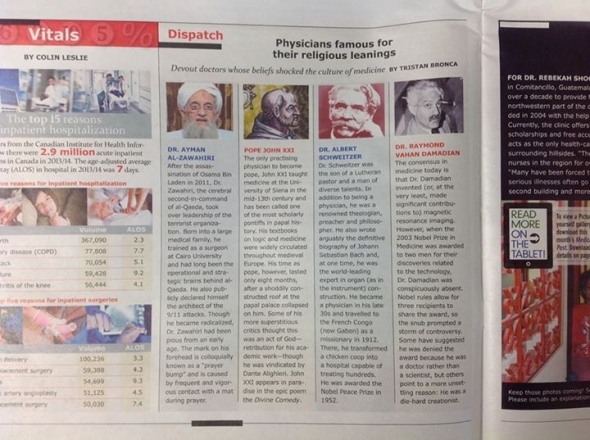 Dear Editors of the The Medical Post and its publisher, Rogers Digital Media:

I am deeply disappointed at the racism embedded within “Physicians Famous for their Religious Leanings,” an article published in the April 7, 2015 edition of the The Medical Post.

The article discusses the professional work of four physicians in the context of their faith. The article recognizes Pope John XXI, who was a practicing physician and teacher. Dr. Albert Schwitzer was an author of a biography on Sebastian Bach and a Nobel Peace Prize winner in 1952. Dr. Raymond Vahan Damadian was credited with contributions that led to the invention of the MRI.

The article also recognizes Ayman Al-Zawahiri, al-Qaeda leader and an architect of the 9/11 attacks, as a Muslim physician noted for his faith.

Among those named in the article, three of four physicians are Christian. Each of those three are noted for their contributions to humanity. Al-Zawahiri is the only one on the list who one who is identified as Muslim and is an undeniable criminal.

Accomplished Muslims physicians, past or present, are not difficult to identify. A Google search for “famous Muslim physicians” leads to long lists of them. Avicenna (980-1037) was known as the father of modern medicine. Mansur ibn Ilyas was a Persian physician born in the late 14th century and created the first coloured atlas of the human body.

If you want a modern day example, Sheikh Muszaphar Shukor is a 42 year old Malaysian orthopedic surgeon, space researcher, and astronaut. If you do not think he fits the article’s headline, “Physicians Famous for their Religious Leanings,” then you should watch this YouTube video of him praying in space.

Al-Zawahiri’s politics, tactics, or religious beliefs are not representative of Muslim physicians. By citing Al-Zawahiri and comparing him to positive, non-Muslim examples, the Medical Post implicitly suggests that there is something inherently wrong with being Muslim and providing medical care.

The framing of the article perpetuates stereotypes of Muslims as terrorists. The article is ultimately disrespectful and hurtful to Muslim physicians.