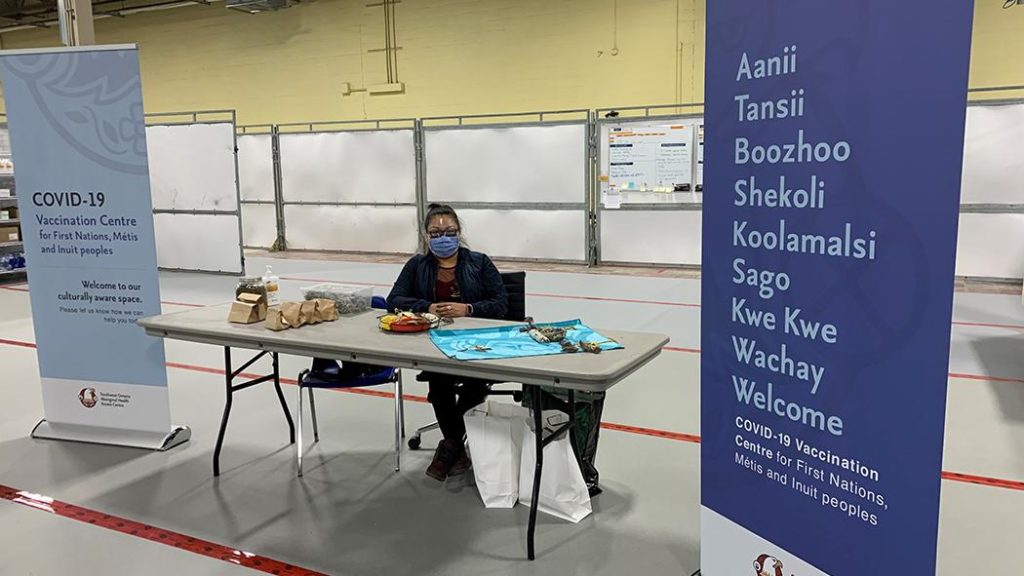 Some of the people responsible for booking vaccinations aren't recognizing the policies for racialized people.
News Brief By CANADALAND
Share

Ever since the Canadian government announced recommendations that adults from Indigenous and racialized communities should be given priority for a COVID-19 vaccination, accusations of reverse racism have filled comment sections and social media posts.

It’s no mere fringe belief. One of the most powerful people in Canada, Ontario premier Doug Ford, made very similar comments about Indigenous MPP Sol Mamakwa using his ethnicity to “jump the line.”

In fact, Mamakwa got vaccinated at the invitation of a host community and in accordance with the federal government’s advice that Indigenous adults should be prioritized for vaccination as soon as possible.

Now, racial minorities with vaccine priority are facing racism and other structural barriers to getting the jab.

Our new reporter, Cherise Seucharan, has been trying to find out exactly why these policies are needed, how they’re working out — and if the Canadian public is willing to back them.

In early April, right after British Columbia decided to grant Indigenous people 18 and older priority for vaccinations, BC MLA Bowinn Ma went public about racist, anti-Indigenous messages she’d received in reaction to the announcement. In a message posted to Facebook and Twitter, she said that in the worst cases, the comments “are extremely racist,” and in numbers “through the roof.”

The statement was followed by a piece by Moira Wyton in The Tyee, which detailed how Indigenous people were being refused vaccine appointments by health professionals, despite provincial orders saying they were eligible.

Breen Ouellette, a Vancouver-based Métis lawyer, also personally faced this backlash. He detailed his experiences getting a vaccine on his blog.

“I called the Vancouver Coastal Health vaccine registration line. Their website was indicating that Indigenous people 18 years of age and older were eligible, and the person who took my call politely but firmly tried to turn me away. She claimed that I was too young for the vaccine and she said that I had to be an Indigenous elder over sixty five years old to register. I suspected this might happen, sometimes things are not communicated very well, but also because of the way systemic racism works and can be reinforced by individual racism, sometimes people within the system will use their de facto authority to try to turn Indigenous people away from services that they are entitled to.”

After his blog post was published in The Georgia Straight, Ouellette started receiving messages from others who had faced similar barriers, and even harassment, just for trying to get vaccinated.

“It’s caused some people to come forward privately through social media and tell me that they encountered similar problems, being told that they’re not eligible, being turned away, or they’ve had family members who’ve been turned away…. And I am also aware of an individual who got the vaccine, and told people at work that they had received the vaccine, and then people at work started to ostracize this person for receiving priority, from coworkers to the person’s supervisor.”

Dr. Alika Lafontaine, an anesthesiologist and the president-elect nominee for the Canadian Medical Association, has long advocated for equity in health care. He’s the founder of Safespace, an app with which Indigenous people can report experiences of racism in the healthcare system.

He says that there has been marked backlash against vaccine policies in some provinces.

“Here in Alberta, you hear anecdotal reports, but it’s different than what’s happening in B.C. and Ontario, where there seems to be more of an organized resistance against Indigenous people receiving vaccination … I think there’s groups of individuals who are sharing and amplifying their messages on social media and are organizing protests. And I think that that’s more concerning than just the regular frustration that people have when it comes to accessing health care here in Canada.”

“So I think the first thing that needs to be understood is that in health care, resource distribution historically hasn’t been fair. If you look at the places that we’ve built hospitals, the places that we’ve provided access to primary health care, these are often urban centres or they’ve been in towns that aren’t on reserve or communities that are in remote parts of Canada. …. The second is that when you layer over the social determinants of health, the fact that there’s limited housing, that you often have multi-family, multigenerational groups within the same home, that layer is on top of greater inequities.

One of the big challenges, whenever you have limited supply within the healthcare system, is that priorities for one demographic group that really do need access to these vaccines for very well-researched, established, data-driven-type reasons can get overwhelmed by needs from other demographic groups. And we’re seeing this in Ontario right now, where the Indigenous communities that we’re told would be part of Phase One are now not vaccinated fully, especially within urban centres. But people are moving on to Phase Two and further down. And so, there’s a big risk that this is a ‘priority’ and then slowly that it could be overwhelmed by other priorities.”

Dr. Lafontaine also says that reports of vaccine hesitancy aren’t about marginalized communities misunderstanding the science, but about the harms they’ve experienced in the healthcare system.

The push to vaccinate Indigenous groups appears to be working. According to Dr. Tom Wong at Indigenous Services Canada, in First Nations communities, the number of COVID-19 cases is down 80 per cent since mid-January due to the uptake of vaccines. While there were more than 12,000 confirmed cases of COVID-19 in First Nations across the country in the first three months of this year, there have only been about 2,300 since March.

But there’s been a push from public health experts nationwide to further prioritize other minority communities.

Black and other racialized populations are on a priority list for Ontario’s Phase Two, but these have been limited to hotspot zones. And doctors and nurses in these zones are reporting huge demand with lineups lasting hours. In some cases, clinics have had to close due to not having enough vaccines.

There’s evidence that without a concerted effort to target racialized communities, the consequences will be dire.

Just a couple of weeks ago, Dr. Kali Barrett, a physician at UHN in Toronto, said in a statement, “every person I have cared for with COVID-19 is racialized.”

And Ontario-based nurse Birgit Umaigba posted this harrowing message she received from another nurse:

“Both had COVID-19 – a pregnant woman and her hubby. We lost them all, her twin babies and her husband.The only surviving son is now an orphan. Same stories, all racialized and from multigenerational homes. These experiences will haunt us forever.”