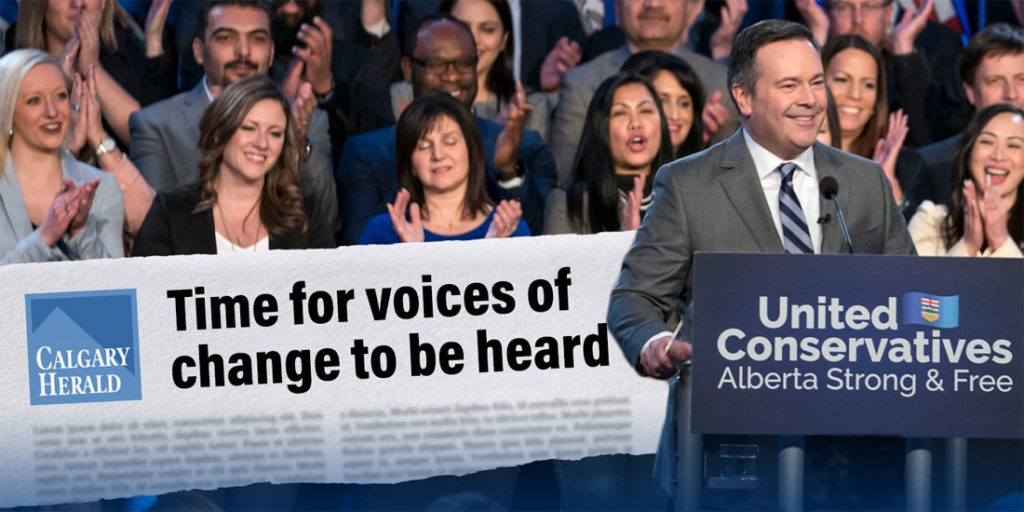 Postmedia Network Canada Inc., the country’s largest newspaper chain, has hired the campaign director of newly elected Alberta premier Jason Kenney to see if it can participate in a government-led, campaign-style “war room” to attack environmental groups and counter negative coverage of the province’s oil sector.

According to the Alberta Lobbyist Registry, Nick Koolsbergen registered to lobby the government on behalf of Postmedia Thursday. The listing says Koolsbergen will “discuss ways Postmedia could be involved in the government’s energy war room.” (The full registration is at bottom.)

“Postmedia has engaged [Koolsbergen’s newly established firm] Wellington Advocacy with respect to the commercial content area of the business and the previously announced Alberta government’s energy war room,” Phyllise Gelfand, the company’s vice president of communications, confirms in a statement.

In addition to producing journalism, Postmedia makes advertising content through its Content Works division, which specializes in placing branded or native ads within Postmedia publications.

That means the company could be angling to have government ads and content attacking environmental causes placed in its Alberta papers.

Postmedia publishes Alberta’s two prestige broadsheets, the Edmonton Journal and Calgary Herald, and publishes a tabloid Sun title in each city as well. It also owns over two dozen community papers in the province.

Two reporters at two different Postmedia publications in Alberta spoke to Canadaland after being approached with the lobbyist registration. They agreed to speak on the condition of anonymity, for fear of reprisal by their superiors.

Both say they have not experienced any change in the independence of the newsrooms at their publications, and that reporters remain free to pursue stories objectively and in accordance with general news-gathering practices.

However, both were upset that the parent company had taken this action, which they say impedes the perception of their editorial independence.

“We are still grinding, doing news and shoe-leather reporting,” says one. “But I can’t fault anyone for being suspect of the company’s motives after this, and that hurts our ability to do our jobs.”

Soon after his United Conservative Party won last month’s election, Kenney announced he would form the “war room” as part of a campaign promise to dedicate $30 million to counter “lies and myths” about the Alberta energy industry.

“Both the industry and governments of different partisan stripes have not been fast enough to respond to the incoming attacks,” he told reporters on April 18. “I want a unit in the government that will be on that the moment it is published, demanding a correction of the record and throwing a spotlight on what I think was, in that instance, irresponsible journalism.”

The oil-dependent Alberta economy has, in recent years, been impacted by volatile resource prices, and its landlocked geography has led to standoffs over pipeline construction that could bring its product more quickly to market. Alberta oil prices have remained depressed relative to international benchmarks, such as West Texas Intermediate.

Compounded by a controversial carbon tax implemented by the previous NDP government in 2017, the pipeline debate has engulfed multiple provinces, the federal government, First Nations groups, and dozens of industry and advocacy stakeholders.

At stake is a balance between maintaining Alberta jobs and quality of life — unemployment in the province has skyrocketed in recent years — and the fight to combat global climate change, which scientists agree is an urgent and unprecedented threat to life on Earth.

Kenney has frequently argued that environmental groups have spread misinformation about the energy sector, and alleged foreign funding is behind some Canadian environmental charities.

Meanwhile, Postmedia management has notable ties to political conservatives. Executive chair Paul Godfrey is a frequent donor to conservative politicians and past chair Rod Phillips is a cabinet minister in the Progressive Conservative government of Ontario Premier Doug Ford.

The company’s hiring of a lobbyist to potentially source work with an elected government is a seemingly unusual move for a company chiefly concerned with journalism, and could complicate the relationship between the federal government and journalism funding.

In Koolsbergen’s lobbyist registration, Postmedia disclosed that it received more than $1.5 million from the federal government’s Canadian Periodical Fund. Meanwhile, Kenney is one of several leaders of conservative parties in Canada that have actively campaigned against the environmental policies of Liberal Prime Minister Justin Trudeau.

Last year, Trudeau’s government unveiled plans for a five-year, $595 million package over five years to help Canada’s ailing media sector, of which Postmedia could be a major beneficiary. In other words, Trudeau’s federal government has, in effect, proposed to fund a company that could be in cahoots with a provincial one set on its defeat.

In addition to running Kenney’s successful election campaign last month, Koolsbergen served as his chief of staff from October 2017 to September 2018, during which time Kenney was the province’s opposition leader.

The author of this piece worked as a reporter for Postmedia’s Financial Post from 2016-17.