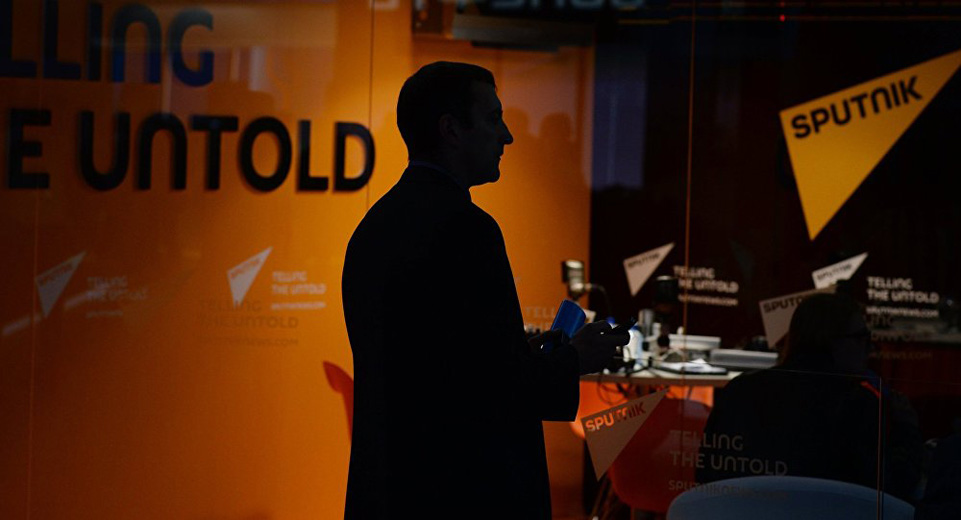 Journalism schools shouldn't tell students to throw their values out the window — especially when it comes to working for state-funded propaganda outlets.
Opinion By Olivia Blackmore
Share

Recently, an alumnus of my journalism school returned to speak about his career in the industry. Upon graduating in December 2016, he took a job at a reputable media outlet, but when he stood in front of my class nearly a year later, he was now working for Ruptly, a video news agency created and owned by RT (formerly known as Russia Today).

RT is Russia’s English-language, state-funded propaganda outlet, which pitches itself as Russia’s answer to biased Western media; it is notorious for cherry-picking facts and pushing its government’s agenda. Ruptly is not independent from RT. When another student and I asked questions about our guest speaker’s journalistic ethics, things got heated, and one of my teachers intervened.

She brought up other media outlets that are either state-funded or considered to have an extreme bias, saying that many have very good journalists working for them. (I don’t disagree.) She pointed out that our guest speaker had made it pretty far in the business for being so fresh out of school and later told me that it wasn’t our place to judge why someone took a particular job.

“What about Fox?” she asked the class. “If someone offered you guys a job at Fox, would you not take it because you don’t agree with them?”

A lot of the students shook their heads “no.”

Something about the examples used in this debate and the discussions that followed didn’t sit right with me. Since my first semester, we have been taught journalistic integrity, ethical reporting, critical thinking, and above all, to tell the truth. I felt let down because there was no further class discussion — before or after this incident — about how those principles should or shouldn’t relate to employment decisions. (I had one-on-one talks with my instructors afterwards.)

My instructors have always been honest with us about the industry: there are jobs, but not many, so take what you can get. I agree with this for the most part, but surely there’s a limit? And if so, what would it be?

I couldn’t let this go and turned to the internet to find answers, coming across several articles written by or about former RT and Sputnik News reporters and why they left.

One of the most recent was by Andrew Feinberg for Politico Magazine, who until May 2017 worked at Sputnik, an outlet that, like RT, is a state-funded Russian media agency that pushes a government agenda. His story was a cautionary tale.

For nearly a decade, Feinberg had worked as a journalist in Washington covering technology and cyber-security, and eventually landed a job at The Hill. Later, he would lose that job and get stuck in what he called “freelance hell.” That changed in December 2016, when Sputnik hired him as their White House correspondent.

I spoke with Feinberg and explained the debate in my class and some of the ethical questions it raised.

“When the choice arose between taking the job with Sputnik as their White House reporter and not eating or having a place to live, I took the job,” Feinberg says. “I was asked certain questions and given certain assurances that I would have the editorial independence that I was expecting anywhere else.”

He was told that the stories about Sputnik’s reputation had been overblown and decided to give it a fair chance. But knowing what he knows now, he would have never taken the job.

“The one advantage I had coming out of the Sputnik debacle was that I was already established as a reporter,” he says.

“If you took a job fresh out of school with a place like Sputnik or RT, and that’s your first job and you have no portfolio to begin with before that and all your clips…are from Sputnik or RT, you’re going to have a lot of problems.”

Part of what makes RT so appealing at first, especially for younger journalists, is the chance to cover bigger stories on a larger platform — an opportunity that can usually take years to obtain otherwise. The temptation is understandable.

“Your first job, your first two jobs, your first three jobs in journalism may suck. You may be covering city council meetings that go on until four in the morning, and making next to nothing,” Feinberg says.

By working these jobs in the beginning of your career, you’re learning not just your craft but what your ethical lines are, he says. If RT is your first job and you haven’t yet learned those lines, the results can be dangerous.

“All you’re getting back is praise from your bosses, because you’re just going along with the way they like things, you’re not really learning the job,” he says.

Feinberg mentions that any time he wrote about Crimea, he would have to include that 90 per cent of people voted in favour of becoming part of Russia. But what was always removed from his stories was the fact that the referendum was conducted at gunpoint, he says.

But he also draws a clear distinction between RT and Fox.

“Fox News is a private company run by Americans exercising their right to freedom of speech, with a nominal commitment to reporting the news,” Feinberg says.

So working for Fox and working for RT or Sputnik are, to him, not the same thing. “RT is paid for by the Russian government, and there are Americans working there in the U.S. and Germans in Germany, but the people in charge are Russian and the purpose is to influence public opinion, not to report the news.”

He made it clear that Fox is problematic, as it blurs lines between hard news and opinions. But he believes that as an outlet, RT is much more damaging. (He points out that there are also government-funded news outlets that are reputable, like the BBC or Agence France-Presse.)

Students have a responsibility to do their own research before taking a job. But I asked Feinberg what was really bugging me: what role does a journalism school have in all of this?

The medical and legal professions have strict ethical standards which aren’t that different from journalism, he says. If a lawyer or doctor breaks those rules, they can be shut out from their profession. But in journalism, you don’t need a license, to pass a special exam, or even have a journalism degree to be a reporter.

“But to the extent that there are journalism schools, I think that journalism schools have the same responsibility that law schools and medical schools do to educate journalism students in the ethics of their chosen profession but also to steer students away from ethically compromising situations,” he says.

Feinberg thinks that journalism schools should educate students on the difference between state-funded news agencies and state-sponsored propaganda, and how the latter crosses a line. And I agree.

I mention that some of my instructors say it’s not their place to decide where a student should or shouldn’t work.

“It’s their choice as to whether they educate people on what makes a reputable news outlet,” he says.

Olivia Blackmore is a French-Canadian Torontonian freelance journalist. Her work appears in the Ottawa Citizen/Sun, Canadian Living, and The Toronto Observer.

Top photo by Sputnik’s Konstantin Chalabov, taken at the 2016 opening of their branch in South Ossetia.