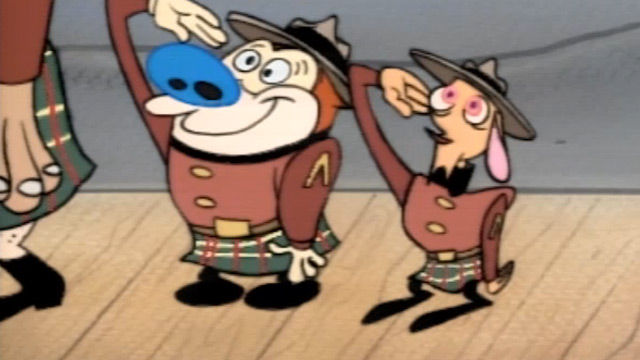 RCMP Bans Reporter due to his “Disrespectful Tone”

When police reporter John McFadden showed up to an RCMP press conference, he was told he was barred from the event because of unspecified "unprofessional and disrespectful conduct." That conduct? Reporting on the RCMP.
News Brief By Sean Craig
Share

Last Friday, the RCMP announced a big drug bust in Yellowknife. They held a news conference in the afternoon to present the haul of evidence they had obtained.

John McFadden, a reporter who covers the police for the local Yellowknifer paper, learned of the presser from an email blast sent to the press by RCMP Constable Elenore Sturko.

But when McFadden showed up to the RCMP station where the news conference was taking place, he was barred from going in.

In an e-mail he sent to his editor, obtained by CANADALAND, McFadden says that Constable Sturko told him he was being kept out because of his “unprofessional and disrespectful conduct.”  She then let CBC reporter Mitch Wiles in, McFadden writes, “before closing the locked door on me.” 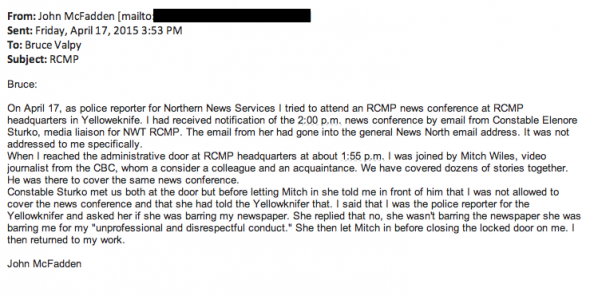 “I did witness John McFadden being denied entry to last Friday’s RCMP press conference,” confirmed Mitch Wiles. “I don’t want to speculate on why the RCMP denied McFadden access to the event. I have not seen John McFadden act inappropriately while covering a story.”

“I have never been disrespectful to the RCMP,” McFadden said, reached by e-mail.

In an email sent shortly before the conference, Constable Sturko tells Yellowknifer editor Bruce Valpy that due to McFadden’s “disrespectful tone”, “we do not see any benefit in speaking to him, or answering his inquiries.”

The two examples of a “disrespectful tone” given by the RCMP can be read here.

A close read of the correspondence between the reporter and the Mountie reveals little that might be considered disrespectful or rude on McFadden’s part, unless presenting a list of direct questions counts as bad manners.

It may be that McFadden’s journalism and not his etiquette is what got him banned.

The rift seems to have come after McFadden published a March 18 story on a firearms robbery. Sources at Northern News (Yellowknifer’s parent company) tell CANADALAND that the RCMP took issue with his opening line.

McFadden wrote: “There are serious concerns after a hand gun and a high-powered assault rifle, along with thousands of rounds of ammunition, were stolen from a residence in the Range Lake area on March 13.”

The RCMP, we are told, didn’t like the term “serious concerns,” and raised the issue with the reporter. McFadden apologizes to them for not saying exactly who had the serious concerns. Constable Sturko later seized on that apology, writing that McFadden, “by his own admission…does not report accurately on our organization.”

As you can read, McFadden makes a genuine effort to reach out to Constable Sturko, adding “I think we have a strong, mutual relationship. The last thing I want to do is jeopardize that in any way. I hope we are cool.”

As he is a police reporter in Yellowknife, it’s hard to imagine McFadden being able to do his job without access to the local RCMP.

CANADALAND obtained these e-mails as part of a chain that was forwarded to all Northern News Service editorial staff, along with a note from Managing Editor Bruce Valpy supporting his police reporter.

In his message to staff, Valpy writes: “It is clear John is being held responsible for what the RCMP considers to be negative reporting on their activities in Yellowknifer… We will continue to report the news and we hope NNSL editorial staff will ensure the RCMP understand they have no basis for their complaint against John and we will not tolerate any attempts to channel news away from him.”

“We stand by John’s reporting,” said Valpy, reached by phone at his office. “We stand by him as a journalist. We will keep sending him to press conferences because he is our police reporter. That is all I have to say about that.”

We asked Constable Elenore Sturko and the RCMP to explain her claim that McFadden admitted his reporting is inaccurate. We also asked why McFadden was barred from the press conference by the RCMP and if the RCMP could cite any reporting by McFadden or Northern News Service that is inaccurate. They did not reply to these questions.