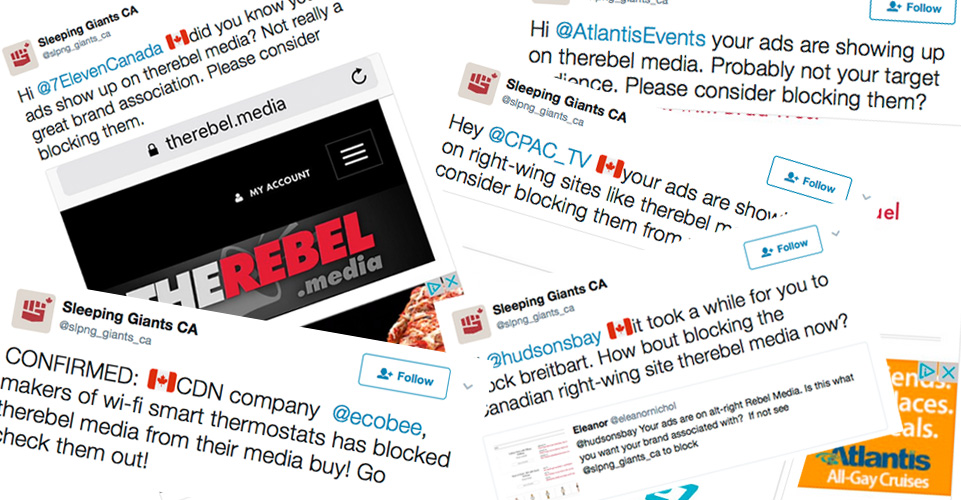 And Ezra Levant is not happy about it.
News Brief By Jaren Kerr
Share

A social media account that encourages advertisers to remove their ads from far-right hate site Breitbart is now going after its Canadian counterpart, The Rebel.

Sleeping Giants was created in November to strike at Breitbart’s advertising revenue. The group tweets at advertisers whose ads appear on Breitbart, warns them of the site’s bigotry, and provides instructions on how to blacklist it. Because digital ad-buying is largely performed by algorithms, advertisers are often unaware their ads appear on a given site.

The Canadian branch of Sleeping Giants has been tweeting since February but had also been focused on Breitbart. On May 18, it declared that it would target The Rebel.

BIG NEWS: @slpng_giants_ca ?? is now taking on TheRebel. VERY similar to Breitbart. Please follow and support this effort. We know we will. https://t.co/uXVyBoesx1

In tweets to advertisers, the account describes The Rebel as a “right-wing Canadian web site,” which, while accurate, does not fully capture the views of its contributors, who have called for a new Crusade to expel Muslims from the “Holy Land,” outlined what they “hate about the Jews,” and, most recently, said that British Muslims are “enemy combatants,” at least some of whom should be placed into camps.

In an email interview, Rebel founder Ezra Levant accused Sleeping Giants of being “disgraceful anti-Semites” on the grounds that they’re encouraging advertisers to boycott “a Jewish-owned, pro-Israel website.”

Asked to clarify whether he believes any criticism of, or agitation against, The Rebel is inherently anti-Semitic, he responded, “All I know…is that they’re borrowing Nazi brownshirt tactics from the 1930s to harm a Jewish-owned business in 2017.”

Shown some of Levant’s comments, Sleeping Giants’ U.S. parent tells CANADALAND in a message, “Look, we just tell brands where their ads have been showing up. They can do what they want, but we’re glad that most of them are making the decision to pull their ad money out of Breitbart. Ultimately, it’s a business decision. Hate speech and bigotry just isn’t a good look for most businesses.”

On Saturday, Levant shared with CANADALAND a screenshot “someone” had sent him that appeared to show Twitter providing an update to a user in Britain who’d complained about Sleeping Giants Canada: “Thanks again for letting us know. Our investigation found this account in violation of the Twitter Rules.”

A spokesperson for Twitter Canada declined to elaborate on the circumstances, stating, “We don’t comment on individual accounts.”

Sleeping Giants, however, explains that “someone made a fake Canada account last week, and we had it shut down.”

Indeed, there is an apparently pro-Rebel clone, @slpng_giants_ca, that unlike the real Sleeping Giants Canada, has a capital “I” in place of the lower-case “L” in its user name. Visiting the profile displays a warning from Twitter that the account has been “temporarily restricted” due to “some unusual activity.”

Sleeping Giants also encourages people to call out advertisers themselves, and it seems to be working. Their work helped to get over 2100 advertisers to blacklist Breitbart, and over 80 to pull out of Fox News’ now-cancelled The O’Reilly Factor. On Tuesday, a similar Twitter campaign by journalist Alex Kotch persuaded SoundCloud to boot the podcast of white nationalist Richard Spencer for violating its terms of use.

The Sleeping Giants movement is international, with active accounts for Brazil, France, New Zealand, Germany, and many other European countries.

With a report from Jonathan Goldsbie.