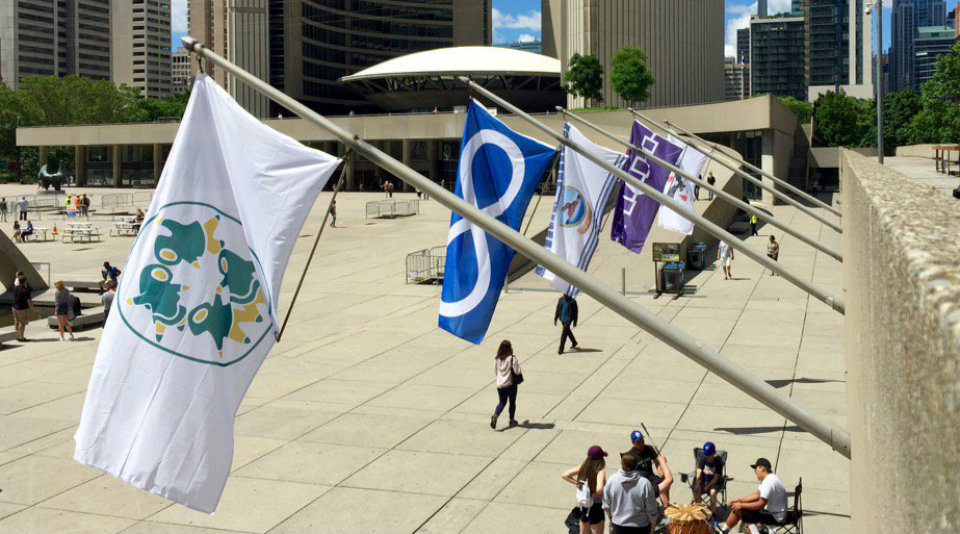 National Indigenous Peoples Day — renamed by PM Justin Trudeau at the last minute — is like every other day for me when I wake up, make a strong coffee, and read the news. I don’t wear regalia every June 21, but maybe I should — more people might notice me and pay more attention to Indigenous issues. In any case, I saw on that day that the Financial Post had published a piece by Frances Widdowson as part of its “Junk Science Week” series, under the title, “Treating aboriginal ‘traditional knowledge’ equal to science in environmental reviews can make things far worse.”

I cringed and then actually bothered to read on.

Widdowson wastes no time in demeaning Indigenous knowledge. Referring to two recent reports that stressed the importance of including traditional knowledge (TK) in environmental assessments, the Mount Royal University professor argues that this would be to the detriment of all of us because TK continues to go undefined and held up as equal to science, with potentially “serious environmental consequences.”

To satisfy Widdowson, and in response to the same complaint made in a book she wrote with her husband back in the day that was riddled with damaging myths and stereotypes about Indigenous peoples, I’ll Google it for her: the Native Women’s Association of Canada explains that definitions of TK are “diverse and often region-specific” [pdf], and cites a joint description from the Canadian Institutes of Health Research, the Natural Sciences and Engineering Research Council, and the Social Sciences and Humanities Research Council. They define TK as:

“The knowledge held by First Nations, Inuit, and Métis peoples, [and] the Aboriginal peoples of Canada… specific to place, usually transmitted orally, and rooted in the experience of multiple generations. It is determined by an Aboriginal community’s land, environment, region, culture, and language. Traditional knowledge is usually described by Aboriginal peoples as holistic, involving body, mind, feelings, and spirit.”

So, TK is the first-hand, lived experience of Indigenous peoples. Similar to eyewitness testimony, focus groups, case studies, etc., in that value is bestowed on what is observed and experienced. These methods are used across industries as means of collecting data. Charles Darwin, whom Widdowson referred to in her book when discussing the evolutionarily underdeveloped state of Indigenous peoples, used observational science. Science and analysis, especially when part of an environmental assessment, don’t happen in a vacuum: lived experience within said environment is essential to understanding it. Changes that happen in the ecology of any environment would be seen and experienced by the people who have lived there for generations. Yet Widdowson is stumped as to how Indigenous peoples could have “unique insights inaccessible to others” — and how, if they did, would society be able to evaluate such insights.

I suppose she could start by looking at scientific studies in which researchers and scientists did incorporate TK into their processes and found they gathered information they would not have obtained otherwise. For example, a study of the effects of the Alberta tar sands on fish — Kevin Timoney and Peter Lee’s “Does the Alberta Tar Sands Industry Pollute? The Scientific Evidence” — stated that scientific data and traditional knowledge together indicated that rates of fish abnormalities may have been higher than expected, increasing, and related to changes in water quality. The study also noted the importance of fish to Fort Chipewyan residents and that the mercury levels of the fish being eaten posed serious risks such as cancers, vascular diseases, and Type II diabetes.

Similarly, a study on the effects of resource extraction, hydroelectric development, and global climate change on fish in Canada’s Slave River found that by combining two knowledge systems, overall understanding of the presence and movement of several fish species was improved. By looking at the broader connectivity of regions, as well as extending the study beyond the recent past, the authors increased “the spatial and temporal range of system information.” Using TK and Western science, baseline data was captured, priority areas were identified, species under increased pressure were recognized, and the effects on neighbouring communities could be integrated.

It didn’t take long for me to find these successful studies in scholarly journals.

Widdowson goes on to write that TK can have “serious environmental consequences” in relation to the protection of species that Indigenous peoples have an “interest in harvesting.” She references polar bears — traditional food sources for the Inuit — and the melting of sea ice that forces bears to move further into inhabited areas where, she says, the Inuit assume the bear population is growing and kill them to profit in the trophy-hunting business. Widdowson fails to give a clear and responsible picture, which would include the effects of climate change on sea ice and the cultural and socio-economic value of polar bears to people in Nunavut.

Polar bears, like seals, have become warm and fuzzy symbols for non-Indigenous environmentalists and animal-rights activists who feel compelled to protect animals that are a source of food and income for Inuit peoples (as they have been for generations) in communities desperately short of jobs and money. For Widdowson to frame TK as harmful to animals — to use the Inuit’s own livelihood to demonize them — is sadly common and dangerous. Threatening Indigenous peoples’ food sources and security has been a go-to for governments and authorities for generations. Bison of the plains — a major source of food, shelter, tools, and fuel for Indigenous plains peoples over thousands of years — were wiped out by Europeans as a method of profit, control, and genocide. The bison population went from over 60 million in the early 1800s to just a few thousand in less than 100 years. This is the fastest rate of extinction of any species in human history.

Widdowson goes on to state that TK can be used to “justify any activity, including the overexploitation of resources.” This sentence is one of the most ridiculous things I have ever read, when for over 150 years under colonialism, Indigenous lands have been appropriated for settlement and resource extraction. To accuse Indigenous peoples of setting out to harm the Earth using traditional knowledge is simply laughable; the environment is our traditional source of food security and culture — we are the land. I would like to see Widdowson’s sources, but she fails to cite most of her claims. It is widely reported and known that Indigenous peoples have been — and continue to be — poisoned, disenfranchised, and exploited by governments and multinational resources companies.

On Turtle Island, simply look at the effects of mercury poisoning from Reed Paper’s chemical plant in the ’60s and ’70s in Grassy Narrows, Ontario; Nalcor’s Muskrat Falls project that threatens to poison the Innu’s primary source of fishing and hunting; and the impact of the Dakota Access Pipeline on the Standing Rock Sioux Tribe’s treaty fishing and hunting rights. Elsewhere, there is the deforestation of the Amazonian regions of Bolivia, Brazil, and Colombia; Peru’s Indigenous peoples’ protest against relicensing of oil concession; and protests over mines in Northeast India… All over the world, Indigenous peoples and their lands are being used and abused without consultation or consideration.

When Indigenous peoples are not included or consulted in environmental assessments, Indigenous experiences are not considered, which means that consequences set upon us by the rest of society go unnoticed, unexplored, and ultimately, untreated. For Indigenous peoples, this means loss of food security and food sovereignty, food and water contamination, severe medical conditions, diseases, and more.

Widdowson may want to read the United Nations Declaration on the Rights of Indigenous Peoples (UNDRIP) to understand better the efforts proposed to protect Indigenous peoples worldwide: its articles clearly present the oppression, marginalization, and exploitation suffered by Indigenous peoples and how to address these human rights violations in concrete ways.

Indigenous peoples are organizing like never before to address political, economic, social, and cultural enhancement and to end all forms of discrimination and oppression. This article is an effort to support that. I encourage Widdowson to do the same.

Note: A special shout-out goes to the Financial Post for publishing hate speech against Indigenous people on National Indigenous Peoples Day. This will not be forgotten.

Melanie Lefebvre is a Métis/Irish writer and visual artist living on Mohawk Territory.