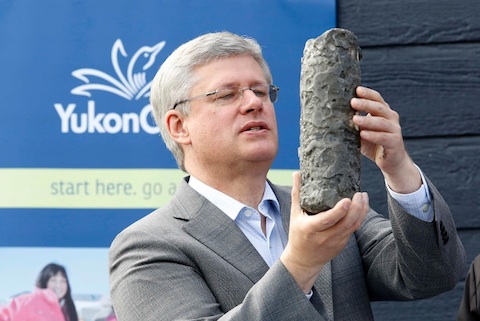 EDITOR’S NOTE: from time to time, CANADALAND will post stories filed by journalists but spiked by their editors. CANADALAND has verified the identity of this article’s author, a National Affairs reporter with a major Canadian news agency that refused to run this piece.  Submissions of spiked items can be sent to jesse@jessebrown.ca

Now that Prime Minister Stephen Harper has wrapped his ninth consecutive summer tour of Canada’s North, do you feel more informed about the issues facing the region and its people?

During this year’s pilgrimage to the territories, Harper visited the Yukon, Nunavut and the Northwest Territories over six days, on the public’s dime. His office did not respond to a request for the full costs of either this recent trip or any of his previous eight.

During this year’s iteration, Harper made announcements about bringing broadband to northern communities and promoting agriculture in the region, spoke to supporters, participated in a Canadian Armed Forces exercise and vowed to find the missing Franklin expedition. He also managed to ruffle quite a few feathers when he rejected calls for an inquiry into the ongoing matter of missing and murdered aboriginal women.

His itinerary offered Canadians a glimpse at the stunning and unparalleled beauty of the territories.

But there were some stops he missed, that could have offered Canadians a deeper, fuller look at the region.

His annual trip is important, the prime minister said early on, during a speech in Whitehorse, because it helps bring to light the “unique challenges” citizens of the North experience. Going one step further, Harper said all Canadians should own those challenges.

“Because after all, Canada is the North and the North is Canada,” he said in Whitehorse.

In that vein, here are some items the prime minister could have included on his six-day trip that may have shed some light on those challenges facing the northern regions and communities few Canadians have the opportunity to visit.

The state of health care in the North is dire. Just last week, Statistics Canada reported that fewer than half of Inuit aged 15 and older report “very good” or “excellent” health – down more than 10 per cent since 2001.

That same report revealed 43 per cent of Inuit in that age range have been diagnosed with chronic conditions such as high blood pressure, diabetes and mood disorders.

Also absent from Harper’s itinerary this year was mention of the mental health issues facing northerners, despite the fact the prime minister toured the country’s suicide capital. Given the degree mental health and suicide has been in the news these days, surely it warranted a mention?

A staggering 63.3 people per 100,000 people in Nunavut killed themselves in 2011, when the national rate is 11, according to Statistics Canada. The rates in Yukon and NWT are lower, at 13 and 12.4 per 100,000 respectively, though those still rank among the highest in the country.

While Harper was in Iqaluit, he would have been close to the Baffin correctional Institute in Nunavut — an overcrowded, squalid facility the federal Correctional Investigator, Howard Sapers, described as “appalling.” Inmates there are kept in cells at up to four times the intended occupancy, and the jail’s guards are said to lack the resources to tackle to drugs and contraband flowing through.

Although the jail, like education and health care, fall under the territory’s jurisdiction, Ottawa and Nunavut have an agreement under which the territorial jail can sometimes hold federal inmates.

Harper also skipped the dump fire that has been burning toxic fumes in Iqaluit for more than 100 days, though a small group of protestors managed to call some attention to the environmental and health hazard while the prime minister was in the capital city.

Under Harper, the federal government has made investments in the North — recently in science and technology and increasing agricultural output (which would hopefully drive down the high price of food), as well as launching training programs to help locals take part in natural resource extraction, and creating the Canadian Northern Economic Development Agency.

But if the goal of these annual trips is to help Canadians identify with the territories and the people who call the Great White North home, the prime minister will have to re-jig his itinerary. There is clearly a slew of humanitarian issues Canadians following Harper’s traipse around the North did not see.

Again, it’s the taxpayers who have footed the bill for the trip he has taken each year since becoming prime minister in 2006. Instead of hanging out with rangers, getting up close to majestic icebergs and riding snowmobiles, Harper should show Canadians what’s happening in the North and convince them he cares.

While he’s made a point of touring the North every year since 2006, the area gets much less attention when it comes time to campaign — during the 36-day campaign in 2011, when the Conservative party was paying for Harper’s travels, he flew to Yellowknife late one April day for a rally before returning to Ontario the following day. That’s the only face-time the territories got with the prime minister during that campaign.

Perhaps it’s not worth the party’s time and money, considering how sparse the population. But if that’s the attitude, Harper can’t blame Canadians for wondering about his dedication to the North.