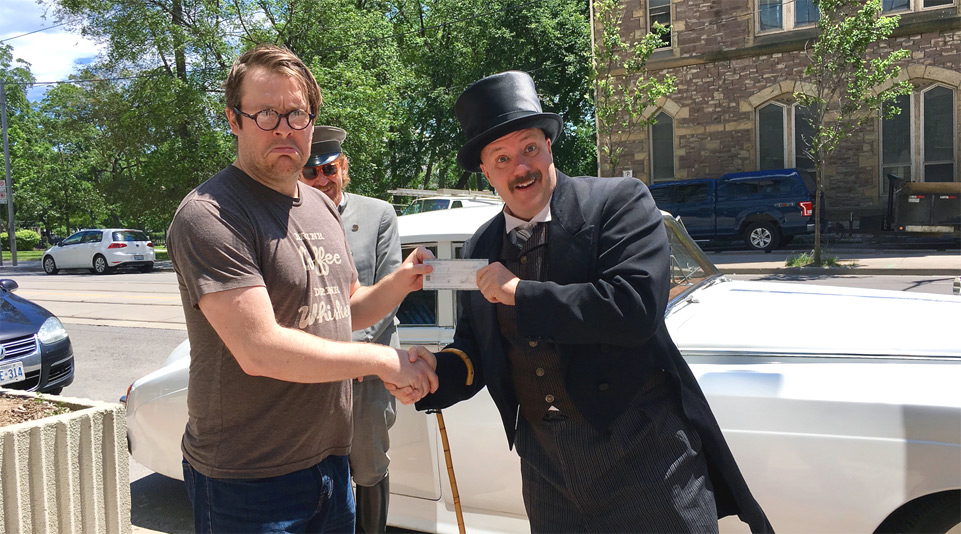 Going To Extravagant Lengths To Troll A Toronto Life Hate-Read

Poor Todd Ferguson couldn’t get a Rolls-Royce and had to settle for a Bentley.

The gleaming, ivory-white, 1956 Bentley S1 glides through the streets of Toronto on Monday, June 26, soaking up attention as if the sun were its own personal spotlight. Pedestrians swivel their heads to gawk at the anachronistic luxury vehicle, some waving as if it contained royalty.

After pulling to the curb on the Danforth, a chauffeur, clad in a grey suit and cap with knee-high boots, opens the rear door for the car’s sole occupant.

Ferguson emerges from the car and darts through the door of the offices of ACORN, a tenant advocacy group.

Up a flight of stairs, inside the second-floor office, amidst a jumble of electrical cords, stacks of legal documents, sloping floors, and staff working hard to protect low-income tenants from slumlords, Ferguson is out of place in his tuxedo, top hat, and monocle.

“My name is Todd Ferguson, Esquire,” he declares. “Unfortunately, I have lost a bet on the internet.”

Setting down his rattan cane and removing a chequebook from his breast pocket, Ferguson addresses the group’s national head organizer, Judy Duncan.

“I bet that I could raise $730,000 to support the Humphreys-Jheon family, so these impoverished homesteaders could own a mansion in Parkdale, in addition to their cottage and their vacation property in Mexico. Having failed to meet this goal, I promised I would donate whatever was raised to four tenants’ rights organizations. Being a man of my word, I am here to present you with this cheque.”

The monocle falls out as he writes a cheque for $1,090, drawing fancy slashes through the zeros, and adding “gentrification bet” in the memo line.

With that, Ferguson sashays back into his Bentley and zooms off to the Federation of Metro Tenants’ Association’s office to drop off another cheque.

Fumbling to get the monocle back in place, he gets frustrated with the theatrical commitment of his bit.

About 10 years ago, Ferguson was my roommate for one summer. He is also a friend of CANADALAND head doofus Jesse Brown.

Recently he took up this town’s favourite pastime, being baited by Toronto Life features about spoiled people who impulsively spend too much. Last year it was “Tony,” the partying pharmacist who prizes expensive wine over home ownership. Last month, it was Catherine Jheon’s feature about her family’s struggle to renovate the “crack house” they bought in Parkdale.

Within the social media piñata of criticism, the best take came not from a journalist, writer, or comedian, but from Ferguson, a labour organizer. Ferguson started a GoFundMe campaign, presenting himself as a wealthy elitist sympathetic to the plight of the Parkdale gentrifiers, using the opportunity to shift the focus back to those being gentrified — the renters or squatters being kicked or priced out of affordable neighbourhoods — while raising money in aid of support organizations.

Citing philosophical evidence from Goethe to Adorno in support of his renovation decisions, blaming both editors and his wife, recounting a childhood at private school and an unrealized career as a jazz musician, decrying 4,000 words as insufficient to recount the story of a reno, while dismissing financial support from a wealthy family member as coming from a godfather, and therefore not technically family, Humphrey’s novella did not succeed in reversing the perceived damage to his public image. Within a day or two, the post was deleted.

After the final round of self-inflicted wounds, Humphreys seemed to have learned to keep his mouth shut.

Meanwhile, Ferguson’s joke campaign had raised $4,798. After a nine percent commission to GoFundMe, he has four cheques for $1,090.43 each to donate to tenant advocacy groups. He’s not used to being in the spotlight, his work usually focused on advocating for others. The Bentley and tux are on his dime.

Back in character, chequebook burning a hole in his pocket, Ferguson is determined to keep the gag running while literally delivering on his promise.

“If the city keeps providing things for free, or enables people to rent,” says Ferguson, “where is the incentive for people to ask a wealthy relative for $100,000? Who is going to teach them the values of bootstrappedness?”

At the Advocacy Centre for Tenants Ontario, he hits a snag.

“What kind of bet did you lose?” asks one staff member, who gets her boss to deal with Ferguson.
Communications coordinator Bahar Shadpour informs the man in the top hat that the agency doesn’t accept donations, but suggests giving to Parkdale Organize, which would help funnel it to residents currently on a rent strike.

So far, more than 300 Parkdale tenants have withheld their rent through May/June. Over 200 N4s (eviction notices) have been issued. So far, management company MetCap is negotiating with tenants, rather than pursuing the N4s with the Landlord and Tenant Board. If they do pursue eviction, Shadpour believes that Ferguson’s money would be better earmarked to help with the $190 filing fee that landlords can ask to recoup from tenants.

After Shadpour tears up the cheque, someone working in a nearby office voices her admiration for Ferguson.

“Did you write that? It was pretty darned funny,” she says, adding that she thought Toronto Life was joking with the original story.

At Parkdale Community Legal Services, Ferguson is greeted with more laughs from employees.

“So nice of you to think of that brave family,” comes a voice from a cubicle.

Community legal worker Cole Webber is busy with the Parkdale rent strike. Local residents are on day 56 of their protest against the dilapidated state of rental housing. His office is littered with protest placards.

As Ferguson fills out cheques, he slips out of character when the two realize they know each other from Halifax, where Webber was organizing for the Coalition Against Poverty and Ferguson was unionizing a casino.

“We unionized the fuck out of it,” Ferguson tells me privately.

Rising property values and development displaces renters, the people (and this includes drug addicts) whose presence made the neighbourhood what it was.

Often the only things standing between the endless appetite of developers and the rights of tenants are organizations like these.

So some good, in the form of money and attention, did come out of the “we bought a crack house” story.

As for the Humphreys-Jheon family, Ferguson only has this advice:

Photos by Corey Mintz, including the top one depicting the delivery of a cheque to Geordie Dent of the Federation of Metro Tenants’ Associations.