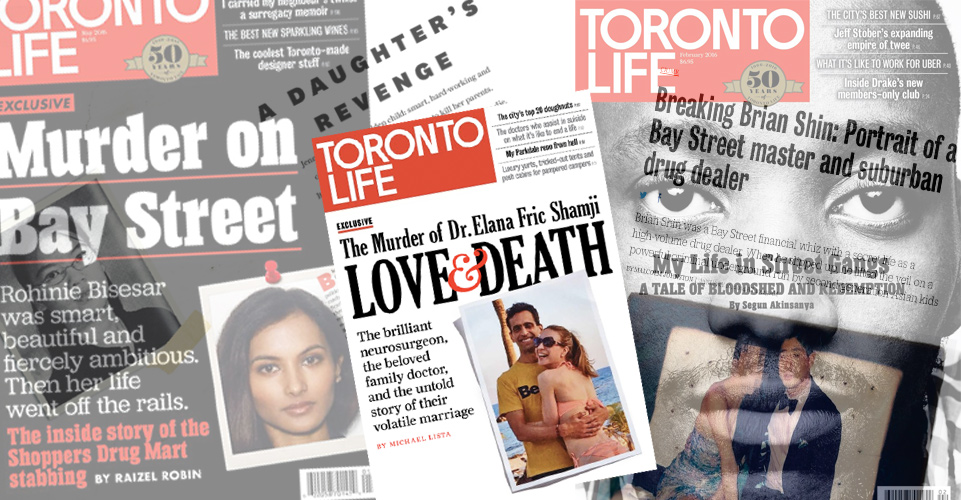 In its June issue, Toronto Life published the tragic story of the murder of Dr. Elana Fric-Shamji, whose body was found stuffed in a suitcase in a creek near Vaughan. Her husband, Dr. Muhammad Shamji, is currently on trial for her murder. The story, written by Michael Lista, paints a picture of an abusive relationship hidden behind the façade of an idyllic marriage. Well-written and thorough, the piece serves as a grim reminder of the violence against women that is present in even the upper echelons of society.

But the article also served as another example of a troubling trend that runs through Toronto Life crime stories, particularly those that involve people of colour.

Dr. Shamji was a world-renowned neuroscientist who excelled in his field. In the professional world, he was a charmer, gaining the respect of his peers and patients alike. But behind closed doors, he was an allegedly violent and abusive person who was eventually charged with murder. In other words, he was a professional who was adept at hiding his darker, sinister personality. While this might seem like a unique story, Toronto Life has run similar ones in the past, which all follow a common trope: the professional person of colour who appears to be successful but has a dark secret behind them.

There was the story of Brian Shin, the Bay Street star who secretly dealt drugs; the story of Jennifer Pan, who, under intense pressure, lied to her Vietnamese-Canadian parents about her grades and university admittance and ended up ordering their murder; and the story of Rohinie Bisesar, an MBA graduate who tried and failed to establish a career on Bay Street, and was charged with fatally stabbing a woman in a Shoppers Drug Mart in 2015. Individually, there is nothing inherently wrong with these stories, but put together, they form a troubling pattern: a narrative begins to form that portrays people of colour in the professional world as being dangerously deceptive, or not as successful as they portray themselves to be.

Since the beginning of 2016, Toronto Life has published 11 feature stories about people of colour. Five of these concerned violence or tragedy, two collected short profiles of different immigrants and migrant workers, two were about people of colour fighting for their rights, and the last two were about the journey of a woman who regains her eyesight and YouTube star Lilly Singh, respectively. (We’re not counting the first-person account of “Tony,” the pseudonymous well-to-do pharmacist who chooses to live with his parents and makes reference to their having immigrated from the Middle East.)

The stories that dealt with violence and tragedy included those about Bisesar and Shamji and one on the late Star reporter Raveena Aulakh. The others were personal essays about surviving violent situations: in the February 2016 issue, Segun Akinsanya told his story about being involved with street gangs in Toronto; a year later, Samara Zafar wrote about how she escaped an abusive forced marriage to go on to graduate from the University of Toronto.

These stories about people of colour paint a grim picture: we are either doomed to succumb to violence, or we escape it and become model citizens, our stories serving as inspirations to others.

Of course, Toronto Life did write about people of colour outside of this context as well. But even then, our existence should not be limited to that which can fit into neat little boxes; there is more to write about people of colour than just the experiences of immigrants or the stories of those fighting oppression. Our lives are rich and complex and deserve to be represented in writing. Part of the problem, though, is that so few us are given the opportunity to write. Of those 11 Toronto Life pieces published over the past year and a half, only one — save the personal essays — was written by a person of colour.

Yes, Toronto Life has also published stories about a white businessman murdering an investor, and they have featured personal essays from former drug addicts who happen to be white. But when whiteness is the norm, individual stories do not create stereotypical narratives. A few stories about crime do not matter when most pieces in general are about white people.

This is not an argument against crime pieces about people of colour; these stories, even those that portray a person of colour in an unfavourable light, do deserve to be told. But we must start asking questions when these stories become disproportionate.

Representation is not just a question of being represented; it’s a matter of how you are represented as well. A simple solution would be to hire and publish more people of colour — the more mastheads reflect our diverse communities, the better we will be at portraying them.