After a topless Femen protester crashed a Quebec cabinet minister’s press conference late last month, some reporters in the Quebec Parliamentary Press Gallery wondered aloud if VICE had something to do with it. The media company had never reported from the National Assembly before, and yet it had a three-person camera crew on hand to film Neda Topaloski as she yelled in protest against a health-care bill she argued would limit access to abortion.
News Brief By Geoff Vendeville
Share

After a topless Femen protester crashed a Quebec cabinet minister’s press conference late last month, some reporters in the Quebec Parliamentary Press Gallery wondered aloud if VICE had something to do with it. The media company had never reported from the National Assembly before, and yet it had a three-person camera crew on hand to film Neda Topaloski as she yelled in protest against a health-care bill she argued would limit access to abortion.

In a series of tweets, Les Perreaux, who covers Quebec politics for the Globe and Mail, said VICE had “punked (its) own side” by going along with the protest, since it would probably encourage the assembly to crack down on journalists’ access. 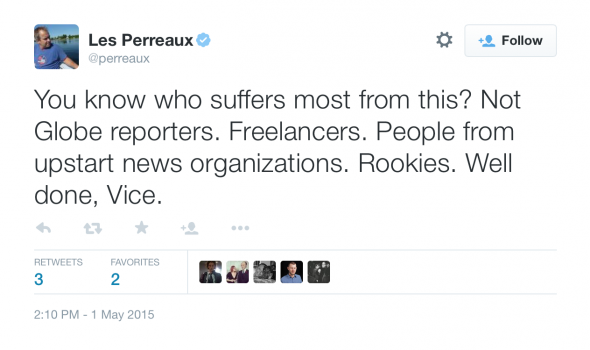 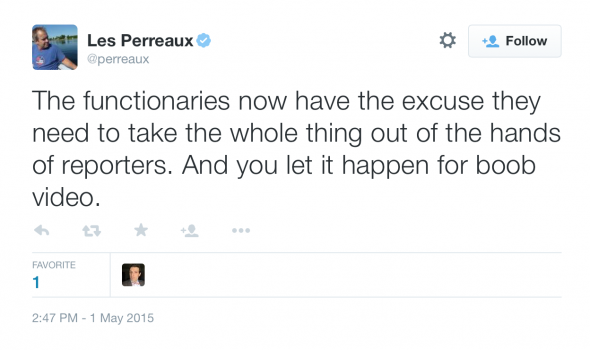 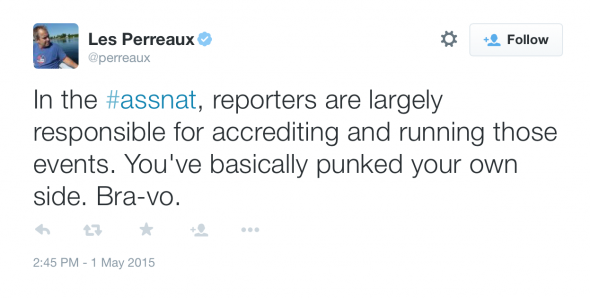 In an email to CANADALAND, Perreaux added that he doesn’t know if VICE should have intervened if they had prior knowledge of the protest, but, if they did look the other way, that would be “counter-productive to the conduct of journalism at the National Assembly, on the whole. Especially for new entrants to the game – young reporters freelancers people working for places like VICE – who are going to have a harder time getting accredited now.”

“They knew she (Topaloski) would pose as a reporter but they didn’t collaborate in the plan to pass herself off as a journalist,” she said.

VICE was shadowing Topaloski because they had been shooting a documentary about the Canadian chapter of Femen, she explained.

As for their knowledge of the accreditation process, Femen said they had researched it on their own, but didn’t provide details. According to a CBC report, Topaloski secured a temporary press pass, issued to her for Libération Next magazine.

The same day as the protest, the assembly opened talks with the press gallery to tighten security. The changes were made quickly.

For one, every application for a press card now must be vetted by the president of the press gallery. And, where those with a temporary pass used to be able to move freely through the assembly, they now have to go through security checks.

Alexandre Robillard, the president of the press gallery and a reporter for La Presse Canadienne, said the new measures are temporary, but “it’s clear that the (security) criteria will be augmented” in the long run.

Soon after Topaloski was removed from the news conference by a security guard, Robillard asked a member of VICE’s crew what they were doing at the assembly. They told him they were there to shoot stock footage of Quebec City and “denied all links to the event,” Robillard said.

How much VICE knew about Topaloski’s plans isn’t the issue, according to Robillard.

“We just want to be sure that no one is facilitating this, that the privileges of the press gallery aren’t being used by pressure groups,” he said.

A senior Canadian editor at VICE didn’t respond to two requests for comment.

Since VICE knew Topaloski would pose as a reporter, according to Femen, did they have any ethical responsibility to step in?

Alan Conter, a media law and ethics lecturer at Concordia University, said VICE didn’t have to share the information unless they had reason to believe the protest would be of a “criminal nature (beyond exposing breasts).”

Geoff Turnbull, a journalism ethics instructor at the University of King’s College in Halifax, agreed:

“Femen may be on the radical side for some people, but their right to protest is surely protected. Do I agree with their using the press cover to do it? No, I don’t, but then, I’m a member of the journalism establishment, I suppose, and my opinion is skewed by that. On the other hand, I don’t like Israeli or American spy agencies using Canadian cover identities, yet they do it all the time.

If VICE knew this was coming for whatever reason, it was their story. We tend to protect our stories. It’s the nature of the beast. They couldn’t assume that it would lead to some kind of official crackdown. That is a whole separate issue which we can’t lay at VICE‘s door.”

On the other hand, if VICE had helped organize the stunt – by coaching Topaloski through the accreditation process, for example – then they would have compromised their journalistic independence and credibility, Turnbull said.

So VICE probably gets a pass, unless… and I hope it’s not the case, VICE helped Topaloski get the pass and colluded with Femen to create a story.

Geoff Vendeville was a reporter for the Montreal Gazette at Quebec’s National Assembly. He is starting an internship at the Toronto Star in June. Find him on Twitter @geoffvendeville.