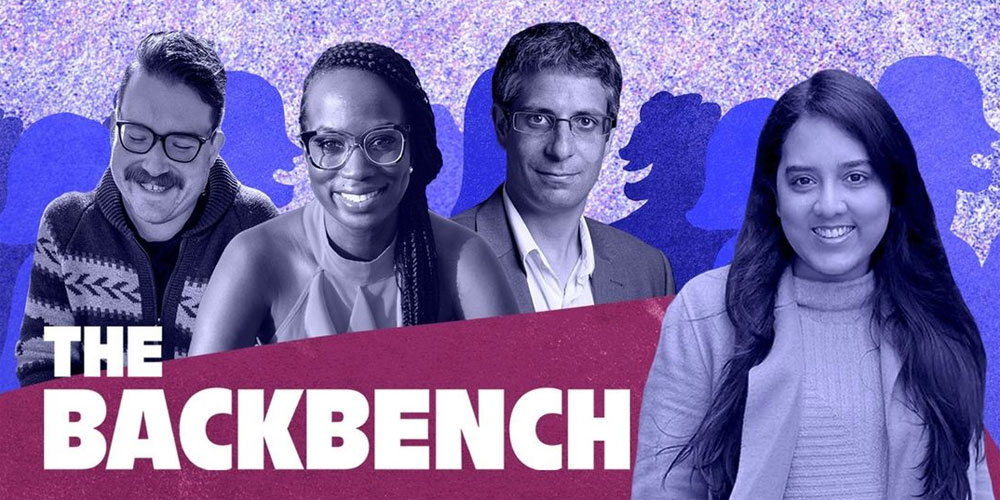 No Horse Races, No Polls

Canadaland publisher Jesse Brown acknowledges that he has “big ideas” about what a Canadian politics podcast should be. But he says he also doesn’t follow the subject all that closely and that therefore his smartest move in developing a new show about it was to “kind of back off and shut up and let [its host and producer] work.”

The result was The Backbench, which premiered in May and has now shifted from biweekly to weekly as it covers its first federal election.

Hosted by Fatima Syed and produced by Tiffany Lam, the show includes a rotating cast of panellists from across the country: Ricochet co-founder Leena Minifie in Vancouver; Maclean’s Jason Markusoff in Calgary; Crestview Strategy’s Jaskaran Sandhu in Brampton; former MP Celina Caesar-Chavannes in Whitby, Ontario; The Logic’s Murad Hemmadi and The Hub’s Stuart Thomson in Ottawa; Le Devoir and CANADALAND’s Emilie Nicolas in Montreal; and The Independent‘s Drew Brown in St. John’s.

This week on the CANADALAND feed, we’re running the most recent episode of The Backbench, “Health Vs. Healthcare,” along with a new conversation between Jesse and Tiffany about what sets the show apart:

Here’s an edited version of that conversation:

Jesse Brown: What was your and Fatima’s vision for The Backbench? Going into this, what did you two want it to be?

Tiffany Lam: For us, it was really important to focus on the issues. Fatima says this all the time: she hates horse races, and she hates polls.

From the start, we wanted to have a diverse panel — not just in views, but also geographically. So we have the two people in Ottawa, but we have folks on the East Coast, like Drew Brown. And then we also have Leena Minifie, who’s out in B.C. We have Jason Markusoff in Calgary. We wanted to get a sense of how different areas of Canada are influenced, and to do it in a way that’s kind of fun and accessible and not too stuffy and serious. We want to be able to laugh at ourselves and laugh at the people who are supposed to be leading.

The accessibility piece is also really important to me. Fatima and I, we talk about this a lot, we’re not your typical Ottawa pundits. We are daughters of immigrants, and we want our families to be able to understand it. We want it to be able to get more people on board, I guess.

Jesse: That inclusiveness, without it being like politics school, is something that comes across. And also meaningful diversity. Like, not just diversity in a way that’s kind of like us satisfying our own sense of who should be on the show, but regional diversity, as well as ethnic and racial diversity, as well as ideological diversity. That actually makes the show better, because you’re hearing different stuff. That definitely comes across in what you’re doing so far.

Who do you imagine as the listener? Who is the show for?

Tiffany: I want it to be for people who are generally confused about other political coverage. When I when I watch political coverage, sometimes I don’t even understand what they’re saying. Like, they’re just saying so much, and it doesn’t fully compute in my head for some reason.

So the show is for people who are looking for more clarity, looking for more context. We’d love to have more young people on board. But I don’t even think it’s about what demographic you’re in. It’s just about if you’re generally confused and bored by what else is out there.

Jesse: What is the plan for election night?

Tiffany: Right now, our plan is to have a Twitter Spaces event, where we hope to have contributors from The Backbench and other political journalists and hopefully other people from the Canadaland network — like you and Arshy, Allison and Jonathan, any of the producers who want to join — just to kind of talk about what they’re seeing, what they’re noticing, and then also maybe take some questions from listeners.

Jesse: Yeah, I mean, I think we kind of know our role. People, during the actual election night, are watching breaking news on TV and wherever, and maybe following along on Twitter.

But The Backbench will also have the postgame analysis the next day. And I think it’s going to be really interesting, because I know that Fatima, like a lot of Canadaland hosts, has found herself in high demand. She is a hot commodity in Canadian political commentary right now.

I think the main thing is just that people should subscribe to The Backbench. But if they’ve got a young person in their life who might otherwise have no interest in listening to a podcast about Canadian politics, this might be the one to turn them on to. Spread the word about the show.

Tiffany: I would even suggest, also, the older person who has no interest, who feels disenfranchised or out of the loop. I was talking to my dad, for example, and asked him, “Hey, are you going to vote? Are you thinking about it?” And he’s like, “I don’t even get it. I only know their names…”

Jesse: I hear you. What is this mono-focus on the youth? Let’s get the old people. I’ll take it.

The Backbench comes out Tuesdays — except for this week, when it will be out on Wednesday, September 8. Subscribe here.