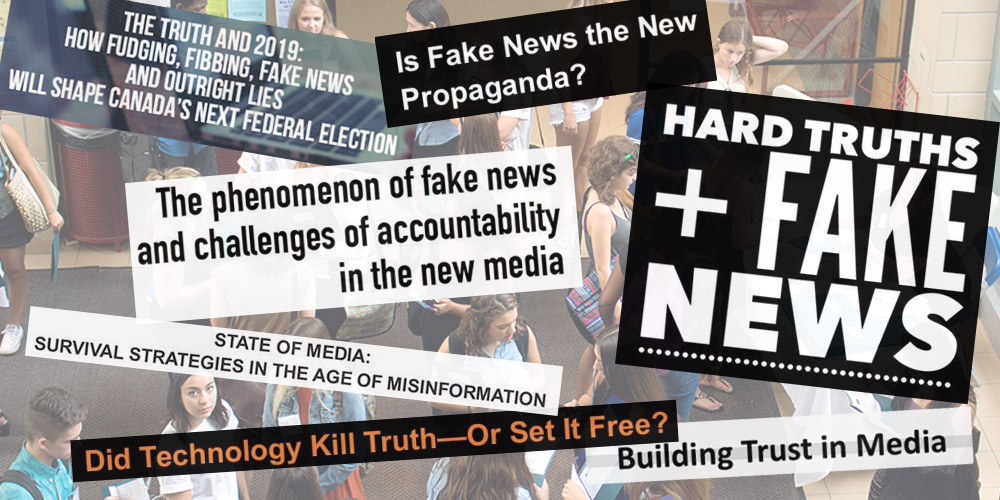 Please teach us how to navigate a shrinking industry looking to exploit us, instead
Opinion By Ben Cohen
Share

Discourse about contemporary journalism has become incredibly, awfully stale. Since starting j-school in 2016, I’ve attended many journo lectures and panel discussions, and more often than not, the conversation gets shifted to fake news or Donald Trump and stays there.

Speakers at journalism conferences and instructors at journalism schools are hyper-focused on a presumed proliferation of fake news. This is detrimental to both the training of j-school students and the ongoing education of journalists.

The discourse is tired. The takes are frigid. There’s no levity, no insight, no solutions. Student journalists are stuck in an endless cycle of listening to old boys tell us how awful and dramatic the media landscape is now.

Worse, this obsession obfuscates true threats to the industry, which share no causal link with either fake news or media distrust (another conference cliché).

Ebbing trust in media is an important conversation to have, but it doesn’t deserve to permeate nearly every intra-industry discussion — especially in Canada, where the latest Reuters Institute Digital News Report has shown Canadians are relatively trusting of our local news. (Though we are gradually following the larger global trend of trusting journalists less.) The fact is, journalism students aren’t worried about whether or not people will trust us as much as they did 10 years ago. We’re worried about getting jobs.

“I’ve been a journalist for 40 years. I can say this is without a doubt the most difficult time to be a journalist.”

That’s a direct quote from a speaker at the Asian American Journalists Association’s conference in Hong Kong I attended in June. I would agree with him and the other speakers who echoed him during the three-day conference, if only they weren’t referring to some people believing made-up stories.

As a reporter for the Ryerson Journalism Research Centre this past year, my job was to distill conferences and panels led by established journos. Combined with years of journalism school, this adds up to quite a few lectures attended. I’ve listened to Craig Silverman’s “Fake News, Real Consequences” Atkinson lecture, heard Daniel Dale talk about “avalanche(s) of deceit” in politics and media, and spoken with researchers about their findings on the prevalence of fake news. It’s all very interesting, until it isn’t. Until you’ve heard it dozens of times.

The media is top-heavy with the overworked and underpaid, and I never heard anything about the myriad ways it will want to exploit me in all the lectures and classes I’ve sat through.

To younger journalists, fake news is a joke. It’s overwhelmingly shared by boomers. Anecdotal as this may be, I don’t know anyone who would bring it up unironically.

One of our first j-school assignments was to interview other students on campus about fake news. It was impossible to get any meaningful answers because, for starters, hardly anyone our age regularly reads the news anymore. They don’t think about fake news because they don’t think about the news, period. And those that do don’t consider fake news a serious threat to the free press. Fake news just isn’t present in young people’s lives until it shows up in the form of a dubious Facebook share from an elderly aunt.

The fake news “pandemic” and the distrust it might be sowing is a generational issue. The solution is to teach people to be discerning, tech-savvy readers, not to burden burgeoning journalists with an expiring anxiety.

Some older newsies have also gotten sick of it. Working at the Toronto Star this past summer, I overheard an editor complain to their colleague about an upcoming conference.

“Of course, it’s about fake news,” the editor said. “As if we haven’t heard enough about that already.”

If you want to talk about what is actually making it more difficult than ever before to be a journalist, let’s talk about atrophying newsrooms and budgets. How dismal job prospects are. How rampant layoffs are. How difficult it is to monetize the news.

Talk to journalism students about how to not feel broken down after seeing their fifteenth internship rejection in a row. How to manage the elevated expectations on us now that we all have to be quality photographers, videographers, directors, editors, social-media mavens, writers, data-parsers, and fact-checkers to even hope to get a good job.

We live in an age where media outlets look to hire “freelancers” to work at their offices for 30 hours a week. Where some freelancers are contractually obligated to keep their wages secret. Where unions fight tooth and nail to gain recognition. The media is top-heavy with the overworked and underpaid, and I never heard anything about the myriad ways it will want to exploit me in all the lectures and classes I’ve sat through.

Spinning staff jobs as freelance gigs is a common way for publications to exploit workers. Here's how @WIRED attempts it. pic.twitter.com/FJTAw0Cigj

.@voxmediainc has been forcing freelancers (at point of contract) to keep their pay rates secret. Seems to me like talking about one’s pay is federally-protected activity. Calling on @IWWFJU to weigh in https://t.co/R3nLk4PTvG

I’d contend that no one has ever learned anything valuable in lectures with titles approximating “Fighting Fake News” or “Journalism in the Age of Trump.” We need practicality. We need more data journalism seminars, investigative reporting conferences, tips on building our brands and knowing our worth. We don’t need to be told that things are hard for all the wrong reasons, by people who’ve known security of which we can only dream.

Some of the best lessons I ever received at journalism school weren’t on the syllabus. They were asides from instructors and speakers who have run the same gauntlet we’re preparing for. In these easy-to-miss moments, I learned about dealing with libel lawsuits, raising money for projects, supplementing income as a freelancer, bouncing back after a promised job offer gets yanked away, and how ubiquitous PTSD is among war correspondents.

Resources are finite, and because not every facet of the industry can be expanded into its own course, the j-school curriculum is supplemented with guest lectures, conferences, and networking events. But it’s a system that needs to be triaged to work.

Filling the air with a singular focus, especially one as marginal as fake news, dams up the flow of information. Budding journalists need to see a kaleidoscope of speakers, because they’re gearing up for a job as diverse as it is demanding.

Ben Cohen is a fourth-year journalism student at Ryerson University and a reporting intern at The Globe and Mail. You can follow him on Twitter @cenbrohen.