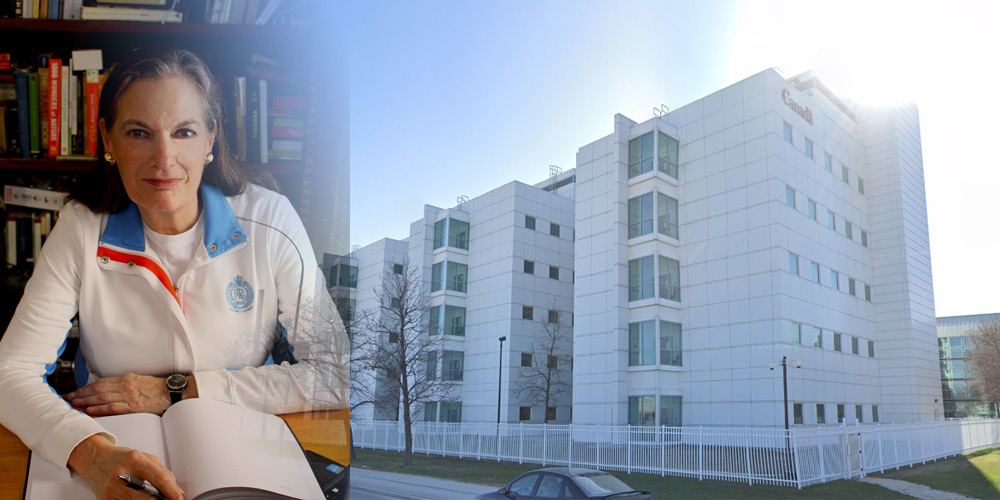 A Different Kind of Lab Leak

While investigating the origins of Covid, author Elaine Dewar turned up new details about China's relationship with Canada's most secure virus lab
On the Monday show By CANADALAND
Share

With its “Field Notes” series, Biblioasis aimed to print a series of books inspired by “the tradition of pamphleteering.” The Windsor, Ontario, publishing house promised “drop-in titles responding to developing world events,” with a “small trim size and affordable price points.”

The first three volumes — Mark Kingwell’s On Risk, Rinaldo Walcott’s On Property, and Andrew Potter’s On Decline — each clocked in at just over a hundred pages.

The fourth — Elaine Dewar’s On the Origin of the Deadliest Pandemic in 100 Years: An Investigation, released at the end of August — comes in at 472. Dewar has a lot to say, and did a lot of digging to support it.

“Because we were in a pandemic,” the Toronto journalist and author says, “I was in a situation where getting on a plane was not gonna happen. Going to interview people was almost impossible, because people were not in their offices anymore; they were working from home. So if I wanted to investigate this story and follow it up, the only recourse I had was to read published peer-reviewed literature and preprint literature that would eventually find its way to peer-reviewed journals. And that’s what I did.”

On this week’s CANADALAND, Dewar speaks to host Jesse Brown about what she sees as the most likely origin of SARS-CoV-2 (the virus that causes Covid) and what she learned when investigating China’s relationship with Canada’s most secure pathogen lab:

Jesse Brown: Does Canada have something to hide?

Elaine Dewar: When I was doing the early stages of the research, there was a conspiracy theory circulating out there, that when the National Microbiology Laboratory (NML) in Winnipeg sent a series of Ebola and Nipah viruses to the Wuhan Institute of Virology in China in 2019, perhaps they also sent SARS-CoV-2, which somehow leaked. The [disproven] theory was that somehow the Winnipeg lab had something to do with the generation of this virus.

Brown: Because we do have a Level 4 virus lab…

Dewar: We have one Level 4 in this country, and there were two people working in it, Xiangguo Qiu and her husband, Keding Cheng, who had, in the case of Qiu, organized the shipment of those viruses. There had been an eruption of concern about the couple, which led to them being suspended, their security clearances withdrawn, and their removal from the NML in July of 2019.

What I was looking at was whether there was anything in the NML’s record that would suggest an unreasonable or unusual relationship with the Wuhan Institute of Virology (WIV). And what I discovered was a really unusual relationship between the NML and Chinese military scientists, which was totally unexpected to me and blew me off my chair. Because to work in the NML, you must have a secret security clearance. And as I’m sure you can imagine, it would not be reasonable that members of a foreign military of a country which is not our friend would have secret security access to that lab. And yet I found a ton of papers.

Brown: You found that a Chinese military figure had security access to Canada’s National Microbiology Laboratory.

Dewar: What I found was that a woman by the name of Chen Wei had done two major papers with Xiangguo Qiu, the woman marched out of the lab, including one as recent as 2020 — so after the security clearance for Qiu was withdrawn, she was still able to access data to produce a paper which was submitted, I believe, in March of 2020, fully seven months after her security clearance was withdrawn. And that Chen Wei was in fact a major-general in the People’s Liberation Army, that she is their leading bioweapons expert, and that she is in particular an expert on the creation of vaccines. She created an Ebola vaccine, which was tested in Winnipeg, and she created the first SARS-CoV-2 vaccine that was injected into soldiers in the early part of 2020.

“They needed a lab that was Level 4 status to work on Ebola, and they did it in Winnipeg”

Brown: A Chinese major-general with a specific expertise in bioweapons was connected to the Level 4 lab in Winnipeg and worked directly with Xiangguo Qiu?

Dewar: They were the last authors listed on the paper, meaning the senior supervising authors of that piece of work.

Brown: So these are scientists working together, though one is a major-general. But this is a secret lab. And the couple, Xiangguo Qiu and Keding Cheng, are fired for some reason and escorted off the…

Dewar: They’d been suspended. They’d been fired by the University of Manitoba, where they had adjunct status and they had been teaching all of these pupils who came from China. No one seemed to know who these pupils were, but it then transpires that a bunch of them must have been with the military in China because when their published papers came out, those were their affiliations stated on the papers.

Brown: So this is suggesting some kind of Chinese-state military infiltration of this facility in Winnipeg. What does China want with a virus lab in Winnipeg?

Dewar: Ebola is the kind of pathogen that may only be studied in a Level 4 lab and has been a kind of focus at the NML for some time. The problem for China was that it didn’t have a Level 4. The French built one for them, starting after the original SARS in 2003. But it wasn’t yet ready until 2017 for any kind of study, and it wasn’t allowed to import into China.

Brown: Where did the French build this?

Dewar: They built it in Wuhan, at the Wuhan Institute of Virology.

Brown: Before the Wuhan Institute got its own Level 4, we had one in Winnipeg. And that’s why they wanted into Winnipeg.

Dewar: Right. Because their Level 4, even when it was functional, still didn’t have permission from the National Health Commission of China to import Ebola to work on in that lab. They needed a lab that was Level 4 status to do that work, and they did it in Winnipeg.

Brown: Why did those scientists get suspended?

Dewar: I would like to think that it wasn’t just this relationship with the military that is in public that everyone can see. I would like to think it was more than that, but I suspect that’s all it was — that, you know, the Public Health Agency of Canada (PHAC) was so lax in its supervision of that lab that nobody noticed what was being published by its leading scientists.

Brown: So this is no “Canada’s in on it” thing. This is a “Hey, wait a second, these scientists are collaborating and we’re doing research with a Chinese military general who probably shouldn’t be in our lab” thing.

Dewar: We don’t know she was physically in the lab, but we do know she had data access. And a security clearance deals with both — not just physical access, but to the data which is produced by that laboratory.

“If I were an MP, I would be asking all kinds of questions”

Brown: In terms of Canada’s role in a cover-up, who was it who refused to answer Parliament’s questions?

Dewar: It was the president of PHAC. His name is Iain Stewart, and before he was parachuted in, he was the head of the National Research Council, which had a relationship with a company called CanSino Biologics, which provided the cell line upon which Chen Wei developed her Ebola vaccine and later her SARS-CoV-2 vaccine.

Brown: And he stood in parliament and proudly said, “I ain’t telling you shit.”

Dewar: He said, “The Privacy Act precludes me from giving you the information you require.” The House had passed a resolution demanding all of the documentation, all of the email correspondence that led to their firing, in January of 2021. And he refused to hand over un-redacted documents, and the House rose for the summer break (and subsequently the election) before the speaker could decide whether or not to send the sergeant-at-arms to his offices to grab those documents.

Brown: Is there a legitimate reason, a non-scary conspiracy reason, why he would not want to hand that information over?

Dewar: The answer he gave when asked was that it would be embarrassing for Canada among its allies and that there were national security implications.

Brown: Have you a theory as to why he did not want to share that information?

Dewar: Because it would be embarrassing to Canada among its allies and it would have national security implications.

Brown: So the truth is not necessarily that we’re in on some conspiracy with China and America to manufacture bioweapons — more likely just that we messed up and didn’t realize this was happening?

Dewar: That we messed up and didn’t realize that a major-general from an unfriendly power was having that kind of relationship with a secret lab.

Brown: Do you have anything linking the Winnipeg Lab to Covid?

Dewar: They did papers with the Wuhan Institute of Virology, people with Shi Zhengli’s coronavirus lab. And in fact, in 2017, when the U.S. State Department says that the military were starting to move in on the WIV, Xiangguo Qiu had five trips to help train their staff. So the question becomes, trained to do what? And I think, although I’m not sure about this, that that was working with macaques, which are very difficult to work with. And there was a problem in the WIV, according to Shi Zhengli. Their animal labs at the Level 3 were too small to work with macaques. They needed to be worked on in a Level 4, where you have more security. And Xiangguo Qiu had great experience, and clearly they did not. So not only is our Winnipeg lab having a bunch of military from China working on papers which are published in public places, but Qiu, our leading pathogens-vaccine person is in there helping train their staff. Now, why would that be? I don’t know. It makes no sense.

Brown: This is where you don’t have a hypothesis.

Dewar: I have no hypothesis. When I look at the pattern of Xiangguo Qiu and Keding Cheng’s arrival in Canada, and when and why, their movement into the NML, it looks to me as if they were specifically in that lab for the reason of having influence over what it did and perhaps sharing information from what was done there. The problem here is that we don’t know what information has been derived that hasn’t been published. All I can follow is what’s in the public sphere. I have no idea what was worked on but not published. But I would have questions about that. If I were an MP, I would be asking all kinds of questions about that.

Top image: a portrait of Elaine Dewar taken by Danielle Dewar, alongside a Google Street View screencap of the Canadian Science Centre for Human and Animal Health in Winnipeg, which houses the National Microbiology Laboratory’s Level 4 lab.