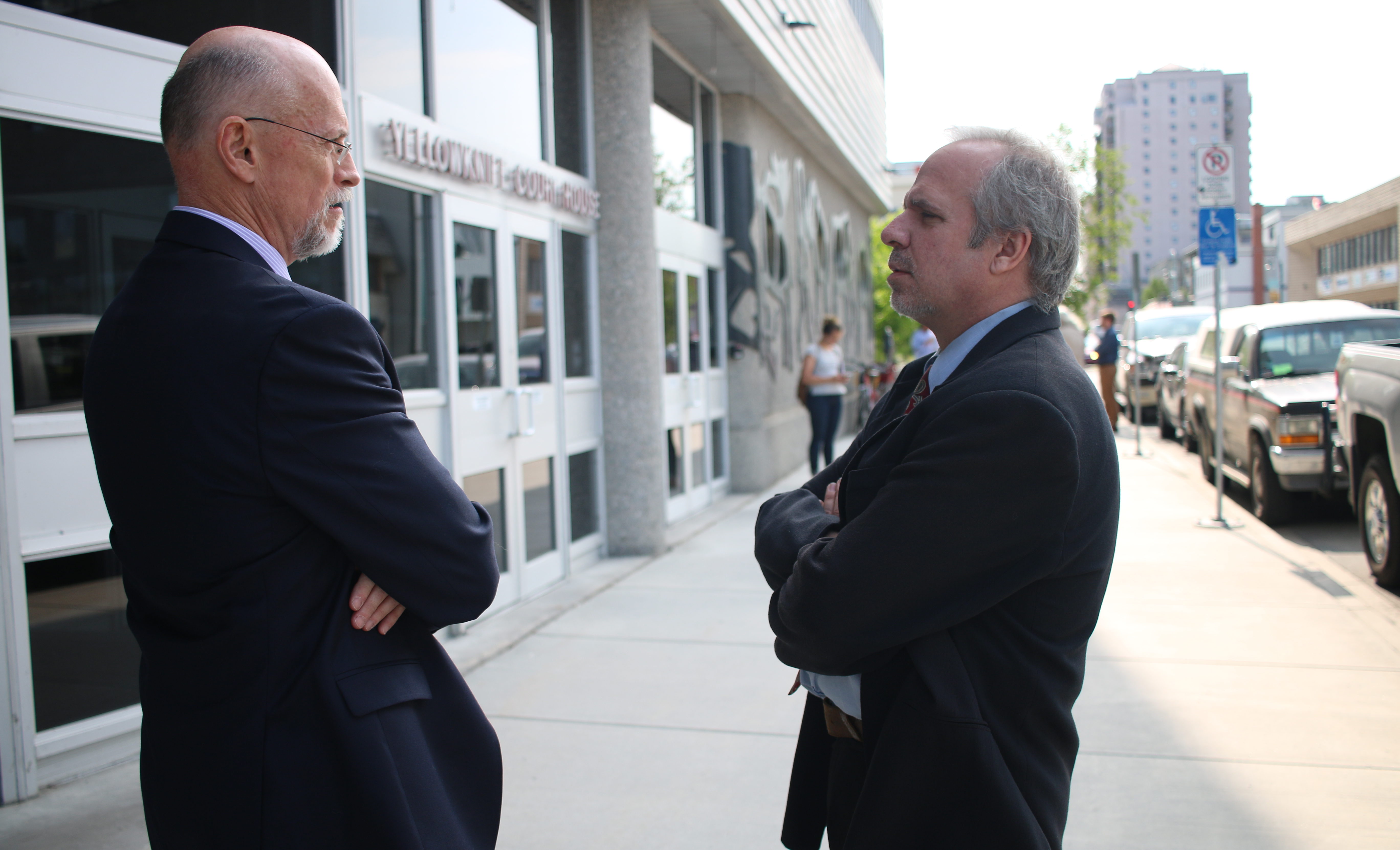 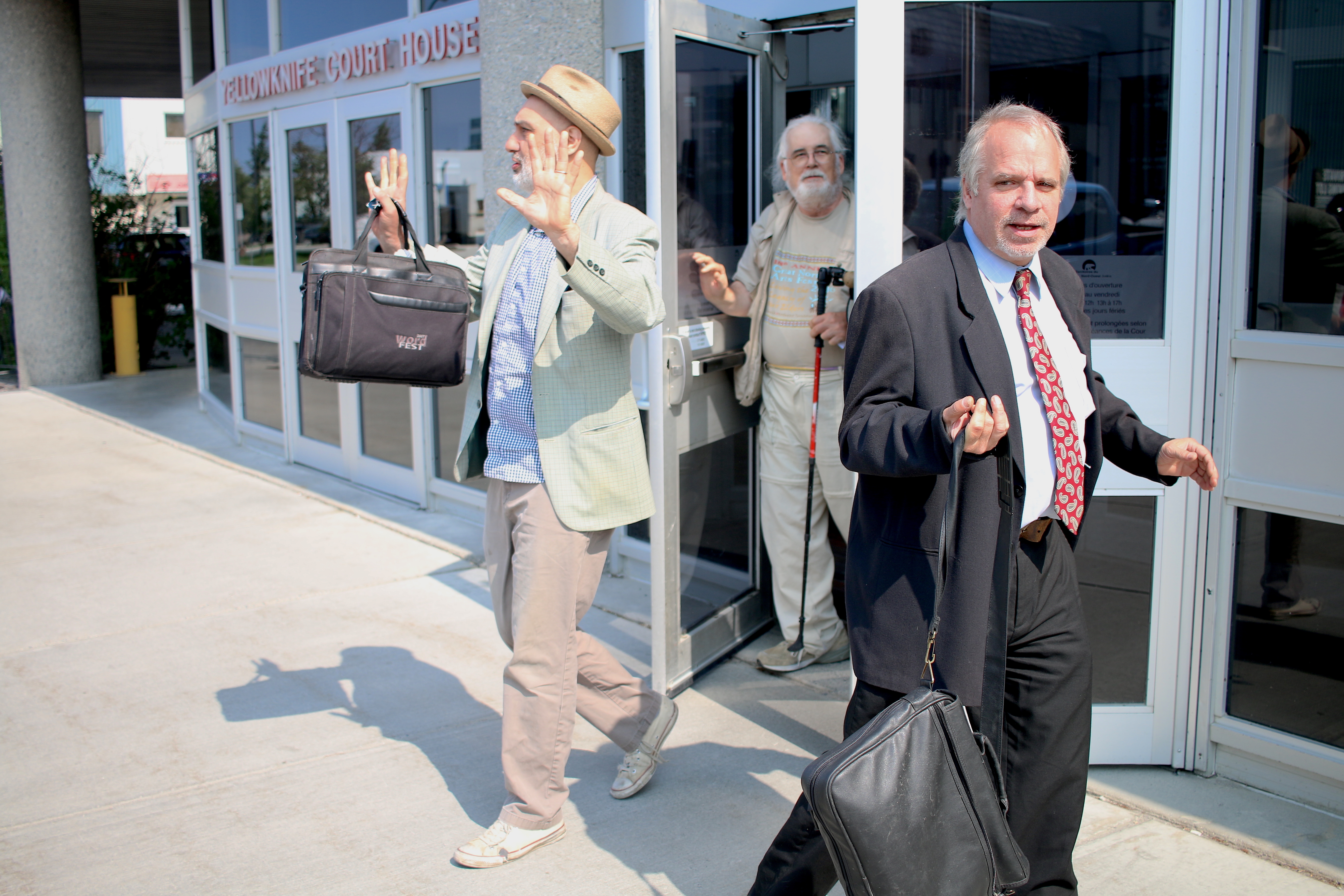 PHOTO: John McFadden walks out of the Yellowknife courtroom with the Rheostatic’s Dave Bidini, left, and local media mentor George Lessard in tow. McFadden is being tried for allegedly obstructing a police officer.
—
John McFadden, a reporter with Northern News Services, was arrested while taking photos of police searching a van in downtown Yellowknife in the early hours of July 5, 2015. His trial began on June 20 after being postponed twice.
This is not McFadden’s first trouble with the RCMP. Last year,CANADALAND reported he had been barred from a press conference and denied media access to officers because of what the RCMP called “unprofessional and disrespectful conduct” and an email that had “a disrespectful tone.” McFadden covered the Yellowknife courts and crime beat for his paper, but was taken off it to prevent a conflict of interest in the wake of the charges.
Last Wednesday, the court heard testimonies from three officers who were present the night of McFadden’s arrest. During the incident, four on-duty police were searching a vehicle with stolen licence plates. The trial adjourned until Sept. 1, which is when McFadden is set to testify.
CANADALAND reached out to McFadden. He declined to comment on the testimony of the officers. But, he told CANADALAND the worst thing about his case is that it has prevented him from covering his beat.
“I can’t cover the courts because I’m before the courts and that’s frustrating,” he said.
Regardless of the outcome of the trial he said hopes his case leads to a less adversarial relationship between RCMP and the media in Yellowknife.
In his testimony, Const. Christopher Hipolito, who was the first to notice McFadden, said he saw him come from the direction of a local bar toward the scene. Hipolito told the court McFadden ended up between six to ten feet of the van before the officer told him to step back. At that point, Hipolito said McFadden became aggravated and told the officer he could stand wherever he wanted before announcing he was going to get his camera.
McFadden returned with his camera and proceeded to take photos of the police search. Const. Christopher Watson said McFadden was upset and yelling, saying he could take pictures if he wanted to, to which Watson responded “absolutely you can take pictures but don’t interfere with our investigation.”
All three officers told the court they believed McFadden was intoxicated, although they offered differing accounts of the extent of his intoxication. Two of the officers said McFadden was swearing throughout their interactions.
According to the officer’s testimony, McFadden took photos and their search attracted a crowd of 15 to 20 people, some of whom were smoking outside a bar adjacent to the van. Watson said McFadden was “getting the crowd jacked up and hostile toward police.” Several of them looked angry and began “chirping” the police in support of McFadden, Hipolito testified.
Photographs taken by McFadden over the course of three minutes and 25 seconds, which were entered as evidence, showed a few people in the vicinity of the van. The officers said some of the crowd was around the corner and not visible in the photos.
Watson claimed he was concerned about the officers’ safety as a result of McFadden’s presence in the “bubble we were working in,” leading the constable to conclude the reporter was obstructing the investigation.
When defence lawyer Peter Harte asked Watson if RCMP could have just ignored McFadden during cross examination, the officer responded by saying “It’s a huge officer safety liability to have an angry man with a camera in the area where you’re trying to work.”
Harte also asked Watson why the officers didn’t use police tape to mark off the scene.
At one point, Watson said he had to stop what he was doing to get McFadden to move out of the middle of the road, where he was taking photographs. After complying with the officer’s request, Watson said McFadden calmed down briefly.
But as Watson continued to search the front of the van, he said he saw McFadden’s camera enter through the side cargo doors, which had been opened by police. It was at this point that Const. Kevin Sales grabbed McFadden and arrested him for obstructing a police officer.
“I had to stop my search to remove him from the opening of the van,” said Sales. When explaining why he placed McFadden under arrest, Sales said McFadden was close enough to the vehicle that he could have tampered with the scene.
After being arrested, McFadden was brought back to cells where he was held for several hours. While he was in custody, Sales went through McFadden’s photos and downloaded the final shot which he said showed that the camera was inside the vehicle.
During their testimonies, the three officers said they knew who McFadden was but that they didn’t immediately recognize him when he showed up.
Watson and Hipolito said they ended up figuring out the reporter that night was McFadden before he was arrested.
Sales told the court he didn’t realize the man he was arresting was McFadden until the reporter told him he wanted to speak to Elenore Sturko, the communications liaison for the RCMP at the time, after he had been handcuffed.
“It was at that point I realized he was media,” said Sales.
McFadden’s lawyer hasn’t completed his cross-examination of Sales, who was the last to testify. It is anticipated that McFadden will testify in his own defence when the trial resumes on Sept. 1.
***
Disclosure: Cody Punter is a former employee of NNSL and is currently doing contract work for them.

CORRECTION: The previous version of this story said, “Several of them looked angry and began “chirping” the police in support of McFadden, Watson testified.” It was Hipolito who used the word “chirping.” Sorry about that, everyone.