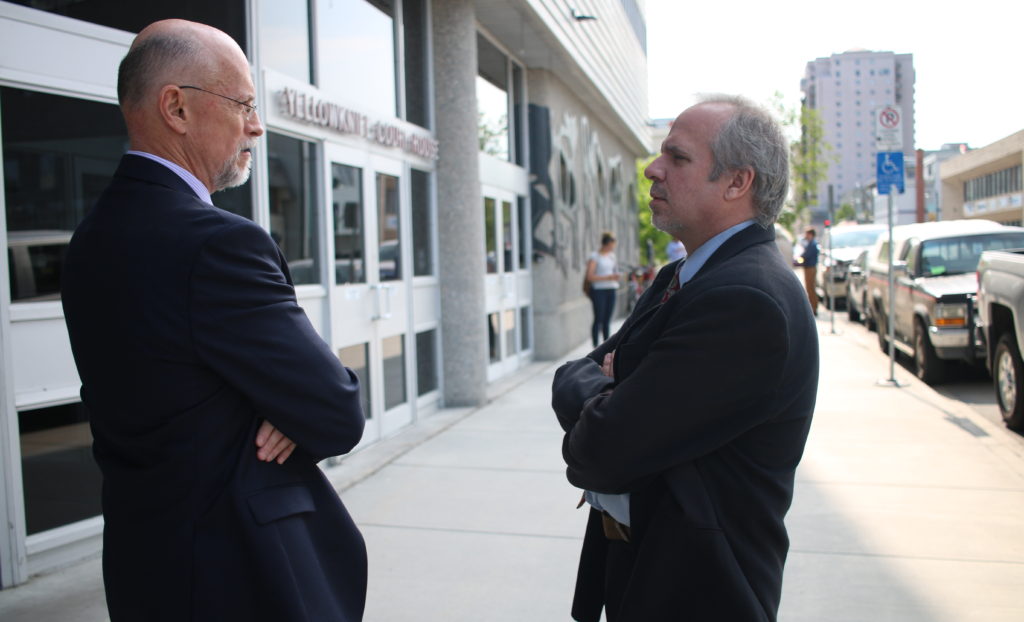 A Yellowknife reporter charged with obstructing justice for taking pictures of a crime scene was acquitted, with the judge calling the testimony of the arresting RCMP officers “exaggerated.”

John McFadden, a 54-year-old reporter with Northern News Services, was arrested in the early hours of July 5, 2015 while taking photos of police searching a van in downtown Yellowknife.

During the trial, RCMP accused McFadden — who came to crime scene after having been in a bar across the street — of being intoxicated and aggressive toward police, with one officer testifying “it’s a huge officer safety liability to have an angry man with a camera in the area where you’re trying to work.”

Judge Garth Malakoe rejected the claims that McFadden was drunk and scolded two of the officers for being “inconsistent” and “obstinate” in their testimonies, in his judgement handed down in territorial court Oct. 21.

“What is concerning…is a certain willingness on the part of two officers to exaggerate to make a point and to evade answering certain questions,” Malakoe said. “It is unfortunate when the court observes these traits in professional witnesses when they are testifying to matters that are not central to the case. It means the court must treat their testimony with caution.”

In a telephone interview McFadden told CANADALAND he was relieved the 15-month ordeal was finally over.

“I feel 110 per cent vindication. I went to court that day with the hope that I would be found not guilty but that even if I was, [I thought] the judge was going to say something about my actions that night that did not reflect well upon me. He did not. What he said is that he believed me,” he said.

McFadden, who wept in the courtroom as the decision was handed down, added that the process took an emotional toll on him.

“I think I can roll with the punches with the best of them but this has been a very trying time and it’s been a very long time,” he said. “I’m not here gloating, I’m not here basking. I’m just trying to get on with my life.”

According to the facts of the case, during the three and a half minutes McFadden was taking pictures he was twice cautioned by RCMP officers to step back from the scene. He complied each time. When one of the officers saw the reporter’s camera lens come close to an open door where the police were searching, McFadden was arrested and charged.

After hearing testimony from the three Mounties, a witness who is a friend of McFadden’s, and McFadden himself, Judge Malakoe said the accused had not been given clear boundaries by police.

“He was told that he could take photographs from the sidewalk and to stay away from the van. There was no police tape outlining these boundaries. He was not given precise instructions as to what ‘stay away’ meant.”

Malakoe concluded the reporter had no intent to obstruct police officers and was simply trying to do his job.

Before he was charged, McFadden had a somewhat contentious relationship with RCMP. In the winter of 2015, they took issue with McFadden reporting that RCMP had failed to notify the public there was a sexual assault suspect at large. Two weeks later another home was broken into and another person was sexually assaulted. The suspect in the original assault was charged for both incidents, leading police to change their policy about notifying the media regarding potential threats to the public. Several months before his arrest, McFadden was also was banned from an RCMP press conference due to an email which police claimed had a “disrespectful tone.”

‘It’s the mindset of the force’

Bruce Valpy, the managing editor of Northern News Services told CANADALAND that the fact McFadden was arrested and charged for doing his job points to a fundamental gap in police training and psychology.

Valpy said if nothing else, the trial had helped clarify boundaries for RCMP and media. However, he added that there was still a ways to go to bring their relationship up to snuff.

“The relationship [between RCMP and media] is dependent on the training they receive and the mindset of the force in general, which is lacking a communication strategy that works for everybody,” he said.

“The problem isn’t the officers or the individuals it’s the mindset of the force.”

Valpy said he hadn’t spoken with RCMP since the decision was handed down, but he suggested such a conversation might be useful.

Yellowknife RCMP declined an interview request from CANADALAND but issued a statement saying: “This verdict is the result of the judicial process, in which we participate and support. We respect the decision of the court.”

While the case has been settled the question remains as to whether or not McFadden will return to his beat covering cops and courts in Yellowknife.

McFadden was reassigned when he was charged in order to avoid a conflict of interest. McFadden said he doesn’t have an axe to grind and that he is keen to get back to doing what he loves best. “I’d like to be optimistic that that relationship with the RCMP can be repaired.”

Valpy said he has yet to to broach the issue with McFadden but that it was just a matter of time until that happened.

“I don’t see any reason why he wouldn’t go back to it.” he said. “As matter of fact I think he’ll be a little more agile when he gets in that type of situation again, because it was an agonizing process.”

Disclosure: Cody Punter is a former employee of Northern News Services and worked alongside John McFadden.