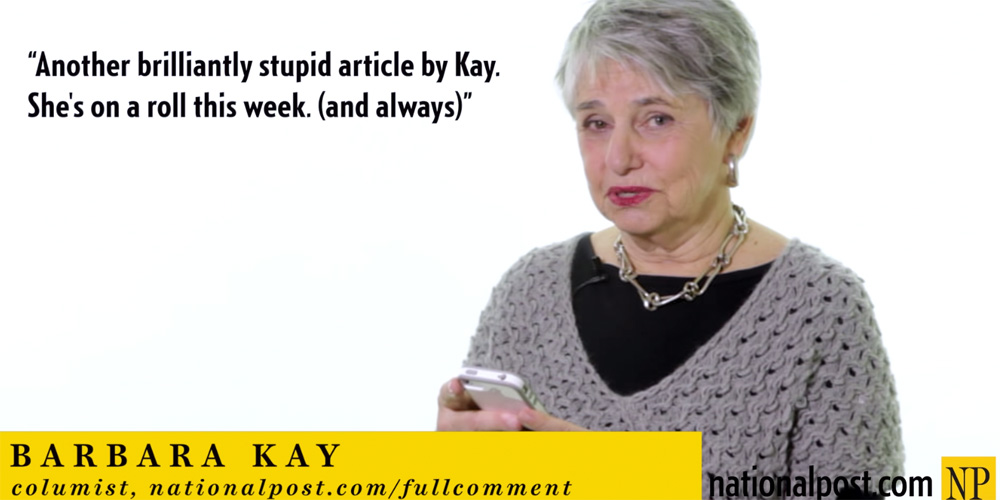 Nearly three years after announcing her departure from the far-right Rebel Media in a Facebook note, Montreal-based commentator Barbara Kay has taken to the same medium to declare that she has “decided to step away” from her longtime weekly column at the National Post.

Kay wrote that she wasn’t comfortable with increased editorial scrutiny at the paper, which she attributed to editors now feeling more accountable to the public.

“As recently as today, my editor assured me that my job was not at risk,” she wrote in her note this afternoon. “But every week seems to deliver new restrictions and anxieties.…Even when my columns appear in the National Post without any kind of delay or objection, I feel a lingering worry that some stray word or phrase will cause an editor to suffer blowback.”

Kay, who once quoted a neo-Nazi to justify an attack on trans identities, appended to her note a new column she filed. In it, she complains that the concept of gender fluidity serves to invite “the whimsically transient, the mentally fragile, the mentally ill, even the opportunistic and sexually predatory into a small forum traditionally reserved for those with irreversible gender dysphoria.”

She was the subject of a 2018 review by the CBC Ombudsman titled “The Limits of Opinion,” after participating in a televised panel in which she described gender dysphoria as an “affliction.”

Not to be a narc, but Barbara Kay is a columnist with a national newspaper and is regularly invited on the public broadcaster's airwaves. Is accusing trans people of "body-snatching kids" consistent with @NationalPost and @CBCNews' editorial standards? pic.twitter.com/4tuVTomIOm

“Many complainants cited a tweet Ms. Kay posted referring to ‘body snatchers’ as a reason to have barred her from the panel,” wrote ombudsman Esther Enkin. “The tweet was published after the panel, and while it might inform who CBC programmers invite to discuss transgender issues in the future, the mandate of this office is to assess the CBC programming.”

Kay’s interests also include championing an author who claims to debunk “the Aboriginal Industry.”

Her first piece appeared in the National Post in mid-December 1998, less than two months after the founding of the paper, of whose editorial board her son Jonathan was already a member.

“Yes, Barbara Kay is my mother,” Jonathan Kay later wrote. “No, I didn’t hire her. Natasha Hassan brought her on as a weekly columnist in 2003, and I inherited her as one of my roster when I became comment editor two years later.”

Hassan is now opinion editor at The Globe and Mail. Jonathan Kay is now an editor at Quillette.

Barbara Kay also contributes to The Post Millennial and The Epoch Times. And two months after publicly cutting ties with The Rebel, she was back to making appearances.

We’ve reached out to her for comment and would be thrilled to update this post if we hear back.