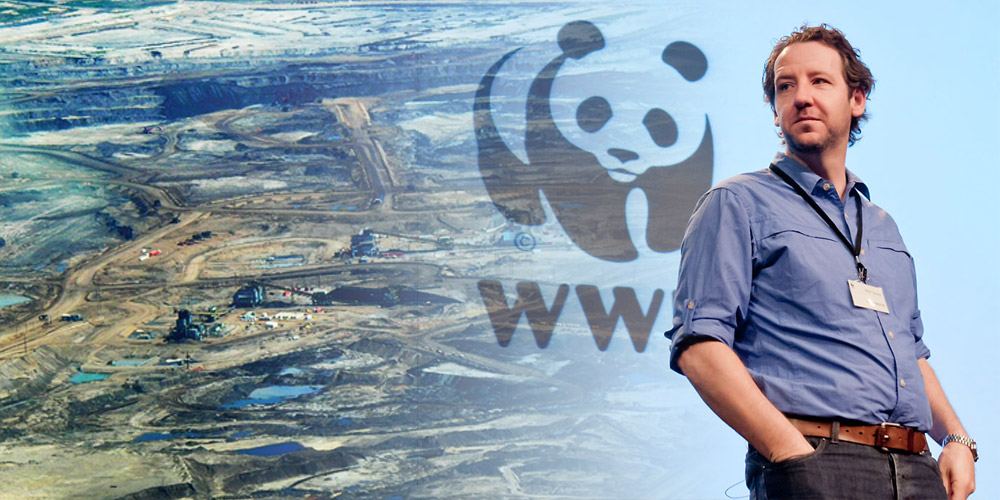 When veteran climate analyst Keith Stewart arrived at his office at the Toronto headquarters of the World Wildlife Fund Canada in the spring of 2010, he was in for a shock. Turning on his computer, he realized that the campaign he had been directing and working on for years — raising the alarm about the unsustainable exploitation of Alberta’s tar sands — had disappeared from the organization’s website.

Stewart hadn’t received any warning, and would not be offered an explanation. Later, he would learn that a decision to shut down the campaign and wipe the website had come from the top of WWF-Canada. The organization’s leadership was abandoning its advocacy on an issue that, thanks in part to their efforts, was finally capturing global attention. When the decision was made, the organization’s president was none other than Gerald Butts, Justin Trudeau’s close friend and primary advisor, who a few years later would become one of the most powerful officials in Canada’s Liberal government.

In his role at WWF-Canada, Butts initially embraced bold climate policies. But before long, he would appear to succumb to limits on action prescribed behind closed doors by corporate power-brokers. It was a striking omen of how he and Trudeau would eventually run the Liberal government — and an instructive parable for those seeking to understand Trudeau’s shift from ostensible climate champion to pipeline-nationalizing oil booster.

When Butts arrived at WWF-Canada in 2008 as its new president and CEO, the first campaigns to slow down the breakneck expansion of the tar sands had just been launched by nearby Indigenous communities, who were suffering from downstream pollution. International media had begun taking notice, publishing reports of hundreds of ducks mired in a Suncor tailings pond.

WWF-Canada was ahead of the curve of most organizations. Stewart, who holds a PhD in environmental policy and teaches at the University of Toronto, oversaw their climate campaigning. They sponsored a tour by journalist and fierce tar sands critic Andrew Nikiforuk. Their website featured commentary from the world’s top climate scientist, James Hansen, who has warned that fully exploiting the Alberta tar sands would spell “game over” for a livable climate. Butts and Trudeau flew to northern British Columbia with funders to visit the Great Bear Rainforest, which would soon be threatened by Enbridge’s proposed Northern Gateway pipeline. In an op-ed in the Toronto Star, Butts didn’t mince words: “From hewers of wood and drawers of water to makers of moonscapes and creators of toxic tailing ponds: what a face for Canada to show the world.” And in 2009, he would sign a joint public statement from several environmental groups calling for the government to “declare a moratorium on expansion of tar sands development and halt further approval of infrastructure that would lock us into using dirty liquid fuels.”

Just before Butts joined the organization, WWF-Canada had also opened an office just outside Edmonton and launched another campaign to try to curb the staggering amount of water that tar sands companies were drawing from the Athabasca River. That campaign was led by Rob Powell, a mild-mannered scientist who had previously worked at an industry-friendly regulatory agency of the Alberta government. “What we were looking for from tar sands companies was mild steps toward sustainability,” he told me over the phone in the spring of 2018. “We wanted to ensure that the water outtakes would not drive the Athabasca River below a level of flow that would be catastrophic. Below that, everything falls apart, killing the fish, leaving enormous ecological destruction.” Though Butts inherited this campaign, Powell says he was enthusiastic about it and had a hunch that the issue would rise in profile. Butts delegated several people to work on it.

While some companies resisted the campaign, others eventually agreed to make changes. The province’s water management improved, and WWF-Canada’s scientific modelling of water flows was heralded as an example for elsewhere in the country. The Toronto head office was delighted, Powell says. He began preparing another campaign, this time to challenge an outlandish exercise in green-washing by tar sands companies. To fulfill their obligation to remediate destroyed land, the industry was proposing to pipe toxic sludge from tailings ponds into giant mining craters, pour fresh water over them, and claim they would become thriving “end-pit lakes.” “It might look like a lake, but it wouldn’t act like one,” Powell says. “It was a horrendous excuse for reclamation.”

But as the notoriety of Alberta’s tar sands grew thanks to public education and campaigns, the mood shifted in some parts of the WWF-Canada headquarters. “It seemed like powerful people were not thrilled that we were working on this,” Powell says. Stewart remembers that staff began hearing from the fundraising department that their tar sands campaigns were hurting donations. “Corporate funders started freaking out,” Stewart recalls. “They’d tell us, ‘I don’t understand what you’re doing. Can we figure this out?’ Big donors weren’t saying straight-out that they were opposed to our work. It was more like, ‘I thought we had a partnership here.’” After all, WWF-Canada had a long history of friendly collaborations with corporations. Those now pushing more aggressive advocacy were beginning to jeopardize a safe brand.

Stewart says he heard that some members of the board of directors grew increasingly anxious. The board was populated by CEOs, corporate lawyers, and bankers, as well as future Liberal cabinet minister Seamus O’Regan. It also included Blake Goldring, a member of the Business Council of Canada, who had previously donated $500,000 to WWF-Canada. He was the CEO of investment firm AGF Management, which advised an Oil Sands Sector Fund worth hundreds of millions of dollars. He would not rejoin the board in 2010, for reasons unknown. (He did not respond to questions about this.) All that remained was for Gerald Butts to exercise his widely-praised skills in reading the tea leaves.

Powell says support for his work from his direct superiors at WWF-Canada suddenly vanished. Every new campaign idea was rejected. “It was rather strange, when you have put a lot of effort in, and you have something to show for it,” he says. “Wiping it from the map seemed a very odd choice.” At the same time, in the spring of 2010, Stewart came into the office to discover that all signs of the tar sands campaign had vanished from the WWF-Canada website. Some staff demanded answers. One never came from Butts, Stewart says, but a director quietly told him: “We’re not doing that anymore. Priorities have shifted. The focus will now be on corporate engagement.”

Stewart says this exemplified a pattern of leadership from Butts. “He would be gung-ho about something, but after talking to Bay Street types and realizing they wouldn’t go for it, he would drop it.” Stewart believes Butts’s commitment to climate action was real and profound. “But he came from a world of politics in which you get the best deal possible given the prevailing balance of power,” he says, “while I come from the world of social movements, where we try to change the balance of power so the necessary becomes possible.” Stewart could understand this strategic difference, but Butts’s latest move was the last straw. He resigned in protest.

Butts tells Canadaland that the shift was a “decision we made with our Board as part of a new five-year strategic plan,” but that “ultimately, as CEO, I was responsible for the decision.”

He emphasized that campaigning on the tar sands “wasn’t a big focus for WWF before I got there,” and that WWF-Canada wanted to prioritize their “big ambition for oceans and arctic conservation, sustainable fisheries recovery, and support for the global network’s important work around the world.”

Yet he made clear it wasn’t simply a question of priorities. “I felt at the time (and still do) that the campaign was divisive in Canada and oversimplified the complex issue of climate change,” he tells Canadaland. “It was outside the core mission of WWF’s science-based advocacy.”

Within a year of the tar sands campaign getting wiped from the WWF-Canada website, Powell received a phone call from Butts. The Edmonton office, Butts told him, would be closed. After the financial crash of 2008, WWF-Canada needed to save money. “I don’t think that explanation held water,” Powell says. “It was years after the crash. And it so happened that a number of people in Toronto were hired afterward. I think for some reason he didn’t believe we should be engaged in what we were doing.”

Butts provided a different explanation to Canadaland. “[The Alberta office] existed primarily to support our lead on our McKenzie River Valley conservation work and was closed when that work concluded. The oil sands work wasn’t being done out of that office, if I remember correctly.”

Not long after, in 2012, Butts gave a talk in Calgary to an oil industry group. He was still president of WWF-Canada, but by now he was juggling frequent work with Justin Trudeau. In line with that drift, it seemed like he was workshopping the new pitch of the Liberal party. The speech was titled “Dog catches car” — an old saw about someone not knowing what to do with power once they’ve secured it. According to the Vancouver Sun, he told the audience that they shouldn’t be too pleased with the government of Stephen Harper, whose belligerent promotion of the oil industry had alienated many Canadians who desired policies addressing the climate crisis. “You guys have gotten everything you’ve ever wanted, and you’re going to find it’s way more difficult to get things done,” he told them. It sounded like the tough-love message of a new confidant: the oil barons would need to smarten up.

Butts soon left WWF-Canada to begin working full-time with the man he evidently believed could become a more effective interlocutor to the oil industry. He wrote a letter to WWF’s members announcing his departure, touting the work they had done on the Arctic, on ocean and freshwater protection, and on climate change. He didn’t mention the tar sands.

Around the same time that the WWF-Canada’s tar sands campaigning was shut down, Butts forged ahead with a very different sort of campaign: a collaboration with Loblaws, Canada’s largest grocer, owned by the billionaire Weston family. Starting in 2009, Loblaws began charging customers five cents for plastic bags in order to reduce their usage in their stores, and gave some of the proceeds to WWF-Canada. (Alexandra Weston, the wife of Loblaw’s CEO Galen Weston Jr., sat on WWF-Canada’s board of directors.) The hype associated with such campaigns is out of proportion to their impact, which is puny compared to just about anything else we might do. Reducing plastic bag usage did little of substance to stop the trashing of the environment — indeed, one could argue that it distracted from the root causes, substituting for the radical measures that are needed. The initiative, however, worked out well for some. It made money for both Loblaws and WWF-Canada (which pocketed $3 million) and bolstered the green credentials of a multi-billion-dollar corporation. And unlike WWF-Canada’s tar sands campaigns, it didn’t threaten the interests of anyone powerful.

The sequence of events that transpired at WWF-Canada was an uncanny harbinger of how Trudeau, with Butts ever-present at his side, would eventually act in power. When the Liberals dealt with corporate giants, they would aim to collaboratively boost both their interests. When reckoning with the impact of the Alberta tar sands, they would do nothing that might cause ripples on Bay Street.

In the span of a few years, Butts would go from bemoaning how a destructive mega-project had tarnished Canada’s reputation, to helping make Trudeau its beguiling new face.

This is an adapted excerpt from Martin Lukacs’s new book, The Trudeau Formula: Seduction and betrayal in an age of discontent, out in bookstores and available online at trudeauformula.com.