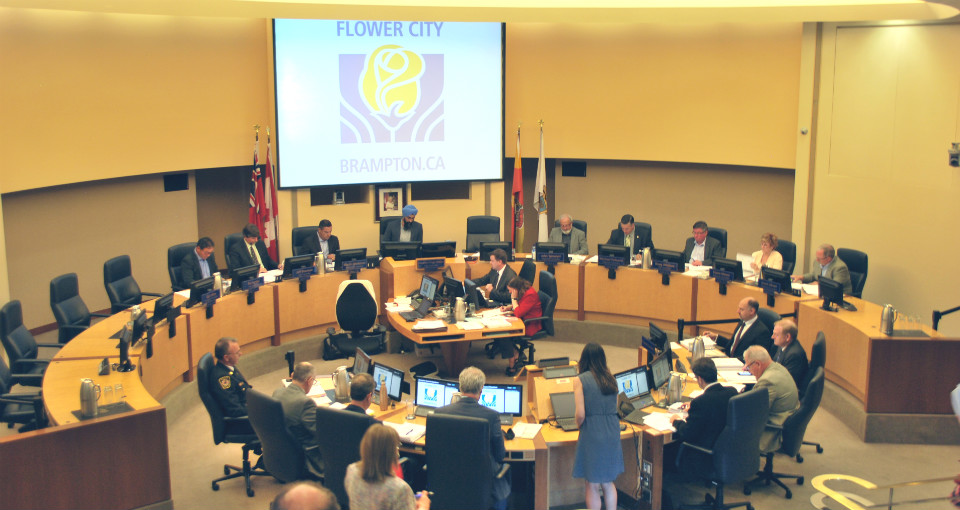 Brampton Councillors Want City To Publish All Inquiries From Journalists

The "bizarre" motion will be voted on Wednesday.
Article By Tom Yun
Share

On Wednesday, June 21st, the city council of Brampton, Ontario, will vote on a motion that would require all email correspondence between journalists and councillors, the mayor, and city staff to be made publicly available online.

The text of the motion is as follows:

Be it resolved, that copies of all media inquiries received by the Mayor, Members of Council and staff be posted to the City website, along with the responses provided; and

Further that, all future Committee of Council and Council agendas include a section for Members of Council to speak publicly on recent media stories which relate to Council decisions or issues that may impact the City of Brampton.

Gael Miles, the regional councillor for Wards 7 and 8, first introduced the motion at the May 31st council meeting, where she distributed copies of an article published in the Brampton Guardian regarding Mayor Linda Jeffrey’s comments on transit in Brampton — a city of 600,000 people located northwest of Toronto — that she claims misrepresents her.

“Up until now, without a motion like this, the press can say or do whatever they want. And quite frankly, I’ve had enough,” Miles said during the meeting. “I’ve had enough of the injustice in the kind of reporting that I see in the Brampton Guardian that really is not fair to the residents of this community.”

Many of her colleagues expressed support for the motion, citing the importance of being “open and transparent.”

“It puts the media on notice. If you’re going to send me a bunch of questions, it’s not like standing in a media scrum where a bunch of other reporters and individuals can hear those questions that are being asked of me,” said Elaine Moore, regional councillor for Wards 1 and 5. “You’re putting them in writing — those are not transparent to the public.”

But Gurpreet Dhillon, city councillor for Wards 9 and 10, compared the motion to “Donald Trump’s war against the media” and suggested that councillors upset with media coverage could utilize other means to air their grievances, including through social media, email lists, personal websites, and town halls.

“If you don’t like an article, there’s many other ways to get your own message out, but to force me to put my inquiries on to the website — it’s absurd.”

Such sentiments were also echoed by regional councillor Martin Medeiros (Wards 3 and 4), who called the motion “a bizarre approach” and expressed concerns over the usage of City resources to publish media responses, something he called political in nature.

Due to a medical procedure, Miles was not present for last Wednesday’s council meeting at which her motion was set to be debated, so councillors voted to refer it to the June 21st meeting. A confidential staff report outlining the practical implications of the motion was not made public and was presented to the council at an in camera session.

The editorial boards of the Brampton Guardian and the Toronto Star, both owned by the same parent company, have published editorials slamming the motion, calling it “bullying.” In addition, the Guardian’s editor-in-chief told CBC News that none of the paper’s articles have attracted complaints.

Jeffrey Dvorkin, the director of the journalism program at the University of Toronto Scarborough Campus, believes that the motion, if enacted, would result in City officials using personal email accounts to communicate with reporters. He calls the motion an attempt at “shutting down conversations” between City officials and journalists.

Over the past two months, the Brampton Guardian has reported on a number of controversies involving Brampton City Council. In April 2017, the paper reported that Miles encouraged the purchase of the Riverstone Golf and Country Club, a “money-losing” private golf course owned by a developer that had previously made significant donations to her campaign and community organizations.

In addition, an audit report from June 7th revealed that a total of $1.25 million in secretive discretionary bonuses were paid to 167 non-unionized employees. Many of these payments, called Outside Policy Requests, occurred during Councillor Miles’s tenure as budget chair.

Dvorkin suggests that Miles’s motion would likely be illegal and speculated that the courts could overturn it “probably in a matter of a month.”

“A media organization could simply go to court and say, ‘What they’re asking for is a journalist’s work product,’ which is confidential and can only be shared with the agreement [of] the parties involved, not be forcibly revealed by a third party. Work product is highly respected by media organizations and the courts. This is something that is a long tradition of journalistic independence.”

Dvorkin points to the Accurate News and Information Act, which was passed by the Alberta Legislature in 1937 and would have required newspapers to publish the government’s response to criticism if requested. The Supreme Court struck down the legislation the following year for being beyond the powers of the Alberta government.

“There is [precedent] for restricting the ability of governments to restrict the media, and I think that may be something that the councillor in Brampton may not be aware of.”

On Twitter and Facebook, Miles put out an offer to release her correspondence with the media on questions regarding the Outside Policy Requests to anyone who requests them.

“If a journalist thinks that every email they send to an elected official is going to end up presented in the record of council,” Dvorkin says, “I doubt that they’re going to be in touch with them frequently, if at all, in the future. I think this is really about chilling contact between journalists and elected officials and civil servants.”