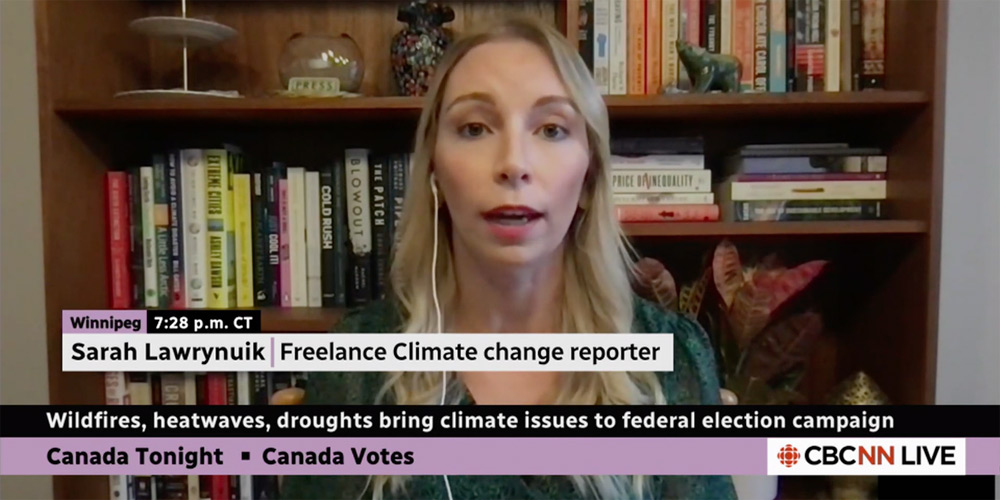 Why CANADALAND has had almost no climate coverage

Sarah Lawrynuik would like Jesse Brown to care about covering the climate crisis.

“Think about if I came to you with a story pitch, and I promised that this story promised to impact every person in the world,” the new senior producer of CANADALAND tells the host on this week’s episode. “Hundreds of thousands of people would die every single year if we ignore it. Big corporations have been deliberately hiding information from the public and manipulating the media to hide the story, and governments for decades have chosen to side with industry and regional interests to ignore the burgeoning problem. And now we have a chance to make it not so bad. This story has fucking everything: corruption, abuse of power, social justice issues, and at the core of it, action as a matter of morality — about who we are as human beings and if we actually care about one another.”

Part of the problem, he explains, is that “I have been hearing that story my entire life. And you know, the thing about news is that it kind of has to be news.”

For years, CANADALAND’s listeners have requested coverage of climate change, or at least coverage of Canadian media’s dismal record on the issue. But Jesse, who is also Canadaland’s publisher, has been reluctant.

So to mark the end of COP26, Sarah — a journalist who’s specialized in climate issues and just this year earned an MSc in the subject — sits down with Jesse to explore this reluctance and to try to change his mind:

To do so, she walks him through some of what she’s learned in the past number of years, through both reporting and schooling, to guide him “past those mental blocks that we have.”

“I want to show you,” she says, “that this is the coolest time to be engaged in this story and that, in my view, this is the most interesting point in human history — because we’ve never faced a problem like this.”

Here’s a condensed and edited excerpt from their terrifically rich conversation:

Sarah: Psychology helps us to understand why people are so bad at preparing for far-off threats with no clear arrival date. But when it comes to governments, they’re supposed to make the tough decisions in the public interest when individuals aren’t designed to make the changes needed. The pandemic offers a good example of how often that falls apart, because here’s a clip from Barack Obama circa 2014:

Obama: There may, and likely will, come a time in which we have both an airborne disease that is deadly, and in order for us to deal with that effectively, we have to put in place an infrastructure, not just here at home, but globally, that allows us to see it quickly, isolate it quickly, respond to it quickly.…How do you argue with that?

Jesse: I like how we’ve moved from one intractable, permanent nightmare to the next, by way of illustration. But it actually makes me interested to go back and see, did anybody cover that? Was there any really big journalistic take saying, “There’s gonna be a huge pandemic, and the world isn’t ready for it”? My guess is that probably somebody did write that story.

Sarah: Vox did. I would guess that most editors were like, “Hey, that story is probably pretty boring.”

Jesse: But did journalism win or fail? What is that an example of?

Sarah: It’s definitely a failure, and it doesn’t fill me with a lot of hope. What it does fill me with is this thirst for accountability, because we’re the media. Governments are supposed to be informed and rise above the psychological tendencies of individuals, and they’re supposed to do what’s right and they’re supposed to fill in where we fail. And they didn’t do that. But we also failed to hold them accountable, because of just how long this problem has been known. Environment Canada put climate change on the government’s top priority list in 1983. And so is it any wonder that teenagers are in the streets now, outraged that we haven’t managed to fix this problem yet? This is the biggest case of government negligence that has ever happened. This isn’t individually a Liberal or Conservative problem — they knew, and they didn’t do anything.

Jesse: Which is a hard thing for Canadian news outlets to turn into a news story, to publish a screed against a government of the day for doing what every single government has always done. That, I think, would be a tough story for Canadian outlets to get excited about.

Sarah: It’s true, they all have failed. But the thing is that American outlets are way further ahead on documenting the inaction and holding powers to account. And it’s not just the government — it’s also oil and gas companies. These companies actually went in and preyed on the lack of understanding and our industry’s tendency to do the “two sides” of everything. They’ve used that to manipulate the media and to manipulate the public since the late 1970s. Scientists at Exxon were among the first to understand climate-change science and its implications. And that was in 1977. Here in Canada, we are still barely doing rudimentary climate-change coverage well, so I don’t know how we get to the point where we’re actually offering accountability, as far as how we got here and whose failures it was and who knowingly turned a blind eye.

Jesse: I like this a bit more, editorially, because it involves naming and shaming individuals and ruining people who’ve made terrible choices. You’re getting closer to stuff that is within our wheelhouse, if it’s about executives who knew stuff and then willingly misled the public, and governments that have aided and abetted that.

Sarah: This needs to be something that doesn’t just come up when we have record-breaking wildfires and droughts and heat waves, like we did this summer. That’s the only time that we really get to climate-change coverage, or when COP26 happens to be on.

Top screencap from Sarah’s appearance on CBC News Network’s Canada Tonight this past August. Now a senior producer at Canadaland, she will remain based in Winnipeg.