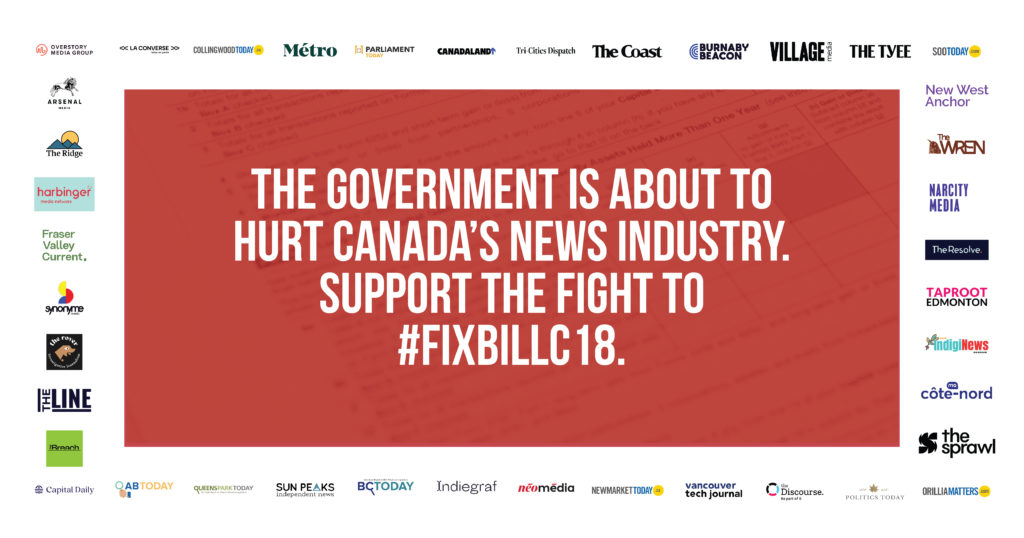 Canada’s Online News Act must be transparent, fair, and include news innovators

When the Liberal government announced its intention to support Canada’s news industry, the reasons given were to sustain local journalism, support innovation in news, and ensure diversity in the news industry. Bill C-18, the Online News Act currently before Parliament, guarantees none of these things.

Four key changes are needed if Canada is to have the vibrant journalism citizens need for a healthy democracy.

We are a coalition of independent Canadian news publishers, pushing for amendments to C-18 to ensure the bill lives up to its promise to strengthen Canadian journalism. We represent over 100 outlets serving communities coast to coast to coast and employing over one thousand journalists. Taken together, our readers and listeners number in the many millions. Many of us have risked personal capital, fundraised from our communities, and built newsrooms from scratch to reach underserved audiences, many at the local level.

Collectively, we represent Canada’s most innovative digital news media, local news outlets, both French and English language media, and BIPOC-led news media — we are the innovative news organizations that are rebuilding the local news ecosystem. The Online News Act represents an opportunity to accelerate this innovation and progress.

We have come together to ask for basic fairness in Bill C-18.

The centrepiece of Bill C-18 is a funding model aimed at mandating large web platforms like Facebook and Google to compensate Canadian news organizations for posting content on their platforms. Unfortunately, as it is currently structured, Bill C-18 does not specifically direct funding towards supporting the critical work of journalists. The bill also lacks robust transparency mechanisms and, most importantly, it risks leaving out small, medium size and independent publishers.

Even before it was tabled, Bill C-18 has resulted in winners and losers in the news industry. There have been a series of secret, backroom deals between Big Tech and the largest newspapers in Canada, along with a handful of small- to medium-sized publishers. An unintended but likely consequence of Bill C-18 as currently structured may be to cement these inequities and this secrecy, which threatens the public’s already-frayed trust in journalism.

To be clear, we support the goal of creating a sustainable news industry. It is not too late for the current legislation to address the needs of the Canadian news media ecosystem. We want it to be amended to ensure the following:

While we recognize the reality of the wider news crisis, our organizations represent rays of hope, and are proving that there is a future for a dynamic, inclusive news ecosystem in Canada.

Bill C-18 is modeled after Australia’s News Media Bargaining Code. It must not repeat the mistakes of that legislation. In Australia, an estimated 90 per cent of negotiated revenues flowed to the three largest media companies.

We encourage the government to revisit and improve Bill C-18.

As small, medium size, and independent news publishers, this new legislation is too big, and too important, to fumble. Bill C-18 will have a massive impact on the future of journalism and news in Canada.

Let’s make sure we get it right.

News publishers: to add your org to this list, please complete this form.