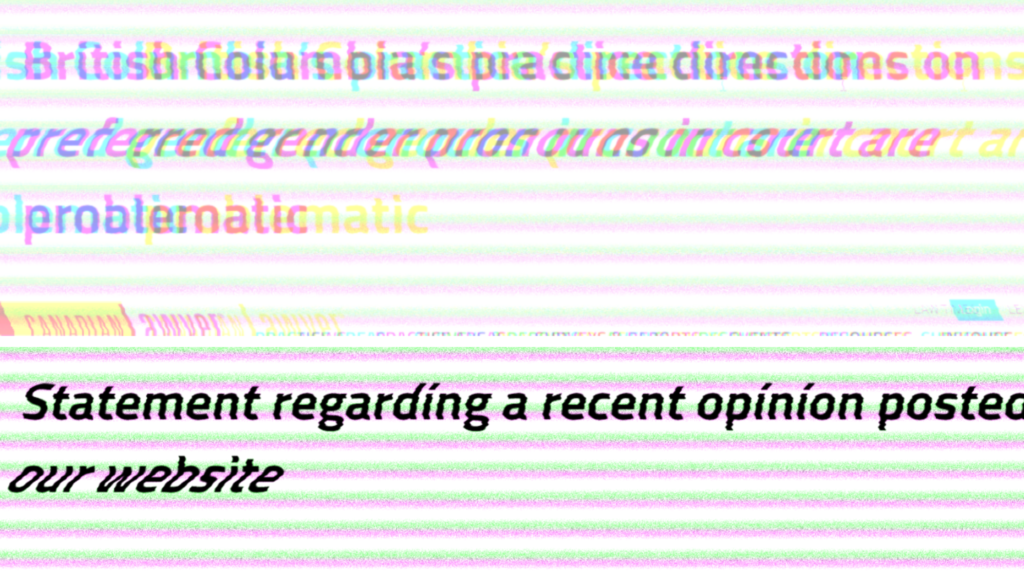 Article's date was changed before it was deleted.
News Brief By Danielle Paradis
Share

An article published by Canadian Lawyer magazine drew the ire of the legal community this weekend for what is being called an intellectually dishonest and bigoted argument.

The opinion piece was written by Shahdin Farsai, a commercial litigation lawyer. In it, Farsai argued that a directive by the BC Supreme and Provincial courts, requiring lawyers and other parties to state their preferred gender pronouns at the beginning of court proceedings, was “compelled speech.”

The article referenced two cases to highlight Farsai’s concerns. The first was a recent case before the BC Supreme Court in which a mother tried to prevent her 17-year-old from having surgery to remove their breasts. Farsai misgenders the 17-year-old multiple times. The second case was from the United Kingdom, where a judge is reported to have described the complainant´s use of non-preferred pronouns as “bad grace” when explaining his reasons for not awarding her financial compensation for an assault. Farsai could not immediately be reached for comment.

This piece in @CanLawMag is repulsive and thinly veiled bigotry. It is also intellectually dishonest and poorly written. This has nothing to do with freedom of speech. It is trash. https://t.co/R6dpZqzdyq

Farsai stated, “I see these practice directions as problematic for three central reasons. They are potentially compelled speech in court, a breach of privacy rights, and damage the perception of judicial impartiality.”

Spratt says that framing this discussion of a practice direction as an issue of compelled speech is intellectually dishonest when the directive’s focus is courtroom decorum. Other practice directions that were issued since the courts moved online due to COVID-19 state that lawyers don’t have to wear their traditional gowns or stand when making court submissions.

“I’ve seen judges direct people to use the witness’s last name, use their proper title, especially when there’s an insinuation that you are using certain words to be disrespectful and to try to intimidate. So judges have that sort of power to direct the process in their courtroom. A judge isn’t going to let you call a witness an asshole. A judge isn’t going to let you disparage anyone else in court or treat them in a disrespectful manner,” says Spratt in an interview to Canadaland.

Spratt says that, despite the criticism, the practice direction has nothing to do with freedom of speech. “Not only is it transphobic and bigoted, but it is also not very intellectually rigorous and so that has been one of the concerns that has been circulating in the legal community — concerns about the tenor and quality of the opinion.”

“The UK case, from a different jurisdiction in a completely different context, does very little to support any argument that she’s making. I think this piece has all the typical buzzwords and lazy thinking that these sorts of arguments typically do,” says Spratt.

Strangely, prior to its removal but after coming under scrutiny online, the publication date on the article was changed from February 5, 2021, to October 1, 2020, in what may have been an attempt to de-emphasize it on the website. The statement posted reads: “An article posted on our website titled “British Columbia’s practice directions on preferred gender pronouns in court are problematic” has been removed. The article did not reflect the views of Canadian Lawyer Magazine, Key Media and its related entities.

Screenshot of the original article posting date of February 5, 2021

Civil rights lawyer Frances Mahon, who penned a letter to Canadian Lawyer expressing concern over the opinion piece said to Canadaland, “I am very pleased by the outpouring of support for the trans and non-binary communities by the legal profession, and look forward to hearing from the editors of Canadian Lawyer about how they will ensure their future publications are both legally accurate and respectful of human rights.” The petition currently has over 125 signatures.

I sent the editors of @CanLawMag our letter, signed by over 60 human rights lawyers, professors, benchers and other legal luminaries. I’ll keep adding folks to the list & update the letter as signatures come in. Send me a dm if you want to join in! #canadianlawyerbocott https://t.co/H36eVVMQEK

Canadian Lawyer editor-in-chief Tim Wilbur, could not be reached for comment.

Correction (February 7, 2020, at 8:54 p.m. EST): An earlier version of this article misidentified Shahdin Farsai’s law firm as Miller Thompson LLP. According to her LinkedIn profile, Farsai left Miller Thompson in December and is currently an associate at Sabey Rule LLP in Kelowna, BC.