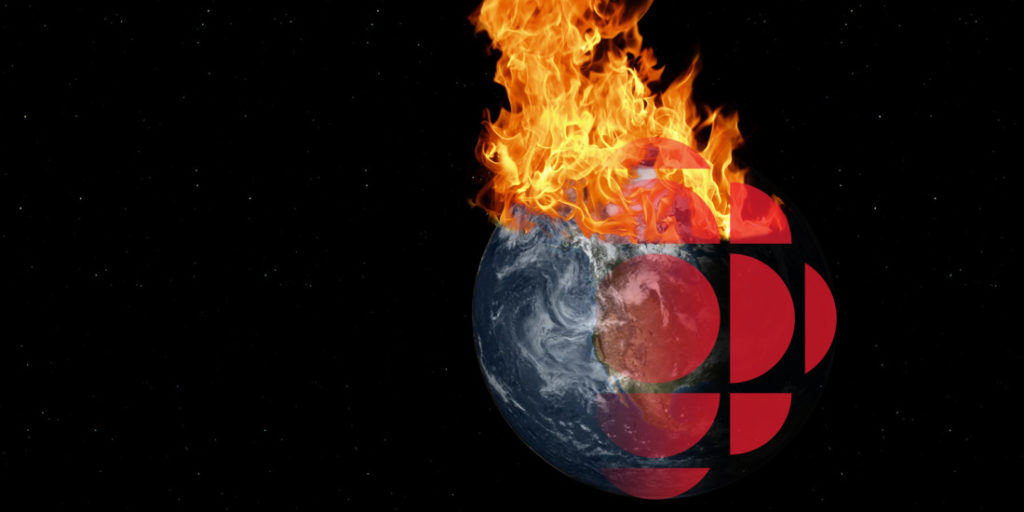 On Friday, May 17, The Guardian made headlines worldwide for making a few simple changes to its style guide.

The British daily newspaper announced that its staff would no longer be using the term “climate change” to describe the global rise of temperatures and disruption to standard weather patterns due to human causes. Instead, they’ve begun describing this process as a “climate emergency, crisis, or breakdown.” They also swapped out the terms “global warming” and “climate skeptic” for “global heating” and “climate (science) denier,” respectively. The initial phrases are not banned, notably, but the style guide instructs staff to “think twice before using them.”

“We want to ensure that we are being scientifically precise, while also communicating clearly with readers on this very important issue,” Guardian editor-in-chief Katharine Viner said in a story on the change.

Within just weeks of The Guardian’s style changes, several major Canadian media outlets have opted to go the same route.

The CBC was among them. Senior management at the national public broadcaster reportedly sent a memo to staff telling them that the change in style at the British newspaper had “prompted requests to review the language [it uses] in global warming coverage.” The memo gave staff permission to use the terms “climate crisis” and “climate emergency” in lieu of “climate change” (while still noting that the lattermost is the default term, preferred over the former two).

“Our internal language guide is a living document and is continuously updated as situations warrant,” Paul Hambleton, the director of Journalistic Standards and Public Accountability for CBC News tells Canadaland in an email. “We recognize that ‘climate crisis’ and ‘climate emergency’ are increasingly common expressions in debates over what to do about global warming. ‘Climate change’ and ‘global warming’ offer a neutral starting point for that debate, but as with all our journalistic decisions, context matters.”

National Observer, a Vancouver-based independent news site known for in-depth reporting, tells Canadaland they made the same style changes following The Guardian’s announcement. To Mike De Souza, managing editor at the Observer, the move is simply “a matter of finding better ways to communicate the reality of the situation to readers.”

“We want to make sure we’re acting responsibly, communicating completely and adequately to readers what the reality is about situations that they are seeing,” De Souza says. “A part of our jobs as responsible journalists is to take these steps.”

Vice Media also opted to make the same style changes not long before The Guardian’s announcement, which, according to Hilary Beaumont, formerly a reporter at Vice News, apply across the company.

While Beaumont notes that “Vice has been progressive and science-based on this issue for as long as [she] can remember,” and she personally always felt free to report on the climate crisis as an urgent matter, she feels the change is a necessary step.

“We only have 11 years to act, so we need to use accurate and up-to-date terms that communicate that urgency”

“According to the latest UN IPCC report, we only have 11 years to act to limit the worst effects of the crisis, so we need to use accurate and up-to-date terms that communicate that urgency to readers and policy-makers,” Beaumont says. The report, she notes, “made it clearer than ever that the world is experiencing a climate emergency.”

But while some Canadian outlets are endorsing The Guardian’s language changes, others remain less inclined to move in this direction. The Canadian Press, which serves not only as a national newswire but as the provider of a national style guide, is “not currently contemplating any changes” along the lines of The Guardian’s, but may one day “examine whether to add some specific advice on dealing with” climate change reporting, according to James McCarten, the editor of the CP stylebook.

McCarten notes, however, that CP would not disendorse the use of terms like “climate crisis” or “climate denier” should they be the “most accurate terms that can be used in the context of a given story.”

McCarten advises using a diversity of language to describe global heating throughout a piece, a strategy that he says will help writers avoid inadvertently editorializing on the climate debate. Remaining “neutral” is a concern that staff at the CBC also share; it’s for this reason that the broadcaster is not extending its style changes to include use of the term “climate denier” in lieu of “climate skeptic.”

“At CBC News, we are also mindful of the line that shouldn’t be crossed here in our reporting — namely, adopting language that amounts to ‘advocacy journalism,’” Hambleton says. “Neutrality is an important principle in our journalism.”

Yet, to other environmental reporters and outlets, positioning climate change as a matter that’s contestable goes against journalistic principles of truth and objectivity. The newly updated Vice style guide, for example, states, “Climate change is not hypothetical; it is a scientific reality … people who do not believe in climate change are ‘climate science deniers.’” A 2015 version of the guide similarly said, “Being fair does not mean engaging in false equivalencies; there is no need to interview climate change deniers for a story on climate change.”

A little over a month after The Guardian made its style changes, the Canadian House of Commons passed a motion declaring a “national climate emergency.” The motion called on the House to recognize that “climate change is a real and urgent crisis, driven by human activity.” While the motion’s passing was swiftly followed by the approval of an expansion of the Trans Mountain Pipeline, which will increase Alberta oil production and the release of greenhouse gases into the atmosphere, it’s worth noting that the language mirrors some of the style changes various Canadian news outlets have now made. While not every outlet in the country has hopped on this bandwagon, the use of terms like “crisis” and “emergency” from government leaders may embolden a growing number of journalists to do the same – especially those whose employers may not explicitly endorse the language in their style codes.

And lessons on the use of these terms will soon be reaching Canadian post-secondary institutions as well. Dr. Diane Dechief, faculty lecturer on scientific and technical writing at McGill University, says she plans to incorporate a lesson on The Guardian’s style updates into her undergraduate and graduate-level courses on communicating science (which touch both on science journalism and academic science writing).

“It’s super important for us to harness the words or get power out of our language to make the kinds of social change that we need to be seeing,” Dechief says.

Dechief notes that there are several elements of a word that can affect how readers interpret them, including their “sound,” “connotation,” or personal history with the word.

The term “global warming,” for example, holds comforting connotations, while the term “heating” evokes a more in-depth visual of rising temperatures. “We are globally heating now,” Dechief says. “It’s not something warm and comfortable. ‘Global warming’ didn’t seem so hazardous or problematic.”

In the same vein, the term “climate change” holds “neutral connotations,” Dechief says. “Changes happen all the time. But something like ‘climate crisis’ is like, yes, a lot of people are anxious and losing sleep, it truly is a crisis.”

The same is true for the term “climate emergency.”

“If 10,000 people or more are being evacuated from a number of cities across northern Alberta, that is clearly an emergency,” De Souza says. “If thousands of people are being forced out of their homes in Ontario, Quebec, and New Brunswick because of severe flooding, that is an emergency. So we’re just using appropriate words to explain what is happening in Canada right now and around the world.”

Albeit controversial, many who’ve made the change also say using the term “climate denier” is effective in positioning climate change as true, real, and factually correct, rather than as something dubious and worth second-guessing, as the term “climate skeptic” does. Dechief also says the phrase holds more “abrupt” connotations, which make it more effective for underscoring the danger in climate-change disbelief, though she acknowledges it may alienate factions of readership.

“Somebody who’s skeptical, it’s sort of like, ‘They’re a real thinker, they’re giving it some time,’ whereas to deny it is sort of like a blind ignorance,” she says. “I think it’s a good change, but for some people they might be like, ‘I’m just skeptical, I’m not an ignorant person.’ So it could be a turn-off for some people.”

While word choice is one effective way to convey the gravity of climate change, some writers are calling for even broader changes in the way Canadian media covers the topic. Among them is Sean Holman, a former syndicated columnist and journalism professor at Mount Royal University, who recently published a call to action for Canadian media to “start reporting climate change as an emergency” in the Vancouver-based independent news outlet The Tyee.

The letter cites several examples in which Holman feels major national news outlets failed to adequately report on the importance of the climate crisis — including on May 6, when the United Nations released a report asserting that approximately one million species are at risk of extinction due to anthropogenic climate change. The report’s publishing happened to fall on the same day the royal baby was born, and the majority of Canadian English-language daily publishers chose to give prominence to the latter story over the former. Holman’s letter also lays out some strategies for Canadian news outlets to employ when covering climate change.

“This isn’t about activism. This is simply about journalism.”

“What it really comes down to is, more than anything else, simply asking journalists to do their jobs,” Holman says. “Nothing that I’ve actually outlined in the letter is inconsistent with how we should be functioning in newsrooms on a day-to-day basis. This isn’t about activism. This is simply about journalism.”

Word choice is just one tool of many that journalists can wield in maximizing the impact of their work for audiences. Both Beaumont and De Souza say they employ other tactics in their writing to underscore the importance of the climate crisis for readers.

For Beaumont, it’s citing scientific reports on the urgency of global heating and amplifying the voices of those most affected by it.

These voices “can best speak to the reality on the ground,” she says. “I’ve quoted teens who are experiencing heavy smoke from wildfires in BC or are worried about the permafrost thawing beneath their homes in the North … everything I write on this topic is aimed at communicating the science, the urgency, the government response, and who is directly affected.”

And for De Souza, it’s providing in-depth background about the implications of climate-crisis-related news or political events.

“With the full context of the scientific reality and economic reality of what these policies mean, and what it means when politicians take certain positions or make certain statements about them, we want to make sure that those statements are accompanied by the appropriate context,” De Souza says.

Corrections (7/19/19 at 1:30 p.m. EDT): This piece originally said that Vice made recent changes to its style guide “following The Guardian’s announcement.” Vice’s changes, however, narrowly preceded The Guardian’s. Further, Sean Holman’s title has been amended to reflect his current position as an associate professor at Calgary’s Mount Royal University.