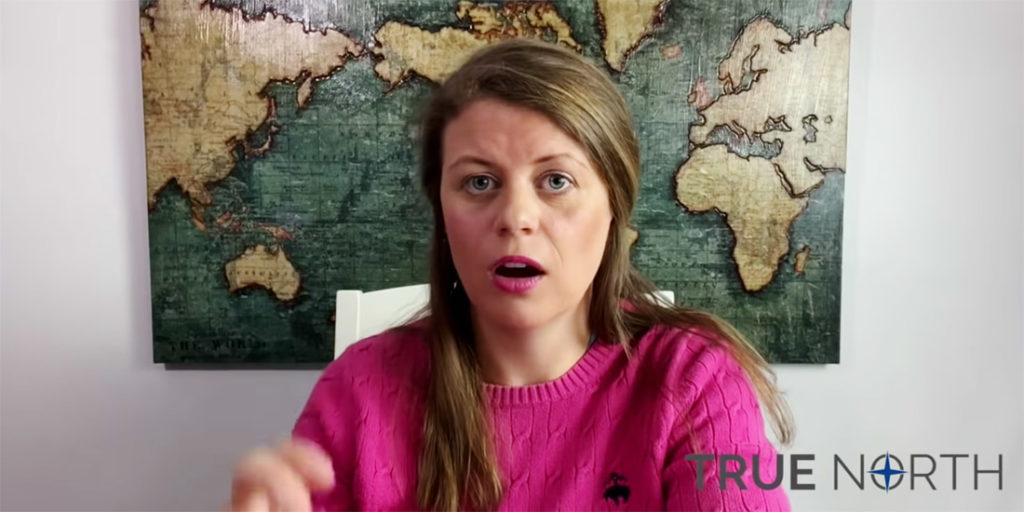 I Called Out A Sun Columnist For Spreading A COVID-19 Conspiracy Theory, And She Did Not Take It Well

Saturday began as a day like any other for me: I woke up, poured myself a pot of coffee, and opened up Twitter to discover that I was a propagandist for the Chinese Communist government.

It turned out that Toronto Sun scribe Candice Malcolm’s weekly column was, in part, about me.

“Don’t let anyone stop you from asking tough questions about China,” the headline read, and I was one of those supposedly standing in the way of her quest for Sino-justice.

Malcolm wrote that, in January, she had taken to her podcast and “raised questions” about “the link between the new coronavirus and China’s lone biosafety level-4 laboratory,” but “as has become a sad sign of our times, agenda-driven journalists quickly attempted to discredit these questions.

“Canadian freelance writer Justin Ling wrote a post for Foreign Policy regurgitating Chinese propaganda that implied I and others were spreading misinformation and conspiracy theories by bringing up these questions.”

The column, which ran across the country, is part of Malcolm’s attempt to rewrite her own corner of history, to make herself look like the Nostradamus of the Sun. Judging by some of the emails in my inbox, people are buying it.

Malcolm wrote that “the theory that COVID-19 leaked from a Chinese laboratory is looking more credible with each passing day.”

Which is, to begin with, not really accurate. But, for Malcolm, an occasional Rebel Media guest and former contributor, the theory has to be true. She, after all, predicted it! Or so she implies in the column.

On the January 27 edition of her YouTube show, Malcolm asked her 4,901 viewers: “Why isn’t the mainstream media talking about the origin of this deadly virus? Could it be linked to China’s biological warfare program?”

She later introduces the story by saying she “noticed this story in The Washington Times over the weekend.”

First off: Why is Candice Malcolm reading The Washington Times? Many have a habit for confusing the Times with the conservative-but-still-reputable Washington Examiner. They are very different. The Times has a long history of running junk race science and publishing literal white-supremacist writers, is virulently Islamophobic, has run stories contributing to the Seth Rich conspiracy theory, and was a major proponent of the Barack Obama birther movement.

The story Malcolm referred to reported that COVID-19 may have originated from a “covert biological weapons program,” citing an “Israeli biological warfare analyst.”

Reading the whole story, it is immediately clear that the only evidence for this theory was a very vague quote from that analyst, Dany Shoham. (The full quote: “Certain laboratories in the institute have probably been engaged, in terms of research and development, in Chinese [biological weapons], at least collaterally, yet not as a principal facility of the Chinese BW alignment.”)

Malcolm read out an excerpt from the story, adding “we don’t know anything, and I’m not going to speculate, but I’m just saying that, you know, an expert who knows what he’s talking about is linking this.”

That sort of speculation is not helpful, it’s dangerous. It is not asking hard-hitting questions in the name of the truth, it’s being duped by a conspiracy rag and repeating it verbatim. Even the Times later appended an editor’s note to its story, conceding that COVID-19 “does not show signs of having been manufactured or purposefully manipulated in a lab.”

Around then, I wrote a piece for Foreign Policy, speaking to actual epidemiologists, and debunking the claim that COVID-19 was a lab-made bioweapon. I cited Malcolm’s bonkers YouTube show, and fellow Sun columnist Tarek Fatah’s sharing of an even more absurd conspiracy theory, as evidence that quasi-mainstream figures were spreading misinformation. I even did a followup when the theory was amplified by noted conspiracy- and Russian-propaganda-peddling website ZeroHedge.

Did China steal the #CoronaVirusCanada from Canada and Weaponize It? | Zero Hedge https://t.co/c7bQOdbJmB

The nugget of truth in the theory is that there is, in fact, a highly-secure government lab in Wuhan which handles highly infectious viruses, like Ebola and some strains of coronavirus.

It is not, however, a military lab, nor does it research germ warfare. The lab works to prevent and cure infectious diseases — we can say this pretty confidently because it works with an equivalent lab in Canada, and American health officials have toured the lab on multiple occasions. China, undoubtedly, researches biological weapons, but it would not allow American teams into such a site.

In recent weeks, it has become clear that the lab was cited for lax security standards as recently as two years ago. Those revelations appear to have sparked interest from the White House.

Last week, Fox News wrote that “there is increasing confidence that the COVID-19 outbreak likely originated in a Wuhan laboratory, though not as a bioweapon but as part of China’s attempt to demonstrate that its efforts to identify and combat viruses are equal to or greater than the capabilities of the United States.”

Despite that apparent confidence level, Fox didn’t actually cite any evidence for the theory, simply attributing it to “multiple sources who have been briefed on the details of early actions by China’s government and seen relevant materials.” The story does quote U.S. General Mark Milley, Chairman of the Joint Chiefs of Staff, who when asked about the possibility of the virus beginning in a Chinese lab and maybe having been released accidentally, said, “The weight of evidence seems to indicate natural [origin].” A full-scale investigation has since been ordered.

Peer-reviewed research, published in the journal Nature, has pretty definitively concluded that COVID-19 “is not a laboratory construct or a purposefully manipulated virus.”

This news does not in fact back up Malcolm’s musings from January. Nor have I, or most other journalists working on this story, ruled out the possibility that this was in fact some horrible lab accident.

Nevertheless, Malcolm used her YouTube channel to take a victory lap, declaring that it’s “important that fake-news journalists like Justin Ling at Foreign Policy be called out for their dishonesty.…Justin Ling’s column for Foreign Policy is fake news, and it should be taken down immediately.”

Ling's snarky "reporting" — trying to shame anyone who didn't conform with communist China's official narrative — was quickly debunked. He embarrassingly quoted a Buzzfeed listicle and emphasized that conspiracy theories & discrimination were the real coronavirus concerns.

She then echoed the message from her perch in the Toronto, Ottawa, Winnipeg, Calgary, and Edmonton Suns.

“Anyone who raised questions about the link between the new coronavirus and China’s lone biosafety level-4 laboratory located in the same city were attacked and maligned, including myself,” she wrote.

While Malcolm might want to believe it’s all true, there is still no hard evidence for this theory, let alone the explanation she offered in January.

And, look, this isn’t my first rodeo. Infowars readers giving me the gears for not ascribing to their string-corkboard theories is pretty much a daily occurrence. Most of them, however, do not have a dedicated Saturday column in a national newspaper chain. (While our data is about five years old, the Sun chain used to boast a print circulation of around 250,000 copies on Saturdays.)

I contacted the Sun to write a rebuttal to Malcolm’s claims, but was immediately turned down by editor Anthony Furey.

The Sun has been a vector for this sort of irresponsible misinformation for some time. Underneath it is a pretty serious set of ethical problems.

Malcolm is both a weekend columnist for the Sun and the founder of True North Canada, a think tank and media outlet. It is also a registered charity, under the name True North Centre for Public Policy.

She actually inherited the charitable registration from a group whose stated mission was to provide “support and assistance to UK immigrants” coming to British Columbia, which had brought in just a few hundred dollars in donations a year.

True North now reports an income of $500,000 — more than half coming from donations, and about a third coming as gifts from other registered charities. The source of True North’s income isn’t clear, but PressProgress has reported that $18,000 came from a charity linked to a long-time Conservative donor.

Also on the True North team as a “fellow” is Furey, Malcolm’s editor at the Sun.

That potential conflict aside, the Sun has let its already-lax standards slide for some time.

Trying to undercut trust in the mainstream press in favour of Malcolm’s brand of nonsense, especially at a time of national crisis, is playing with fire. If we don’t keep some level of trust in our institutions right now, the effectiveness of our response to this pandemic is going to be severely weakened.

What’s more, buying into whatever conspiracy theory we find on the internet that matches our worldview is giving a free pass to China’s actual crimes.

Beijing runs a brutal, repressive regime. It has built a rickety empire through exploiting its own workers and keeping them in check through a surveillance regime which they perfected via treatment of religious minorities. It seems fairly obvious now that Beijing has also tried to cover up the early days of the COVID-19 outbreak, potentially robbing the world of crucial time to prepare.

Given all the ways in which we know Xi Jinping’s China is dangerous to its own citizens and others, why would we play fantasy?

After the 2003 SARS outbreak, shoddy Russian research helped spark a conspiracy theory in China that the virus was a biological weapon developed by the Americans. China has tried to do the same thing this time.

There is plenty of blame to be directed at China, both in their response to COVID-19 and on their human rights record. We don’t need to cling to unproven theories to hold them to account — and we certainly don’t need to start inventing them.

Justin Ling is a freelance journalist who writes for everybody.