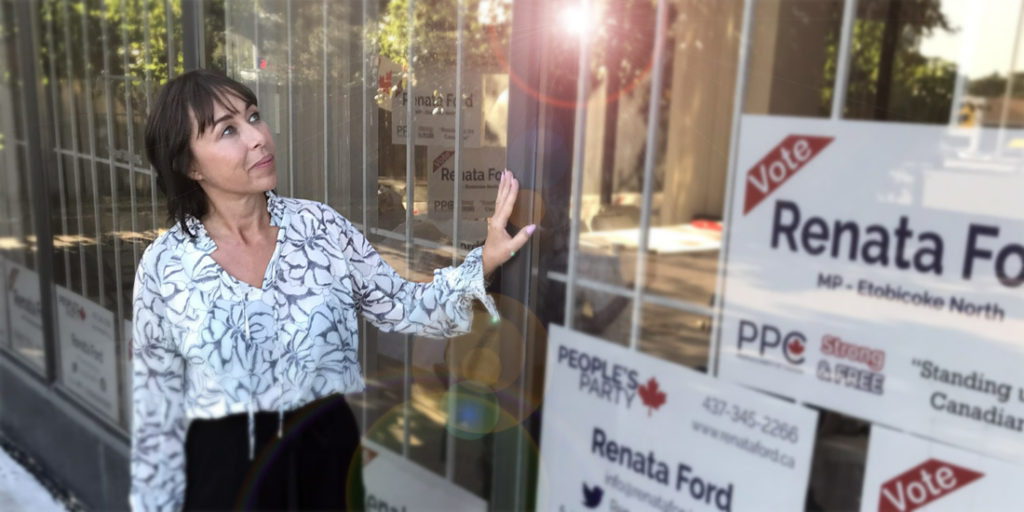 CBC Radio And The Creep Of White Supremacy

Mary Wiens, a reporter for CBC’s Metro Morning, the premier morning radio broadcast in Canada’s biggest city, shadows a candidate running to represent a west Toronto riding in the House of Commons.

Trailing a low-budget campaign for a long-shot party, listeners are taken along for the ride as the candidate knocks on doors, talks to residents, and struggles to assemble lawn signs (those darn metal frames are tricky to get into the poster board).

Residents in the neighbourhood say nice things about the candidate’s deceased husband, also a politician, and Wiens asks sympathetic questions about her campaign and recent turn to politics.

“It’s tough to go door-knocking,” Wiens narrates towards the end of the piece, explaining how face-to-face encounters can sometimes bring up painful memories from the candidate’s past.

All in all, a very on-brand morning-radio segment: gently delivered, from-the-streets reportage, beaming the sounds and voices of one Toronto neighbourhood into the early-morning kitchens and living rooms of the entire metropolis.

Except for one thing. The candidate in the segment is Renata Ford, running in Etobicoke North for the far-right People’s Party of Canada (PPC).

At the start of most weekdays, as I fumble bleary-eyed about the kitchen, putting on the kettle for tea and preparing breakfast, Metro Morning serves as soundtrack. There is some comfort to hearing the same voices, to following the familiar patterns of local and world news, traffic reports, special segments, and studio interviews, accompanied always by the same catchy bits of introductory music. Host Matt Galloway and the Metro Morning crew supply the illusion that is the hallmark of successful radio talk shows: that the disembodied voices travelling over the airwaves are in fact your friends, sitting around your kitchen table, bringing you up to speed on everything that’s happened since you last met.

Metro Morning is not just comfortable. It’s also a barometer for what is considered normal.

To its credit, the show has overwhelmingly used this normalcy-defining power for good, by extending the definitions of who and what is worthy of airtime to include Toronto’s many communities and their cultures. It also has a diverse staff and roster of contributors. Tune in on a given morning and you might catch a segment on Persian pastries, an interview with a transgender comedian, and a report on Black and Indigenous medical students, with hip-hop, disco, or salsa dancing you from one segment to the next.

It is precisely Metro Morning’s comfortable, normal trademark — and its habitually thoughtful use of that status — that makes all the more alarming the appearance of a candidate for a far-right party in an inoffensive human-interest segment. Here, in the soft voice of Wiens and the gentle soundscape of door-knocking and neighbourly conversation, is convincing evidence that the PPC and its xenophobic, anti-immigrant platform has successfully entered the mainstream. It isn’t being normalized; it’s already happened.

It is difficult to exaggerate the softness of the Metro Morning spot, which aired on September 26 and has not been released online. Guest host Farrah Merali introduces the PPC at the beginning of the segment as simply “the brand new party formed by Maxime Bernier,” with no mention of its divisive platform.

The reporter, Wiens, doesn’t bring it up either, instead focusing the piece entirely on Renata Ford, the widow of former Toronto mayor Rob Ford, and her emergence from the shadows of grief and the larger Ford family.

Wiens asks Ford a grand total of four questions that appear in the broadcast. Two are conversational follow-ups. The third, while door-knocking, is, “Do you know this house?” Finally, after a long-time Ford family supporter agrees to sport two signs in her front yard, Wiens cheerily asks the candidate, “So these are your first official signs out there, eh?”

Arguably, the segment’s hardest-hitting question comes from a young boy, playing outside with his sister, who asks Ford, “Do you live in a mansion?”

Metro Morning’s profile of Ford is merely the latest in a remarkable run of normalization for the PPC, all in spite of its promotion of far-right conspiracy theories and climate change denialism, its repeated association with racists, xenophobes, and other bigots, and its unabashedly anti-immigrant platform.

Since January, the nascent party has obtained official registration with Elections Canada, secured an invitation for Bernier to participate in the official leaders’ debates, and nominated candidates to run in over 95% of ridings across the country. (God bless Nunavut and Prince Edward Island, which according to the party’s website, are fielding no PPC candidates.)

As a point of comparison, it took the Green Party of Canada 20 years to run candidates in more than 50% of ridings, and 30 to be included any of the leaders’ debates.

Beyond electoral benchmarks, the PPC has benefitted from a wealth of media coverage, including Bernier’s September 24 sit-down with the editorial board of the Toronto Star.

I want to thank the Star’s editorial board for the cordial meeting this morning, even though they made it very clear they did not agree at all with what I was saying! https://t.co/FmcvOk8uRy

In the typically reclusive Ford, Bernier has found a candidate whose membership in one of Ontario’s foremost political families lends further credibility and familiarity to his party’s brand. (Her brother-in-law, after all, is the current premier of Ontario, notwithstanding their recent, messy falling-out.) Primarily due to Ford’s name recognition, her riding of Etobicoke North was identified by the party as one of the five most likely to vote PPC; when a poll confirmed that she indeed has a (very narrow) shot, this became an important factor in the decision by the Leaders’ Debates Commission to include Bernier in the debates.

They have a glossy website. They have lawn signs. They are on the ballots, in the debates, in the news.

All of this makes the party seem — like the sounds of Metro Morning — simply normal, an appearance they are surely eager to cultivate.

But this is not a normal party.

Theirs is not acceptable discourse.

The PPC is, first and foremost, an anti-immigrant party.

Though not quite a single-issue party, its keystone campaign planks are, without a doubt, the reduction of immigration and the end of official multiculturalism in Canada.

The party proposes to slash immigration rates by over 50% and to reform the immigration system so that Canada only welcomes “the right kind of immigrants.” These, we are told, are newcomers who more readily adopt “Canadian values.”

The PPC’s official literature does not indicate precisely which immigrants it believes to lack the appropriate values, but it is clear that the primary group they have in mind is Muslims, signalled through an orchestra of familiar dog whistles about “Islamism,” Sharia law, and the separation between church and state (because this is really a hot-button political issue in 2019).

To a coterie of white supremacists and Islamophobes, the message is coming through loud and clear: Bernier is their man.

The PPC, then, is categorically not just another party, and it should not be treated as such, not by ordinary citizens, not by the Toronto Star, and not by Metro Morning, whose segment on Renata Ford contained precisely zero questions about the party’s anti-immigrant, xenophobic, climate-change-denialist platform.

Again and again, mainstream media outlets have proven utterly unable to grasp that far-right and white supremacist activists and politicians are not worthy subjects of human-interest stories. If anyone should be expected to do better, it’s Metro Morning, typically a shining light for inclusion in an increasingly chauvinistic world. But they did not.

The days of warning about being lulled into accepting racist and xenophobic ideas as normal parts of popular discourse are over.

We have already been lulled.

We need to wake the fuck up.

Edward Dunsworth is a historian of Canada and global migration and a SSHRC Postdoctoral Fellow in the Department of History at York University in Toronto. He tweets @ehewey.

Original image of Ford via her campaign site.