In walking back its ban last week of retiring journalist Linden MacIntyre, the CBC presented the public with an official version of events which describe the decision to punish MacIntyre as a "heat of the moment" mistake by one CBC manager, Jennifer Harwood. CANADALAND has learned that this is not true.
By Jesse Brown
Share 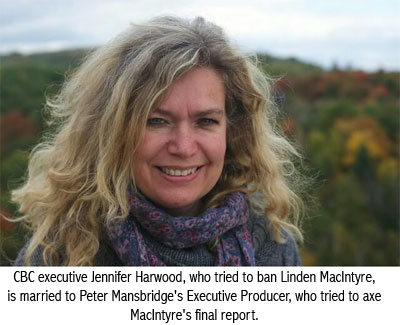 In walking back its ban last week of retiring journalist Linden MacIntyre, the CBC presented the public with an official version of events which describe the decision to punish MacIntyre as a “heat of the moment” mistake by one CBC manager, Jennifer Harwood.

CANADALAND has learned that this is not true.

“My note was written in the heat of the moment. Linden has now apologized. I think it is time to move on.”

“It was really an e-mail in the moment.”
– Jennifer McGuire, General Manager and Editor in Chief, CBC News

The night Jennifer Harwood sent her email memo, titled “Standing up for Peter Mansbridge” to her CBCNN staffers, her husband Mark Harrison, the Executive Producer of The National, also tried to exact vengeance on Linden MacIntyre for his comments about Peter Mansbridge.

Williamson refused, and Harwood’s memo seems to have followed. If she and her husband could not prevent MacIntyre’s last piece from airing, they would certainly not allow him to promote it on their broadcasts.

Harrison called an all-staff meeting of The National the next day, the purpose of which was to address the MacIntyre situation. At this meeting, CBC manager Paul Hambleton reportedly said that “we should drag MacIntyre in here and make him fall on his sword.”

Harrison and Hambleton did not respond to CANADALAND’s requests for comment.

Linden MacIntyre himself points out to CANADALAND another problem with the official CBC messaging. Again, according to Harwood:

“My note was written in the heat of the moment. Linden has now apologized. I think it is time to move on.”

The suggestion that MacIntyre’s apology to Mansbridge followed Harwood’s memo banning him from CBC News Network is false, says MacIntyre.

“To develop a story that I’ve been disciplined and then apologized because I’ve been a bad boy is incorrect,” says MacIntyre, who tells CANADALAND he’s “annoyed” by the CBC’s revisionist history. The truth, he says, is that as soon as he saw his comments to The Globe in print, he realized that he had misspoken and immediately sent Mansbridge an email apology as a courtesy to a colleague.

MacIntyre further clarified that he stands by the gist of his statements about Mansbridge. His error, he says, was to carelessly juxtapoze Mansbridge and Gzowski with Ghomeshi, whose alleged crimes are extreme. “There was no intention to tie (Mansbridge) to a criminal,” says MacIntyre.

However, the main thrust of his statements: that CBC fuels a culture of celebrity, that this leaves temporary and contract workers vulnerable, and that Mansbridge is known to have acted abusively to his subordinates, MacIntyre does not apologize for.

MacIntyre says that Mansbridge responded to his apology that night with a curt “thanks”. But this recognition of the apology did not prevent Harrison and Harwood from taking their own punitive measures.

“What I did was not as stupid as (Harwood’s) memo,” says MacIntyre.

CANADALAND’s sources within the CBC have concerns beyond the immediate dust-up between executives and on-air personalities.

In an organization still reeling from the Ghomeshi affair, this new incident has CBC workers questioning how serious management really is about creating a culture where abusive behaviour can be reported by anyone.

“If they’re willing to throw Linden under the bus,” said one source, who did not wish to be identified, “imagine what they would do to a nobody who complained about Mansbridge?”

Linden MacIntyre also noted the dissonance between a CBC that claims it wants to create a safe place for its employees and one that continues to protect its stars and punish their critics.

“What Harwood did,” says MacIntyre, “was an embarrassment to the organization at a sensitive time. She almost validated the culture that allowed Ghomeshi to be tolerated.”