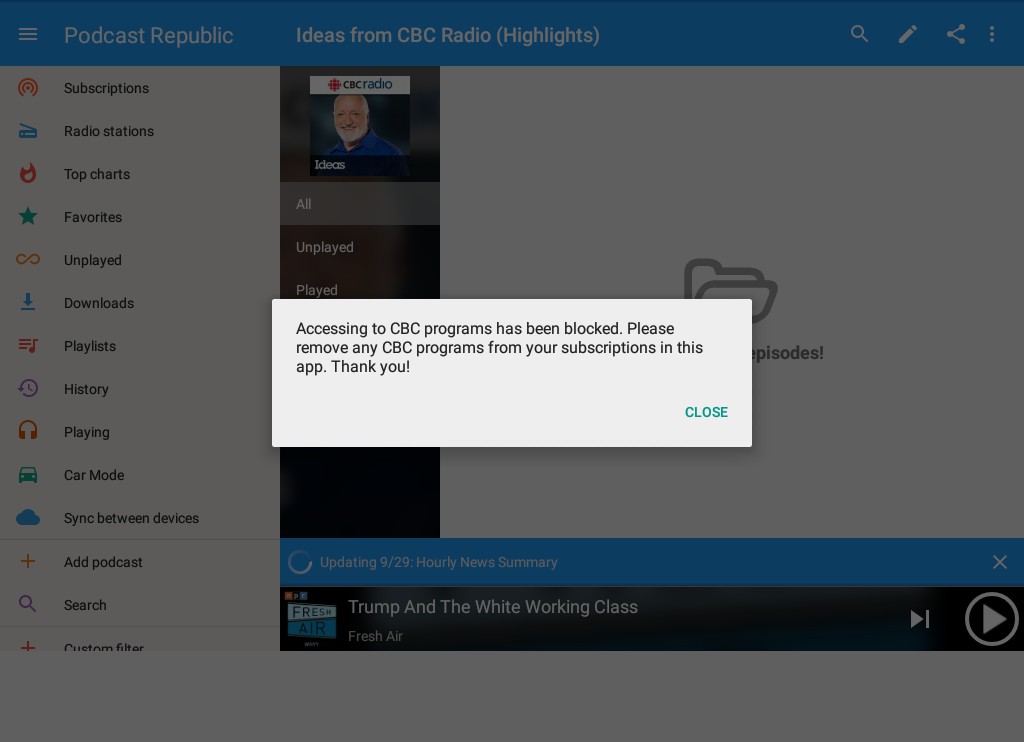 A spokesman for CBC wouldn’t say which app was served notice, but users of the Android app Podcast Republic found this week they couldn’t download CBC shows anymore. Turns out, that was by design. The developer blocked all the programming, at the request of CBC.

@etrodrigues @cbcradio @mebuell It's not a bug. All CBC programs have been blocked by this app per request from CBC.

The broadcaster has begun warning third-parties running ads they are in violation of CBC’s terms of service. A copy of the email was posted to reddit, with the name of podcast app that received it removed:

I am contacting you regarding the unauthorized use of CBC’s podcasts that are being used in your [app name] app.

By using CBC’s digital services you have agreed to our our Terms of Use located at cbc.ca/aboutcbc/discover/termsofuse.html.

Under section 2(b) of these Terms of Use, you are prohibited from using our podcasts for commercial purposes without a proper licence from CBC.

I would ask to cease immediately the use of our unlicensed podcasts.

I would be happy to have a call to discuss further our content and services.

The section of CBC’s terms of use they point developers to reads:

Do these terms of use apply to news feeds (RSS)?

Yes. These terms also apply to the use of CBC/Radio-Canada news feeds. Any use other than for private purposes must be subject to an agreement specifying the conditions for use with due regard for the integrity of the content. You agree not to frame the news feed or its content, nor to use similar means to generate unauthorized benefits.

“Unauthorized benefits” in this case seem to include money from advertising. CBC spokesman Chuck Thompson said the public broadcaster doesn’t allow any third-party to use their programming and offer ads, without an explicit agreement in place with CBC.

Apps use news feeds provided by different podcasters to update their content. A podcast RSS feed is essentially a database that shows an app what episodes of a show are available, and where to download them. CBC’s feeds are all publicly available.

But, Podcast Republic is far from the only podcast player that has in-app adds. Android app PodcastAddict displays banner adds, so does Overcast for iOS devices. Stitcher, another popular service, has display and audio ads. Podcast Republic, like many others, also offers users the option to pay a fee to use the app ad-free.

Thompson would only say that one developer had been sent the notice, but would not divulge which one.