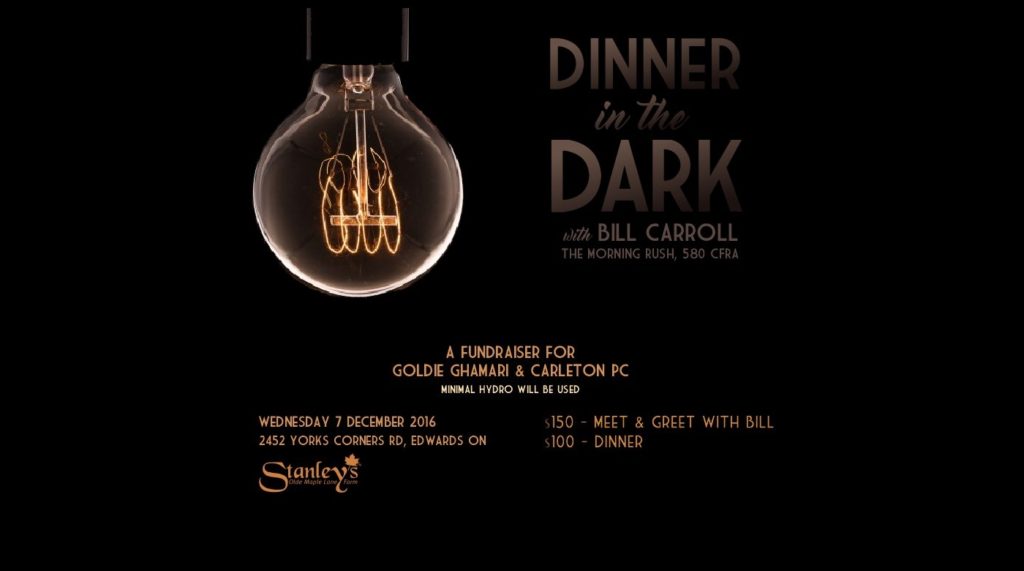 The morning show host on Ottawa’s most popular news talk station will headline a political fundraiser for the Ontario PC Party next month, in what appears to be a clear conflict of interest.

Bill Carroll, host of CFRA’s Morning Rush, will be the headliner at an early-December fundraiser for Goldie Ghamari and the Carleton PC riding association. The fundraiser is billed as “Dinner in the Dark” an event using “minimal hydro.” For $100, guests get dinner and will hear Carroll speak. For $150, donors get attend a “meet and greet with Bill.”

The director of Bell Media’s news and local stations division, Matthew Garrow, said there was no problem with Carroll appearing at the fundraiser. “It is important to note that Bill’s talk show is not a news program, but instead an opinion show that, by definition, reflects his personal views and opinions.”

“Bill is not a reporter, but instead his role is like that of a columnist — one who is clearly opinionated but entirely open minded to the facts of the issues he raises during his show,” Garrow said.

At other news organizations, columnists are treated no differently than reporters. They don’t typically offer themselves to politicians looking to fundraise. In many cases it is explicitly prohibited.

Garrow said Carroll was not being paid for his appearance. But Garrow did not reply to follow up questions. He was asked whether Carroll’s appearance would be considered a donation of his services, as laid out in the Ontario’s election finance laws. He also did not respond when asked where the line is drawn for staff at Bell news organizations for political participation. If we receive an answer, we’ll update our story.

Carroll has said on Twitter he does not consider himself a journalist, despite being an on-air host at a station billed as “news talk radio.” He’s a frequent and vocal critic of Ontario Premier Kathleen Wynne’s government, but said he would appear at a Liberal event if he were ever asked.

@davidreevely and I would speak at a Liberal event too if they asked.

Ghamari is the provincial Tory candidate* in the Ottawa-area riding of Carleton.

*CORRECTION: A previous version of this story incorrectly stated Ghamari was a candidate for the PC nomination in her riding. That was incorrect, she’s already won the nomination. We regret the error.