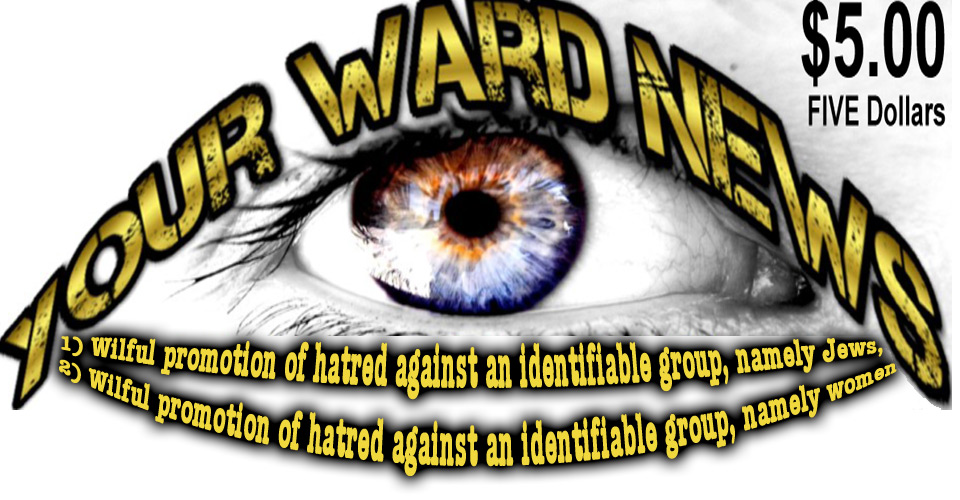 On Wednesday, Toronto Police arrested James Sears and Leroy St. Germaine, the editor and publisher of Your Ward News, Canada’s largest pro-Nazi newspaper. They surrendered to the police and are each charged with two counts of wilful promotion of hatred against an identifiable group, namely Jews and women.

It is believed to be the first time that hate crime charges have been laid on the grounds of promoting hatred towards women in Canada. Your Ward News — and its editor, James Sears — have advocated for and defended sexual assault against women and underage girls.

I can tell you, from experience, that "women" has never been included in a propganda charge only in last couple of years has gender been include in that legislation. Congrats that is a first. You just made Canadian law history

These charges are, however, just the latest development in a years-long effort by a coalition calling itself Standing Together Against Mailing Prejudice (STAMP) to stop, by legal means, a gleefully bigoted publication whose unsolicited delivery to tens of thousands of homes causes regular distress to both those it targets with frequently violent imagery, as well as those who unwillingly receive it at their doors.

“We expect to easily beat these politically-motivated charges,” Sears tell CANADALAND in an email, adding that their defence will include a challenge to the constitutionality of the hate-speech section of the Criminal Code, “as it violates our right to free expression. We want it repealed.”

(In July, hate-speech charges were laid against another pseudo-media figure, Kevin J. Johnston, following numerous Islamophobic statements on his website and YouTube channel.)

In addition to the hate charges against Your Ward News, there are further ongoing legal proceedings against them in the criminal courts, civil courts, and at a hyper-obscure federal government panel convened for the specific purpose of determining whether the Minister of Public Services and Procurement was justified in issuing an order prohibiting Canada Post from delivering the paper.

Warren and Lisa Kinsella brought a private prosecution against Sears and St. Germaine in June for allegedly uttering death threats when Sears wrote that “some hothead who cares deeply about me and my family, would lose it and do something illegal, like bludgeon the Kinsella’s [sic] to death.” The Crown is proceeding with the case.

Lisa Kinsella is also suing Sears for defamation in connection with material published in the summer 2017 issue. She is being represented by Marie Henein’s law firm.

It remains to be seen what impact the new hate charges will have on the Board of Review process, but a large part of the argument put forward by Your Ward News as to why it was wrong to cut off their access to Canada Post was that they had not been charged with a hate crime. Now they have.

What is Your Ward News?

YWN is a paper that claims distribution to 305,000 homes and businesses — mostly in Toronto’s east end, but also throughout the Greater Toronto Area and elsewhere in Ontario. The quarterly (previously monthly) flier is overtly anti-Semitic, racist, homophobic, and misogynistic.

It has run cartoons featuring a nearly naked Black woman in chains on her hands and knees and of human rights lawyer Richard Warman in a gas chamber being operated by a Nazi German Shepherd. The police and politicians get complaints every time it shows up at people’s homes.

The Toronto Police Service began investigating YWN for criminal hate speech back in March 2015. Warman submitted a formal criminal complaint this past September.

Its editor-in-chief, James Sears, is a self-proclaimed pickup artist, former doctor who was stripped of his license after pleading guilty to sexual assault, and leader of the neo-Nazi New Constitution Party. He is a Holocaust denier and self-professed “Hitler fan,” who promotes sexual assault as “NORMAL male courtship behaviour.” He says the paper is satirical.

According to YWN, the paper continues to be distributed by private companies and volunteers following the Canada Post ban, and its distribution area has continued to expand.

In the June 2015 edition, Sears wrote: “Only 10% of our operating budget comes from paid advertising. Even if we lost every single advertiser, we could easily cover the lost revenue from our donor base. There is a misconception that I am the only donor, but nothing could be further from the truth. We have dozens of big donors, some from as far away as Texas and Germany.”

An obscure government panel is attempting to determine whether the minister responsible for Canada Post was justified in making a 2016 order halting its distribution of Your Ward News. While the Board of Review can only issue a non-binding recommendation to the minister, its finding will set a modern precedent for the legality of distributing hate material through the mail.

It has also raised a larger debate around what is hate speech and what is free speech, and whether the government, through Canada Post, can refuse to give a platform to what it considers hate propaganda.

The last time a Board of Review was convened and held hearings was in 1981, after the government revoked the mail privileges of neo-Nazi Ernst Zundel. The privileges were eventually restored on the board’s recommendation, and Zundel was later deported to Germany and arrested as a Holocaust denier.

In May 2016, Judy Foote, then Minister of Public Services and Procurement, issued an interim prohibitory order against Sears and publisher/owner St. Germaine following sustained advocacy by STAMP.

Under a seldom-invoked section of the Canada Post Corporation Act, the minister may issue such an order if she believes on reasonable grounds that a person is using (or intending to use) the mail to commit an offence. In this case, the offences alleged were criminal libel and the distribution of hate propaganda.

The order revoked Sears and St. Germaine’s mailing privileges and meant that Canada Post could no longer distribute YWN, which was welcome news to its mail carriers, who were targeted by the publication after they objected to having to deliver it.

The order also gave Sears and St. Germaine the opportunity to trigger a Board of Review process, to determine if the minister was justified in issuing the order. The minister picks who sits on the board, based on recommendations put forward by the ministry.

After the board delivers its report, the minister must consider it and decide whether to rescind the prohibitory order (either with or without conditions) or make it permanent.

Prior to the board’s first hearing, lawyers for Sears and St. Germaine gave formal notice to the Attorney General of Canada that they intend to argue that prohibitory orders are unconstitutional.

YWN and its allies believe that the law allowing prohibitory orders violates section 2(b) of the Canadian Charter of Rights and Freedoms, which guarantees freedom of expression. They believe that it’s not constitutional for a minister to determine what should and should not be distributed through Canada Post.

Those supporting YWN at the hearings as recognized intervenors include Paul Fromm, whom the Southern Poverty Law Centre considers a prominent neo-Nazi. Intervenors against YWN include prominent Jewish organizations B’nai Brith Canada, Friends of Simon Wiesenthal Centre, and the Centre for Israel and Jewish Affairs.

“Your Ward News and/or those involved have repeatedly published neo-Nazi and misogynist hate propaganda, including advocating the rape of women,” says lawyer Warman, who prior to the order had filed a human rights complaint against the government and Canada Post for facilitating its distribution.

YWN is also supported by the Canadian Civil Liberties Association, which is defending YWN’s mail privileges. According to a June 9, 2016, letter sent by the CCLA to Minister Foote, its position is that even if the minister did have “‘reasonable grounds to believe’ that an offence is being committed by an individual, [that] should not allow for the prior restraint of all publications being distributed by that individual.”

“When [Your Ward News] is using the n-word, when they’re advocating binding and raping women, when they’re depicting Jews as dogs, when they’re denying the Holocaust — all of these examples, they’re not speech. They’re not free speech,” says Warren Kinsella. “They’re hate propaganda under the definition in the Criminal Code.”

The Board of Review has decided that it will consider the constitutionality of the minister’s order to prevent distribution of YWN through Canada Post. However, in its recent ruling on preliminary issues, the Board noted that it “merely issues a report that is ultimately advisory in character.”

“The new charges,” says Sears, “will have no impact on the Board of Review.”

But Warman, one of the intervenors, isn’t so sure.

“The government order that prohibited James Sears and Leroy St. Germaine from using the mail was issued on the basis that they may have been using Canada Post to commit the Criminal Code offence of the wilful promotion of hatred,” he says. “Sears and St. Germaine have now been charged by the Toronto Police Service with that exact offence. The Board of Review is master of its own proceedings, but I’ll be asking them to suspend the hearings indefinitely until the criminal charges are dealt with.”