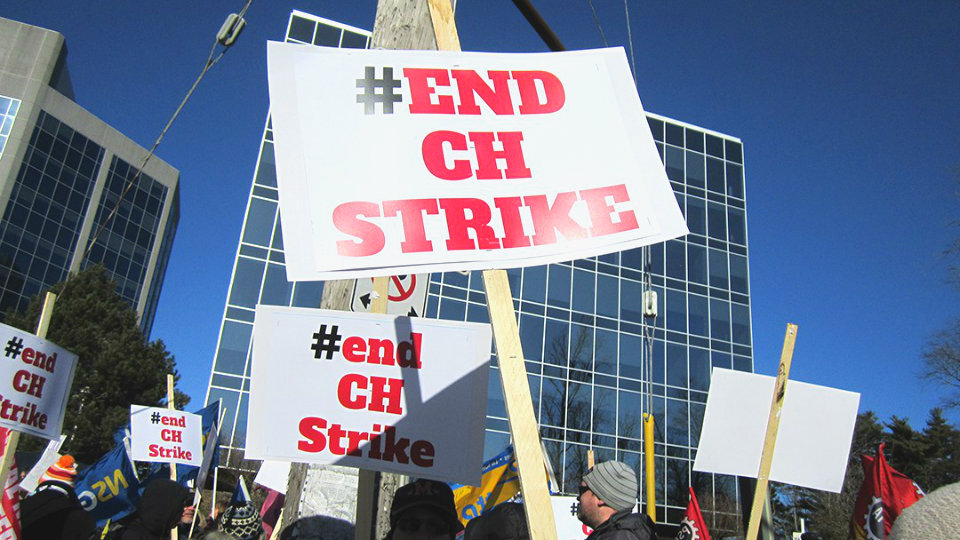 Chronicle Herald Employees Back On The Job, Working Alongside Scabs Who Replaced Them

It's been reported that scabs had gotten government communications staff to edit their stories.
Article By Maggie Rahr
Share

An acrimonious year-and-a-half-long labour disruption at Nova Scotia’s largest newspaper, the Chronicle Herald, is over. A deal reached including wage cuts and increased hours will see fewer than half of 61 newsroom employees return to work today.

But a thorny issue remains: the journalists and support staff who are returning will be working alongside non-guild replacement employees (scabs), whose published output included embarrassing errors [jpg] and woefully deficient reporting during the 18-month strike.

On the same day Halifax Typographical Union (HTU) members voted 94% in favour of returning to work, the online subscription-based news outlet allNovaScotia published a damning report on tactics used by replacement workers during the strike, involving (non-union) editorial staff allegedly taking copy from allNovaScotia, and then sharing that copy with Halifax Regional Municipality (HRM) communications staff for verification and editing in advance of publication. (The timing of the resolution and the publication of the story was coincidental, as it aligned with the city’s release of freedom-of-information documents.)

During the strike, errors, examples of copy-lifting, and outright poor editorial judgment in Chronicle Herald articles were well documented by other media.

But this latest example, outlined in a story by Geoff Bird, has led allNovaScotia publisher Caroline Wood to call upon William Kaplan, the provincially-appointed mediator and commissioner of the inquiry into the Chronicle Herald strike, to examine what she calls “systemic violation” of content.

Using documents obtained through freedom-of-information requests, Bird’s story lays out multiple instances in which Herald replacement workers appear to have copied elements from allNovaScotia stories (protected behind an iron-clad paywall that serves 10,000 paying readers) and then passed them on to HRM communications staff for vetting.

It isn’t an uncommon practice for journalists to confirm phrasing or facts with sources to ensure the work is correct. But allowing media contacts to fully edit stories goes against widely held journalistic standards.

“Once they’re editing your copy, it’s no longer an independent account,” says Ryerson journalism professor Ivor Shapiro, who specializes in ethics, “and if it isn’t independent, it isn’t journalism.”

Shapiro says it’s no surprise this happened, given that the replacement staff were “paid so shabbily, hired so carelessly,” and would be “unlikely to have the training, the experience, or the ethical grounding to do the job properly.”

When allNovaScotia contacted the Herald reporter in question, he responded with legal threats concerning defamation and harassment, and declined further comment. Wood stands by allNovaScotia’s work. She says she can’t comment on potential legal action against the Herald at this time.

Both HTU and the Herald credit Kaplan in his role as mediator for delivering a resolution. But some say the province (which is no stranger to labour battles under premier Stephen McNeil’s leadership) should have brought him in much sooner. In fact, the union asked for a mediator, and was turned down three times before the government agreed to step in.

Being expected to work alongside non-union staff in the Chronicle Herald newsroom is adding insult to injury for many staffers, who are returning to their jobs after a stretch that encompassed two bitter winters on the picket line.

“I don’t even know where the newsroom is anymore,” digital editor Pam Sword jokes, explaining that the entire department was reshuffled during the strike and possibly moved to another floor of the building.

Sword, a single mother, calls to her 17-year-old in the next room, “What’s the last year been like for us?” She laughs and repeats her daughter’s answer: “Hell.”

The question of how closely journalists will be expected to work shoulder to shoulder with the replacement workers who will be kept on (some have been laid off) remains unclear.

During the strike, the union lost jurisdiction over the editorial desk, which is now called the “production hub.”

Editors who are returning will be doing so under different titles. And that has some concerned about potentially being expected to take orders from the replacement staff, who crossed the picket line over the course of the 18 months.

But a glimpse of the latest copy of the collective agreement between The Halifax Herald Ltd. and HTU, obtained by CANADALAND, shows that there will be some limits imposed on non-guild staff. Namely, the restrictions appear to allow them to only engage in such duties as posting content to social media, writing headlines, and editing photos.

“It will be a process,” admits Sword, who used to lead a team of up to five digital editors. “My department’s gone.”

The newsroom Sword is returning to will look different, too. The Herald was never held up as a beacon of diversity, but after losing staff to other news outlets (crime reporter Dan Arsenault is now with the Newfoundland branch of allNovaScotia; longtime reporters Sherri Borden Colley, Michael Gorman, and Frances Willick have all been picked up by CBC Nova Scotia), as well as more than 20 layoffs, the “new” newsroom will be all white, and mostly over 50. Only two female journalists, and an administrative staffer, out of 25 employees remain.

When Sword returns to her job, she’s also leaving another behind. Local Xpress, an online news service launched in the wake of the strike, powered by hungry-to-stay-in-the-game, out-of-work Herald journalists, was competitive in the local news industry. The site garnered an impressive 13.2 million page views during its run and even won several Atlantic Journalism Awards.

(In order to obtain strike pay, HTU members could either elect to walk the picket line for the required weekly hours or work for Local Xpress.)

King’s Journalism professor Stephen Kimber calls Local Xpress a “labour of love,” citing some of its work as “marvellous” and “even better than pre-strike Herald.”

But for anyone wishing to revisit the nearly 7,000 stories it posted, Local XPress’s website, and content, is currently “on hold” as negotiations between HTU and the paper concerning its future continue.

One option being discussed, though not warmly received, involves posting the work on the Herald’s site, and removing all Local Xpress branding.

But still, the end of the strike comes as a relief, even for those who won’t be returning. Among them is laid-off editor Stephen Forest, who spent 31 years with the Chronicle Herald.

“It’s good for everybody.”

Forest says the team that is returning will be “every bit as talented as the last day they worked,” pointing to Local Xpress’s achievements.

Some have simply decided not to return, including Monty Mosher, who joined the Herald in 1984.

“Being a sportswriter has been my life’s work and joy, but I have grown weary of the industry, and the misery of the 18-month strike has taken a toll I can’t begin to describe,” he wrote on Facebook.

Sword, for her part, says she’s going back not only more equipped, having learned so much at the helm of Local Xpress, but with a firmer sense of solidarity.

Before the strike, the union hosted a training session put on by the Canadian Federation of Labour for its members in the likely event of a work disruption.

“These guys in the labour movement were using the term ‘economic violence,’” she remembers, saying that at the time she simply thought, “These guys are pretty intense.”

But after watching colleagues struggle to pay bills, rely on the union and donations from the public just to pay for groceries, all the while walking alongside sick and pregnant colleagues on the picket line, she says her perspective changed.

“It toughened us up.”

Sword, along with colleagues who will and won’t be returning to work, are facing orders under the collective agreement not to speak in a way that may be seen as “disparaging” to the paper. (Even those walking away, in doing so, could put their severance at risk.)

But Kimber can fill in the blanks.

“It is going to be very difficult,” he says. “There’s a lot of bitterness there, and it’s justified.”

“At the same time,” he says, echoing Sword’s sentiment, “they can depend on each other, being forged in the fire of that terrible strike for so long.”

Heather Desvereaux is one of many non-guild employees who will be staying on, as reporters and editors return to the newsroom. “It’s their transition I am concerned about more than my own,” she says.

Requests to interview Sarah Dennis and Mark Lever, the married, joint leaders of Saltwire Network — which owns the Chronicle Herald along with more than 30 smaller rural newspapers purchased during the strike — were not returned.

As the paper prepares to reopen its doors to its old employees, and contends with the allegations laid out by allNovaScotia, Kimber has a word of advice for Saltwire’s co-owners. “Apologize. To allNovaScotia.com, to the public,” he says.

But he hastens to add: “I don’t expect them to.”

Maggie Rahr is a Halifax-based freelance journalist who worked with allNovaScotia in the early 2000s and has known its publisher, Caroline Wood, for longer.

Photo via the Nova Scotia Federation of Labour.