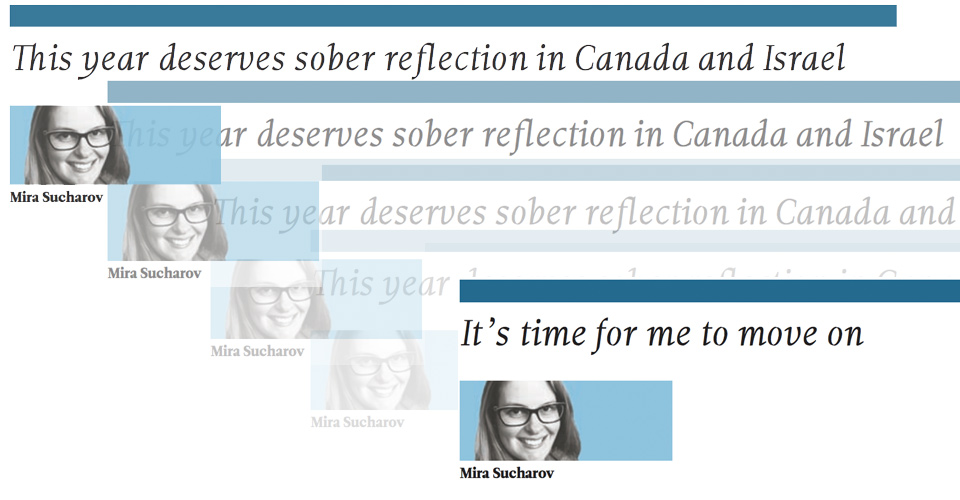 "I felt like a geologist who had been hired to write a column for the community paper of the Flat Earth Society."
Analysis By Alex V Green
Share

In every interview I’ve heard with the editor of the Canadian Jewish News, Yoni Goldstein has defended his publication’s commitment to political diversity by pointing to one columnist: Mira Sucharov.

Earlier this year, when CANADALAND started looking into the politics of Jewish community media, I wrote about the Canadian Jewish News, Canada’s only national Jewish newspaper. In that article, I took the CJN to task for its complicity in a pattern of marginalizing certain points of view, particularly concerning conversations around the State of Israel and its place within the paper’s pages. It was Sucharov who offered a shining light of variety and complexity in what otherwise felt like a litany of exclusively pro-Israel voices.

Last month, Sucharov resigned from the paper, writing on Facebook — later echoed in her farewell missive — that she “felt like a geologist who had been hired to write a column for the community paper of the Flat Earth Society.”

Sucharov is an associate professor of political science at Carleton University, as well as a contributor to publications like The Walrus, HuffPo, Haaretz, Forward, Jewish Currents, and others. Her columns, usually about Jewish politics and community discourse, are often progressive, thoughtful, and well-sourced — the kind of thing you would expect from an associate professor of political science, really.

But her approach was apparently not widely adored, and there is a price to be paid for prompting unwanted conversations.

In the donor-dominated world of community bureaucracy, some topics are untouchable territory. Crossing that line can get you pushed off of boards, dropped from panels, and forbidden from taking up space.

If the pages of the CJN are any indication, pieces involving xenophobia, historical revisionism, right-wing dog whistles, conspiracy theories, and fear-mongering are a-okay. Criticism of Israel, on the other hand, is beyond the pale. And while it would certainly be unfair to misrepresent the CJN as inflexibly right-wing, its coverage of Israel and community discussions around Israeli politics is noticeably one-sided.

In her second-to-last piece for the paper, Sucharov argued that Canadian Jews have a responsibility to consider the role of occupation in the coincidental anniversaries of Canada’s Confederation and Jerusalem’s annexation.

The response was immediate, and aggressive. Comments, emails, and calls for dismissal flooded in. Massive reader blowback from something as simple as using the word “occupation” was just too hostile to sustain; to Sucharov, it signalled an end to constructive dialogue.

“As much as I have an idealistic view of reforming from within and bringing new voices to the table, I learned that it’s just ultimately not welcome,” she says in an interview. “I had one reader email me privately who said that Israel is like our child, and so it shouldn’t be criticized publicly.”

Sucharov herself has spoken about this situation before. In fact, she nearly left the CJN over it a year earlier. In an episode that Sucharov later wrote about in part for the Jewish Independent, the issue was over the CJN’s sidelining of the Jewish anti-occupation collective Independent Jewish Voices.

Despite its significance in the community, IJV has been effectively barred from the paper, receiving sparse and usually unflattering coverage for its pro-Palestine stances.

“IJV is considered a voice beyond the pale for the CJN editorial boundaries,” says Sucharov. “And that’s not a position I agree with. I don’t agree that the IJV position should be excised from the pages of the paper altogether.”

The debate over IJV has long been a sticking point for the newspaper, even making its way on to CANADALAND during a debate between Goldstein and Treyf Podcast’s Sam Bick and David Zinman. Goldstein has argued that IJV — between their refusal to participate in pro-Israel activities and what he sees as their unwillingness to join with the wider community — is too far left to fit the mould, arguing that if the CJN included IJV, they would need to also shine a light on the far right.

Sucharov pushed back. “I don’t see them as equivalent,” she tells me. “The far right is the [Jewish Defence League], and they commit violence and intimidation.”

IJV articulated a similar sentiment in a statement regarding Goldstein’s claims following the CANADALAND interview. “Drawing false equivalencies between IJV’s views and the views of fascist groups is, at best, disingenuous,” read the statement. “We have certainly never engaged in the violence or extreme hatred exemplified by the far right of the Jewish community.”

Politics aside, Sucharov only spoke positively of the team at the CJN and doesn’t blame Goldstein for her decision to leave the paper. In her view, and to his credit, his willingness to go to bat for her when negative feedback became overwhelming was commendable. “To some of our readers, invoking the term ‘occupation’ was deeply offensive, triggering very real concerns about Israel’s security, highlighting the moral and intellectual bias the Jewish state faces, and questioning the ultimate viability of a Jewish homeland,” Goldstein wrote in early May.

Yet even his going to bat created problems. By framing the fact of Israel’s ongoing occupation of Palestinian territories as a matter of debate, Goldstein betrayed his publication’s disdain for Sucharov’s position. “Even there, the fact of the occupation is not treated as fact. It’s still treated as a point of debate,” she says.

Goldstein tells me he was surprised by Sucharov’s resignation, though he also understands her reasoning. He hopes they can continue to work together, and that this incident won’t change the ideological range of the paper too much. “I am confident that we will continue to reflect the breadth of opinions on display in the Canadian Jewish community,” he says.

Though her departure from the CJN was not an editorial choice, it still reflects the editorial sensibilities of Canada’s only national Jewish newspaper.

Last month, the CJN ran a reported piece on the Jewish Defence League that questioned the veracity of their alleged violence toward anti-racist protesters in Toronto. The CJN stands by its coverage, though has also acknowledged the JDL’s role in an anti-Arab hate crime that took place in March of this year. Following reporting by CANADALAND on an anti-Semitic screed published by Gavin McInnes of The Rebel, Goldstein was quick to offer excuses and explanations for the offensive rant, taking care to point fingers at Canada’s Muslim community for what he called the “real anti-Semitism.” The JDL has occasionally provided security for Rebel-related events.

The newspaper has operated as something of a bugle horn for pro-Israel lobby groups since it was purchased in 1971 by a group closely affiliated with the Canadian Jewish Congress, and has been described as a “lapdog” for the community’s conservative mainstream. Thus, when a newspaper operates on a flatly pro-Israel editorial stance, it becomes impossible for readers to expect anything different. If the editorial guidelines argue that some things and some voices just should not be published, it’s no wonder that publishing them can make life difficult for the sole writer who is tasked with doing so. Because until diversity is the norm, it will always be an easy target.