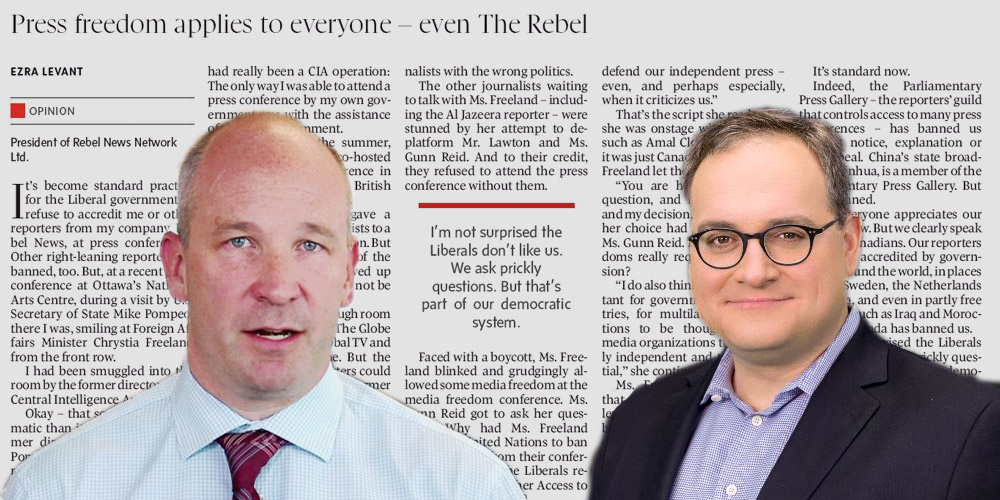 It was personally commissioned by the paper's editor-in-chief, according to newsroom sources
News Brief By Jonathan Goldsbie
Share

On Monday, The Globe and Mail published an op-ed from Ezra Levant, the founder and head of Rebel Media, affording the demagogic entrepreneur a platform to argue that his far-right online video channel, now in its fifth year of advancing anti-Muslim conspiracy theories, is little more than a band of “prickly” right-leaning journalists who have been unfairly marginalized by Canada’s governing Liberal party. At the same time that his site’s front page featured a video from longtime Infowars personality Paul Joseph Watson, claiming that “pathological progressivism” has led to a new sexual fetish involving “couples repeatedly getting pregnant then having multiple abortions,” Levant explained in Canada’s premier national newspaper that, simply, “Not everyone appreciates our point of view.”

According to two Globe sources with knowledge of the matter, the op-ed was personally commissioned by editor-in-chief David Walmsley, who pushed it through over the objections of editors in the paper’s opinion section.

On Tuesday afternoon, the leadership of The Globe and Mail’s bargaining unit distributed a memo describing the piece’s publication as a “a serious error in judgment,” stating that “On behalf of our members, we strongly reject management’s decision to publish this article.” (The full memo from Unifor 87-M’s Globe unit is at bottom.)

Neither Walmsley nor Levant, nor opinion editor Natasha Hassan, responded to requests for comment on the op-ed.

In an email to supporters, Levant — who is currently facing a formal criminal complaint alleging that he and his outlet have wilfully promoted hatred against Muslims — expressed gratitude for the credibility bestowed upon his company. “I’m grateful to them for giving me the platform,” he wrote, “because while The Rebel has a massive audience of ‘severely normal’ Canadians, The Globe and Mail is the newspaper of record for the Canadian establishment.”

He said he was “delighted” that the paper “asked me to write an op-ed detailing how the Liberal government has systematically been censoring conservative journalists, including us at The Rebel.”

He requested donations to help him “celebrate” the publication of the piece.

In an unrelated message to the Globe newsroom in early September, Walmsley affirmed his “audience-first” and “solution-based” vision for the paper. “Putting intellectual capital into the marketplace serves us well.”

But, he cautioned, “I cannot defend marginal theories. We are a mainstream media organisation for good reason so ideas that sit on the margins of the internet or the febrile incoherence of social media are not our business.”

I wonder how many people still believe the fire that consumed Notre Dame was an “accident”. https://t.co/Tc1X5H3YqN

I'm curious how the name of the Toronto shooter was withheld for a day, and the moment it was released, a Muslim reporter at the CBC state broadcaster issues an official statement from "the family" — that he was mentally ill, nothing to do with Islam.

11. Judging by their masthead, the Globe doesn't allow any Muslims into their office except through the servant's entry. They do give a forum to the Islamist extremists at @nccm though, so there's that.

Yesterday, a guest column appeared in The Globe and Mail’s Opinion section on the topic of press freedom in Canada. It was written by Ezra Levant, and the fact that it was published represents a serious error in judgment.

Mr. Levant, head of the far-right media outlet The Rebel, has a history of giving favourable coverage to white supremacists, wilfully promoting their racist rhetoric – even employing them as contributors. The Rebel does not practice responsible journalism in accordance with any reasonable standards of integrity. Publishing his undisputed claim of being a persecuted journalist legitimizes his viewpoint, and is harmful to the credibility of The Globe and Mail, as well as the reporters and editors we represent.

If interactions between The Rebel and the Trudeau government have news value, those should have been conveyed to the Globe’s audience through a balanced story reported by staff that included context on what makes Mr. Levant and his publication objectionable to many.

On behalf of our members, we strongly reject management’s decision to publish this article.